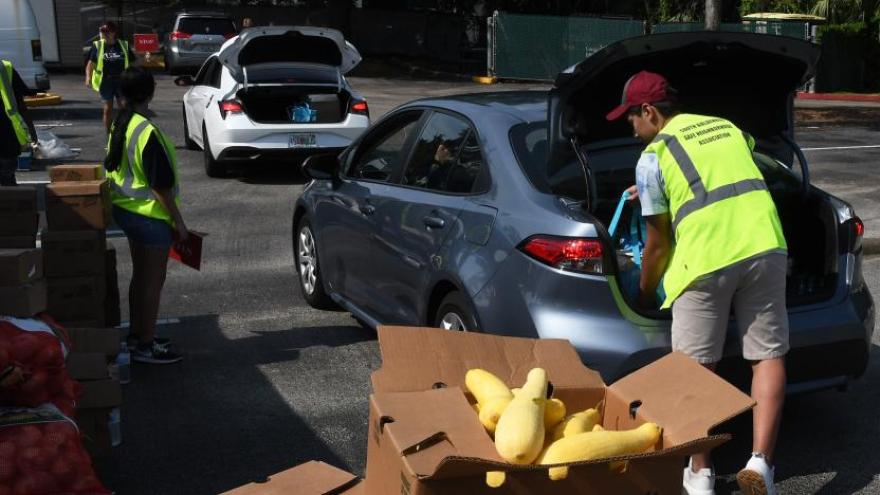 The Biden White House seeks to tackle food insecurity at the first hunger conference since 1969. Volunteers are pictured here loading bags of food into cars at a food distribution event for the needy in Orlando, Florida.

(CNN) -- Groceries cost 13.5% more than they did a year ago. Nearly 25 million adults live in households where there isn't always enough to eat. Some 40% of food banks saw increased demand this summer.

At a time when the affordability of food is in the spotlight, the Biden administration is hosting a White House Conference on Hunger, Nutrition and Health on Wednesday with the goal of combating food insecurity and diet-related diseases.

Overall, food insecurity has declined since former President Richard Nixon convened the first and only White House conference on food, nutrition and health in 1969, which led to nationwide expansions of the food stamp and school meals programs and the creation of the Special Supplemental Nutrition Program for Women, Infants and Children, known as WIC, among other changes. General economic growth and the reduction in poverty have also contributed to the improvements in food security in recent decades.

However, the Covid-19 pandemic and soaring inflation have increased the attention paid to food insecurity in the US over the past two years. The Biden administration released a 44-page playbook on Tuesday aimed at the "bold goal" of ending hunger by 2030 and increasing healthy eating and physical activity to reduce diet-related diseases.

Among the key proposals: expand free school meals to 9 million more children by 2032; allow more people to qualify for food stamps; broaden the Summer Expanded Benefit Transfer program to more kids; increase funding for nutrition programs for senior citizens; and improve transportation to and from grocery stores and farmer's markets, among other initiatives. Many of the efforts would need approval from Congress.

President Joe Biden announced at the conference more than $8 billion in private and public sector commitments as part of the administration's call to action.

"In America, no child, no child should go to bed hungry," Biden told those gathered at the conference Wednesday. "No parent should die of disease that can be prevented."

More than 100 organizations have made commitments, including hospitals and health care associations, tech companies, philanthropies and the food industry.

At least $2.5 billion will be invested in start-up companies that are focused on solutions to hunger and food insecurity, according to the White House. More than $4 billion will be dedicated toward philanthropic efforts to improve access to nutritious food, promote healthy choices and increase physical activity.

The President also urged Congress to make permanent the enhancement to the child tax credit, which was only in effect last year. Parents used the additional monthly funds to buy food and basic necessities, which Biden said helped cut child poverty in half and reduced food insecurity for families by 26%.

Congress has poured billions into special pandemic assistance programs aimed at enabling struggling Americans to have enough food to feed themselves and their families -- even as millions of jobs were lost in 2020.

"That's why it's so consequential that at the onset of the Covid-19 recession, the combination of fiscal support to households -- whether it is from the economic impact payments, unemployment insurance, refundable tax credits, enhanced SNAP benefits or pandemic EBT -- all combined to prevent an increase in food insecurity over the past two years," said Lauren Bauer, a fellow in economic studies at the Brookings Institution.

Food insecurity among children fell in 2021, reversing a spike during the first year of the pandemic, according to a recent US Department of Agriculture report. Some 6.2% of households with children were unable at times to provide adequate, nutritious food for their kids last year, compared with 7.6% in 2020, the report found. Last year's rate was not significantly different than the 2019 share.

And the prevalence of food insecurity in the families who have kids dropped to 12.5% last year, the lowest since at least 1998, the earliest year that comparable records exist.

But elderly Americans living alone and childless households both experienced an increase in food insecurity last year, the report found.

Overall, the share of households contending with food insecurity remained statistically the same in 2021 as the year before.

This lack of improvement in general food insecurity despite the surge in federal spending on food stamps, formally known as the Supplemental Nutrition Assistance Program or SNAP, is a red flag for Angela Rachidi, senior fellow in poverty studies at the American Enterprise Institute, a conservative think tank.

"When the solution is always 'let's just spend more on SNAP or spend more on school lunch or WIC,' I think that that's not always the best use of federal dollars," she said.

Rachidi would like to see more of an emphasis on nutrition and healthy eating, which are among the pillars of the White House conference.

"Many more people in the US die from diet-related disease than die from hunger," she said, noting the health problems caused by obesity, diabetes and other conditions.

The pandemic aid that helped keep Americans afloat has largely been exhausted, and Congress has shown little appetite to dole out more assistance -- even as high inflation is squeezing many families.

The share of people who say they live in households where there was either sometimes or often not enough to eat in the last seven days has climbed to 11.5%, according to the most recent US Census Bureau Household Pulse Survey conducted in late July and early August.

That's up from the 10.2% recorded by the survey in late December and early January, just after the final monthly child tax credit payment was distributed. The share had been even lower in the late summer and early fall of 2021, when the monthly installments were being sent.

Meanwhile, shopping in the supermarket is taking a bigger bite out of people's wallets. Egg prices have skyrocketed nearly 40% over the past year, while flour is 23% costlier. Milk and bread are up 17% and 16% respectively, while chicken is nearly 17% more expensive.

Starting next month, it will be a little easier for those in the food stamp program to afford groceries because the annual inflation adjustment will kick in. Beneficiaries will see an increase in benefits of 12%, or an average of $26 per person, per month. This comes on top of last year's revision to the Thrifty Food Plan, upon which benefits are based, which raised the average monthly payment by $36 per person.

Still, the upward march in prices has driven more people to food pantries, which are also struggling to stock the shelves amid higher prices.

Some 40% of food banks reported seeing an increase in the number of people served in July compared with June, according to a survey conducted by Feeding America, which has more than 60,000 food pantries, meal programs and partner agencies in its network. The average increase was about 10% more people. Another 40% said demand remained about level.

Many food pantries don't have the resources to meet this increased demand, said Claire Babineaux-Fontenot, Feeding America's CEO, noting that she's seen sites with nearly empty shelves but long lines out the door.

The network provided 1.4 billion fewer meals in the fiscal year ending June 30 than the year before.

The USDA announced earlier this month that it will provide nearly $1.5 billion in additional funding for emergency food assistance, which will help alleviate the supply shortages at food banks and pantries.

However, Feeding America feels more should be done. It recently surveyed nearly 36,000 people for their recommendations to end hunger. Many felt that food stamp benefits should be increased and eligibility should be expanded. Nearly half felt their communities need more food pantries, grocery stores and fresh food.

The recent infusion of federal funds will help pantries distribute more food, though it doesn't completely close the gap. And it will take time for the supplies to arrive, Babineaux-Fontenot said.

"Today, people are going to be looking for ways to feed themselves and their family, and there will be scarce resources for them to do that," she said.