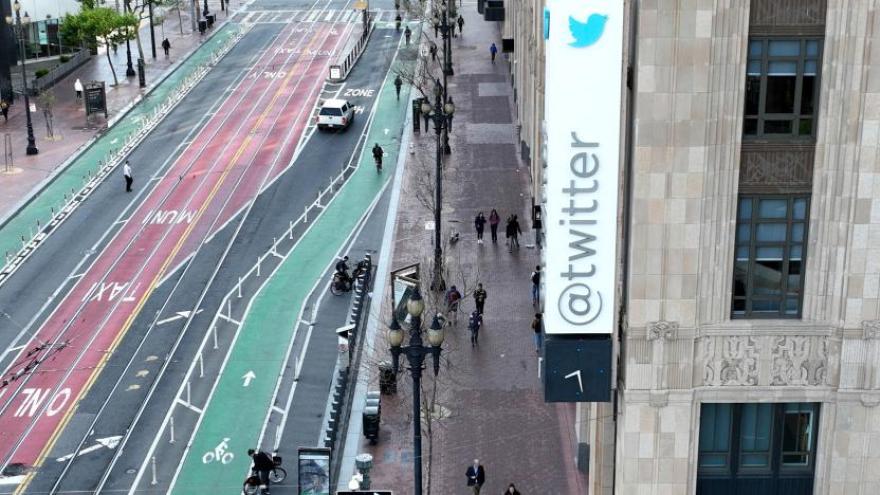 Foreign workers in the US are especially vulnerable to the Twitter turmoil. Pictured is Twitter headquarters in San Francisco, on April 27.

(CNN) -- Twitter employees who are relying on the company for work visas have been left in limbo, finding themselves at the whims of its new billionaire owner, knowing if they quit, they may have to leave the United States.

Earlier this week, Elon Musk gave remaining staff an ultimatum to commit to working "hardcore" or to leave. But some staff who would like to leave the company feel like they can't because doing so, may leave them no choice but to depart the US, multiple former Twitter employees told CNN.

In fiscal year 2022, Twitter had nearly 300 people approved to work on H-1B visas, according to US Citizenship and Immigration Services data. It's unclear how many have chosen to stay.

Facebook -- another company that's undergoing mass layoffs -- had more than 1,300 people approved to work on H-1B visas, the data shows.

Employees on temporary visas, like H-1B or other work visas, are especially vulnerable to the layoffs happening at Twitter and across the tech industry. Some staff who were on employment-based visas and have already been laid off by Musk have found themselves scrambling.

"Firing folks who are on a H-1B in a major economic downturn is not just putting them out of the job, it's tantamount to ruining their lives," one former employee told CNN, adding that some people who had accepted Musk's ultimatum had accepted it "out of self-preservation."

Fiona McEntee, an immigration lawyer based in Chicago, represents immigrants who are on H-1B visas and are part of the recent tech layoffs.

While McEntee stressed everyone's situation is unique, one of the primary challenges employees on H-1B visas face is that they have a limited window of time to find a new employer, adjust to another visa, or leave the United States. The 60-day grace period usually starts from the last day of employment.

"It's a short time period to line these things up." McEntee said, noting that filing a visa transfer, for example, can take time. McEntee's firm has been receiving multiple calls from people affected by the layoffs who are concerned about next steps.

"A layoff is hard enough on people to begin with but when you're faced with having to leave what's been your home for a significant time, it adds a whole layer of trauma to this," she told CNN.

One former Twitter employee described the challenges facing a former colleague who is in the US with his family on an employment-based visa and now faces the prospect of having to leave.

For that reason, some staff at Twitter who are on H-1B visas are staying on despite wanting to leave the company, a former employee told CNN, adding that they're "concerned with being forced into a flooded job market where they may be unable to find a job and before being forced out of the country."

The US Department of Homeland Security issues 65,000 H-1B visas annually as mandated by Congress, in addition to another 20,000 for those who have a masters' degree or doctorate from a US university. The visa can be granted for up to six years.

"These are people who didn't just necessarily arrive last year or the year before, or even when they were approved," said David Bier, associate director of immigration studies at the Cato Institute. Bier noted that some people may have been working for Twitter under a different visa before being hired on an H-1B.

"Many of these people will have been in this country for over a decade," Bier said.

One former Twitter employee stressed the importance of visa holders and their contribution to US innovation and technological leadership.

"For companies to turn their backs on them now is particularly callous and destructive and undermines the trust talented people have around in the world in the hope of America and its opportunities," they added.