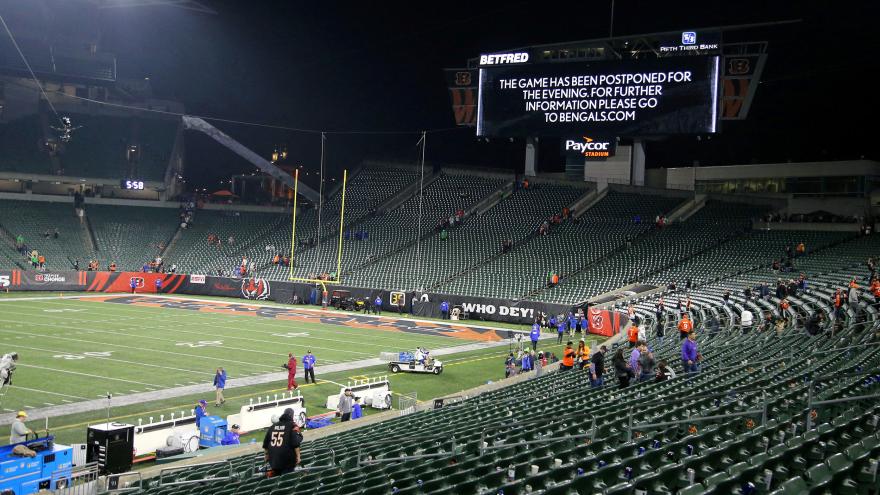 After the league announced late Thursday that the game will not be completed, the home-team Cincinnati Bengals notified fans who were in attendance that they will receive a credit for the price of their tickets and parking to be applied to their future purchases -- either upcoming playoff games or their 2023 season tickets. Refunds are available for fans who would prefer a credit.

The average ticket price for a non-premium seat to a Bengals game is about $88, the cheapest in the NFL, according to Team Marketing Reports, which tracks ticket prices. TMR estimates that the cost of all the tickets, both regular and premium seats, for the game came to about $6.7 million.

Although that's not insignificant, it's a drop in the bucket for the NFL, which had an estimated total league-wide revenue of $18 billion in the 2021-22 season, sources with knowledge of the league's finances told CNN. The gate at the missing game comes to about 37 cents for every $1,000 of league-wide revenue last year -- and the league's sales are expected to grow this year.

If it opted to replay or continue the postponed game, the NFL almost certainly would have needed to push back the playoffs that are set to start next weekend. That game likely would have received enormous fan interest and ratings approximating those of a playoff game or Super Bowl. But it would have posed logistical challenges for the league and its broadcast partners, which had made plans for almost a year for the upcoming playoff games.

The fans who bought tickets to the game on the secondary market, likely for more than the face value of the tickets, will likely have those purchases canceled by the resale service. The statement from the Bengals to fans said that's what Ticketmaster plans to do for tickets purchased on its Ticket Exchange service. Two other major resale services, Stubhub and SeatGeek, have not responded to questions about what they plan to do about their sales.

That means that ticketholders will lose the profit they might have received from selling the tickets, but those who bought the tickets won't be hit with the difference between what they paid, and what they could get in a refund.