Why were the midterm elections close? Exit polls offer clues. 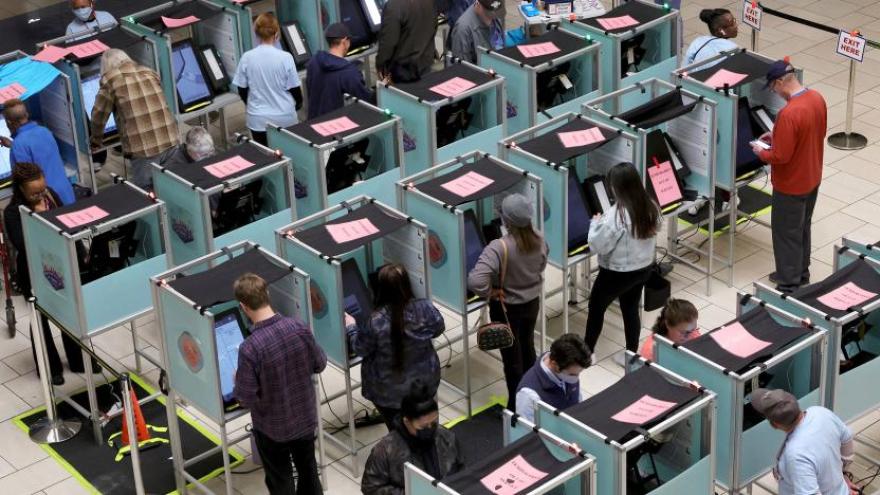 A set of countervailing political forces may have contributed to the closeness of this year’s midterm elections, according to the? current results of the national exit poll conducted for CNN and other news networks by Edison Research, and pictured people vote in Las Vegas on November 8.

(CNN) -- A set of countervailing political forces may have contributed to the closeness of this year's midterm elections, according to the? current results of the national exit poll conducted for CNN and other news networks by Edison Research. It remains uncertain which party will control either the Senate or the House of Representatives next year, with votes still being counted and key races too early to call.

Voters were broadly discontented with the state of the nation, the economy and President Joe Biden, the exit poll found -- the sort of political environment that conventionally leads to a midterm backlash against the party in the White House. But other factors, including views on abortion and Biden's predecessor, may have helped keep Democrats competitive across the country.

About three-quarters of voters said they were dissatisfied or angry about the way things are going in the US, and a similar share called the economy not so good or poor. Biden's approval rating was underwater among the electorate, with only about 44% of voters approving, and about 55% disapproving -- around 45% said they strongly disapproved. Voters were more likely to say Biden's policies had hurt than helped the country, and more likely to say their vote was meant to oppose Biden than to say it was in support of him.

A slim plurality of voters, about 31%, called inflation their top issue, and roughly 8 in 10 said inflation had been a hardship for them personally. By roughly a 12-point margin, voters said they trusted the GOP over the Democratic Party to handle inflation.

But the apparent closeness of the election suggests the midterms weren't solely a referendum on an unpopular president or a reaction to grim views of the economy. The Supreme Court's overturning of Roe v. Wade brought abortion to center stage, with about 27% of voters calling it their top issue. About 6 in 10 voters felt negatively about the decision, with nearly 4 in 10 expressing anger. Democrats had a roughly 11-point edge over the GOP when it came to which party voters trusted more to handle issues related to abortion.

Interactive: Anatomy of a close election: How Americans voted in 2022 vs. 2018

And former President Donald Trump was on voters' minds nearly as much as the incumbent. Roughly 28% of voters said they intended their vote to express opposition to him, only a few points lower than the roughly one-third who said they were expressing opposition to Biden.

Neither party held an image advantage among voters. About 4 in 10 voters had a favorable view only of the Democratic Party, with roughly the same share having a favorable view of only the Republican Party, and about 11% viewing neither party favorably. Similar shares of voters thought either that only Democrats were too extreme (about 38%) or that only Republicans were (about 39%). About 13% called both parties too extreme and the remainder said that neither was. Voters also held net negative appraisals of both Democratic House Speaker Nancy Pelosi and House GOP leader Kevin McCarthy, although fewer offered an opinion of McCarthy.

There was a significant partisan divide in voters' priorities and attitudes this year. About 45% of voters who supported a GOP House candidate called inflation their top issue ?from a list of five, with 15% picking immigration and fewer than 15% picking any other issue as their priority. Among voters who backed a Democratic candidate, about 43% called abortion their top issue, with 18% picking inflation and fewer than 15% picking another issue.

Even on an individual level, many voters balanced multiple, and at times competing, priorities. Around 45% of voters said both that inflation had posed a hardship for their family and that they were dissatisfied or angry to see Roe v. Wade overturned. A tenth of voters trusted Democrats more to handle abortion, but Republicans more to handle inflation.

Specific issues weren't the only consideration, either. In exit polls across nine states with key Senate races, more than 70% of voters called party control of the Senate very important to their vote. Asked about the candidates' attributes that mattered most to them, voters in most of those states were closely divided on whether they prioritized picking a candidate who shared their values, or one who demonstrated honesty and integrity -- with fewer saying they were looking for candidates who cared about people like them, or who had the right experience.

The 2022 exit polls include interviews with thousands of voters, both those who cast a ballot on Election Day and those who voted early or absentee. That scope makes them a powerful tool for understanding the demographic profile and political views of voters in this year's election. And their findings will eventually be weighted against the ultimate benchmark: the results of the elections themselves. Even so, exit polls are still polls, with margins for error -- which means they're most useful when treated as estimates, rather than precise measurements. That's particularly true before the exit poll numbers are adjusted to match final election results.