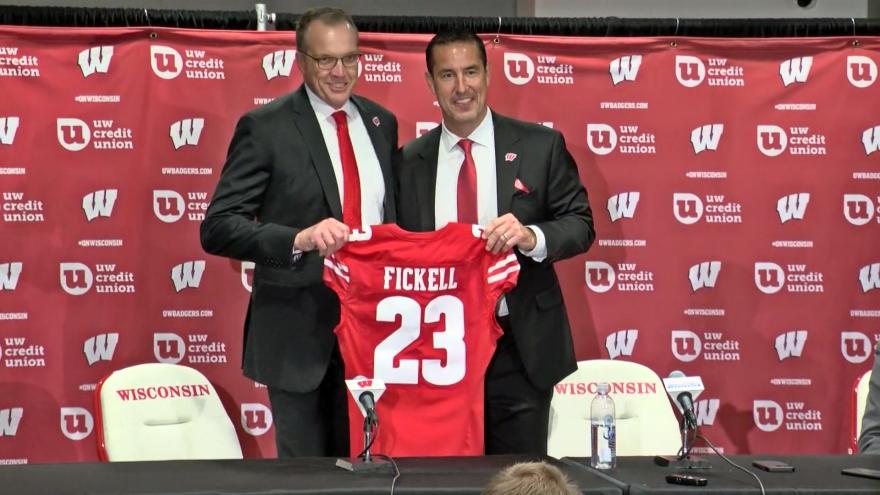 PHOENIX (AP) — The Luke Fickell era at Wisconsin will have a soft opening.

Fickell will be on the sideline against Oklahoma State on Tuesday night in the Guaranteed Rate Bowl. Most of the major decisions, like naming a starting quarterback, will be made by interim coach Jim Leonhard and the other current Badgers coaches.

"There's been a lot of things that these guys have gone through this entire season," Fickell said. "The last thing they need in this three-week period of preparing for a bowl game is to have more change. Me being there enough is probably change for them, so we tried to keep everything intact as much as they have done."

Wisconsin fired Paul Chryst in early October after a 2-3 start. The Badgers (6-6) became bowl eligible for the 21st straight season by beating Nebraska, then lured Fickell away from Cincinnati, where he led the Bearcats to the College Football Playoff last year.

While Fickell has been trying to fill out his coaching staff, the current coaches have been working the game plan — and dealing with various players who declared for the NFL draft or entered the transfer portal.

It'll also be Leonhard's final game with Wisconsin; the longtime defensive coordinator announced he won't be a part of Fickell's staff.

"It would be pretty arrogant of me to walk in here and think I could make a better decision in three weeks than what they have seen over a long period of time," Fickell said.

Oklahoma State (7-5) is looking to build some momentum for next season after fading down the stretch this year.

Oklahoma State climbed to No. 7 in the AP Top 25 after winning its first five games, then the Cowboys lost in double overtime to eventual CFP participant TCU and beat Texas before the season spiraled.

Oklahoma State lost four of its final five games to close out the season, including 48-0 to Kansas State. The Cowboys are in a bowl game for the 17th straight season.

"Well, the good news with young people nowadays, they are really resilient and so they've practiced really hard," Oklahoma State coach Mike Gundy said. "We've got a great culture at Oklahoma State. We've had it a long time."

Both teams will be replacing their starting quarterbacks from the regular season.

Wisconsin's Graham Mertz, the starter the past three seasons, entered the transfer portal and is headed to Florida. That leaves fifth-year senior Chase Wolf and freshman Myles Burkett, who had a combined six pass attempts this season.

Oklahoma State's Spencer Sanders also entered the transfer portal after four years as the starter. The offense will now be in the hands of Garret Rangel, a capable passer who doesn't have the same elusiveness as Sanders.

Rangel threw for 482 combined yards and two touchdowns in starts against Kansas and West Virginia this season.

"Spencer is a pretty electric guy on his feet, moving around," Gundy said. "Rangel moves around OK and can avoid the rush and make some plays with his feet, but certainly not like Spencer."

FOOTBALL IN A BASEBALL VENUE

The Guaranteed Rate Bowl moved to Chase Field in 2016 while Arizona State's Sun Devil Stadium was being renovated and hasn't left the home of the Arizona Diamondbacks since.

The Guaranteed Rate Bowl is one of four current bowl games played at a baseball stadium and has a unique look, with the end zone along the first base line and temporary stands in the outfield.

"I've seen the game. I've seen other bowls that have done that, so I'm looking forward to it," Gundy said. "I heard the players talking about they were excited about playing in a Major League Baseball stadium."