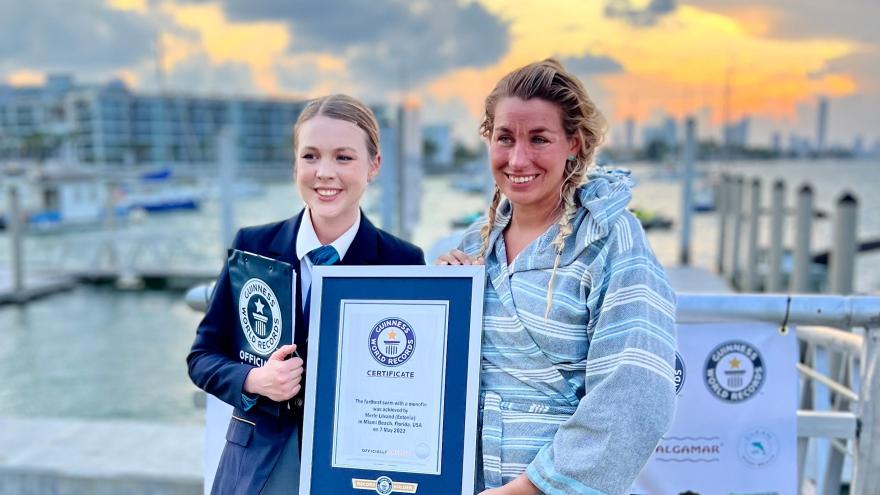 Liivand, also known as "Eco Mermaid," broke a Guinness World Record in May by completing a 26.22-mile swim using a silicone monofin.

The champion ice swimmer and marine conservationist accomplished the feat off the coast of Miami, Florida, in just 11 hours and 54 seconds, according to Guinness. She broke her previous record of 18.6 miles for the farthest swim with a monofin.

To set the record, Liivand could not use her arms. Instead, she only used her legs and feet, which were bound in the mermaid-like tail fin.

"Swimming with the monofin without using my arms is similar to how dolphins and marine animals swim," she told Guinness. "They have a fin and can't use any arms."

Along the way, she encountered loads of marine life and was even stung by a jellyfish.

"I got stung by jellyfish and kept telling myself that it was not the time to cry," she said.

The record wasn't just an athletic achievement, but an environmental one too.

Liivand uses her long-distance swims to raise awareness about environmental pollution, especially microplastics in the oceans.

"It's unfair that we have gotten to the point that fish, dolphins, and turtles are surrounded by plastic which ends up in their stomachs, and I feel that we as humans are next," she said.

During her swim, Liivand collected any garbage she saw and placed it in the kayak rowing alongside her to be properly disposed of later.

"When I see trash, I get angry," she said. "At the end of the day this isn't just about a record, it's about helping the community and the world."