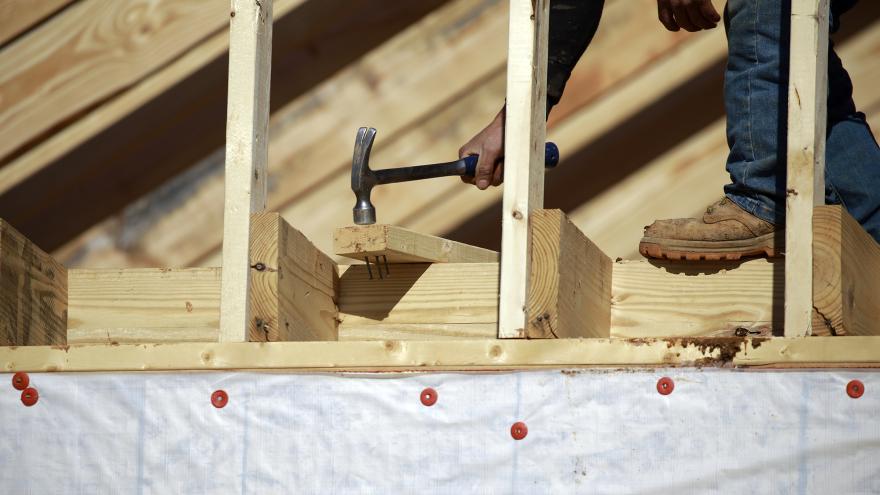 (CNN) -- Millions of Americans have been signing up for health insurance at their companies in recent weeks. But for some full-time workers, particularly in certain industries like construction, job-based coverage isn't an option for them.

This divide was even more evident as the job market roared back to life in 2021 after steep losses early in the Covid-19 pandemic.

Though the number of full-time, year-round workers ages 19 to 64 jumped by 10.4 million last year, the uninsured rate of this group also rose -- by 0.6 percentage points to 9.1%, according to Census Bureau data.

That's partly because the occupations that had the largest increases in the share of full-time, year-round workers last year were service and construction, which are less likely to provide job-based health benefits. Only about 62% of service workers and 56% of construction workers have employer-sponsored insurance.

At the same time, the share of employees in professional and management occupations -- which have the highest rates of workplace coverage at 89% and 85%, respectively -- declined somewhat last year. This also contributed to the drop in coverage among all full-time, year-round workers.

Overall, just over half of Americans have health benefits through their employer or their family member's job, according to the Census Bureau. Among workers ages 19 to 64, the share is 71%, though it varies by industry.

A larger share of full-time, year-round workers had public coverage, such as Medicaid, in 2021, though that still didn't fully offset the decline in private coverage, which includes work-based health benefits, the Census Bureau found.

More of these workers could participate in Medicaid last year because of a 2020 Congressional pandemic relief package that provides states with additional federal Medicaid funds but bars them from disenrolling beneficiaries, even if their incomes are too high to qualify typically. The number of enrollees has soared to 90 million as of July but is expected to drop by roughly 15 million once the federal government ends the public health emergency.

The boost in Medicaid enrollment helped reduce the nation's overall uninsured rate to 8.3% in 2021, among the lowest on record.

Although employer-sponsored coverage has generally been considered the gold standard, some of the shine has come off.

"There's been a quiet crisis in employer-sponsored insurance for quite some time now, particularly for lower-income workers and workers in certain industries," said Sabrina Corlette, co-director of the Center on Health Insurance Reforms at Georgetown University's McCourt School of Public Policy.

Fewer employers are offering coverage, and the policies they are providing are less robust, she said. This is particularly true among smaller companies that are not subject to the Affordable Care Act's mandate that requires larger employers to offer affordable coverage.

Only 32% of private-sector employers with fewer than 50 workers offered health insurance last year, according to federal data. That's down from a high of 47% in 2000.

Meanwhile, only 69% of eligible full-time workers at smaller companies that offer health benefits enrolled in the coverage last year. That compares with a high of nearly 84% in 1997, according to federal data.

Among larger private-sector employers, the offer rate has been in the mid-to-high 90% range since records began in 1996. But only 72% of eligible, full-time workers enrolled last year, compared with a high of 88% in 1998.

For some of these employees, even monthly premiums that are equal to 5% or 6% of their income may still be too expensive for them, Corlette said.

Many of those who have coverage through work still struggle to pay for medical care, a recent Commonwealth Fund survey found. Some 29% of those with job-based health benefits are considered underinsured because their out-of-pocket costs and deductibles are high relative to their income.

"That's a big concern -- that people are viewing their health plans as not enabling them to get the health care that they need," said Sara Collins, vice president for health care coverage and access at Commonwealth.