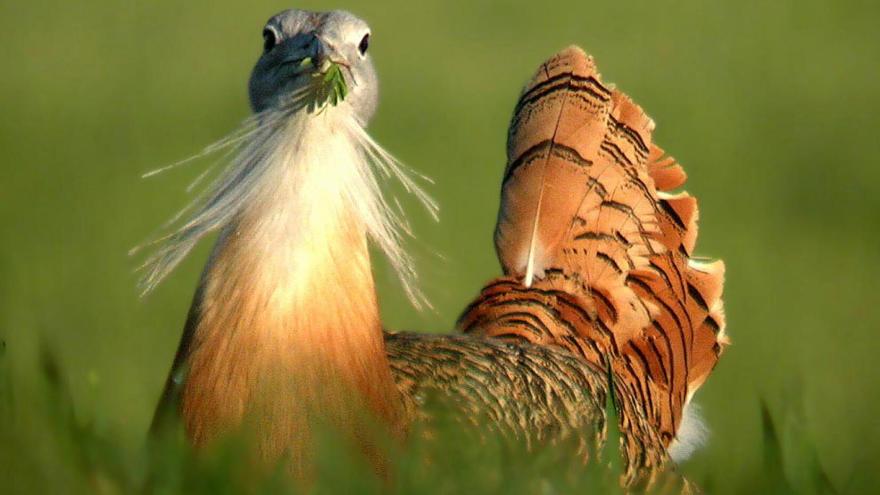 Being healthy is one of the ways a male great bustard can make himself appear attractive to win a female's attention.

(CNN) -- Taking drugs if you're feeling under the weather is old news for humans, but new research shows that the world's heaviest bird capable of flight could be the latest animal to use plants as a form of medication.

Researchers from Madrid in Spain studied data on 619 droppings belonging to great bustards and discovered that the two species of plants that were eaten more than other foods in their diet had "antiparasitic effects."

Found in parts of Europe, Africa and Asia, great bustards are listed as vulnerable on the International Union for Conservation of Nature's Red List of Threatened Species, with around 70% of the world's population living in the Iberian peninsula, according to the release.

Published in Frontiers in Ecology and Evolution scientific journal on Wednesday, the study reveals that the great bustards ate an abundance of corn poppies (Papaver rhoeas) and purple viper's bugloss (Echium plantagineum). In humans, corn poppies have been used for their medicinal properties as a sedative and pain relief while purple viper's bugloss can be toxic if consumed.

Through analysis of the plants extracts, researchers discovered that both have antiparasitic properties, which they tested against three common parasites in birds: the protozoon Trichomonas gallinae, the nematode Meloidogyne javanica and the fungus Aspergillus niger.

Both plants were highly effective in killing or inhibiting the effects of the protozoa and nematodes, according to the study. The purple viper's bugloss showed moderate defensive action against the fungi.

The researchers noted that these plants were consumed especially during mating season, which they believe was to negate the effects of increased exposure to parasites during that time.

Great bustards are known as lek breeders, which means males gather at chosen sites to put on displays for the visiting females, who then choose a mate based on the show, the news release said.

"In theory, both sexes of great bustards might benefit from seeking out medicinal plants in the mating season when sexually transmitted diseases are common -- while males that use plants with compounds active against diseases might appear more healthy, vigorous, and attractive to females," Azucena Gonzalez-Coloma, a researcher at the Institute of Agricultural Sciences in Madrid and study co-author, said in the release.

Paul Rose, a zoologist and lecturer in animal behavior at the University of Exeter in England, said the findings show that great bustards are capable of determining what is good for them at a certain time and change their foraging behavior accordingly. He was not involved with the study.

"We normally associate self-medication in species like primates, so to see researchers studying endangered birds is brilliant," Rose told CNN.

Chimpanzees have been spotted capturing insects and applying them to their own wounds, as well as the wounds of others, possibly as a form of medication, while dolphins rub against certain kinds of corals to protect their skin from infection.