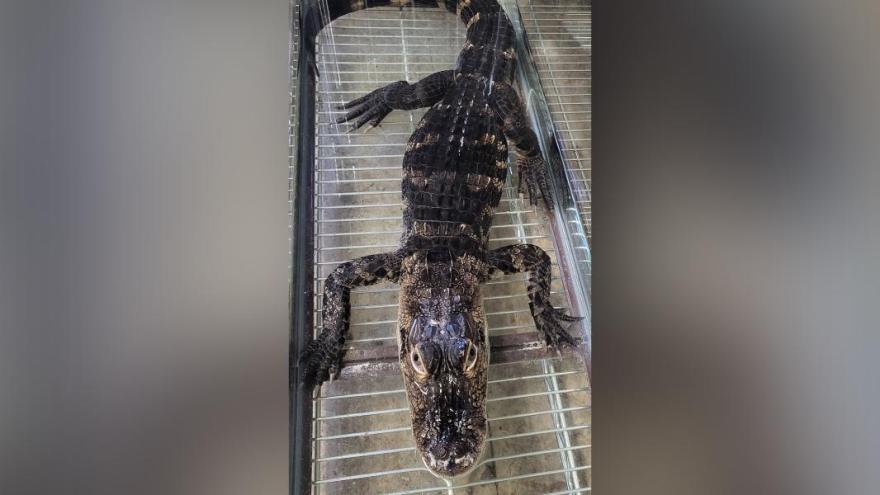 (CNN) -- A young alligator found in a plastic container in New Jersey has been relocated to another zoo in the state until it is transferred to an alligator sanctuary in Florida.

The 3-foot long gator was found in a plastic container in an empty lot in Neptune, according to a Facebook post from the Monmouth County SPCA. The large reptiles, found in the wild in the Southeastern US, are illegal to keep as pets in New Jersey.

A "good Samaritan" called in the wayward creature to the Monmouth County SPCA, according to the Facebook post. The shelter's animal control unit brought the gator back to the shelter, where it was housed in a clean, climate-controlled tank.

"It is illegal for New Jersey residents to keep alligators or caimans, which are considered potentially dangerous exotic species," said Monmouth County SPCA Executive Director Ross Licitra in the post. "Not only is it a danger to the public, but these animals, when kept in captivity, need very specific care that only professionals can provide."

"Out of concern that these wonderful animals might end up being abandoned or euthanized, the zoo started a program years ago to transport any alligators I receive calls about to Croc Encounters, a sanctuary in Tampa," Kevin Wilson, supervising animal keeper for the reptile house at the Cape May County Park and Zoo, said in an email to CNN. "The alligator will be housed here in a quarantine situation and cared for until such time that I can get them to Croc Encounters."

"The little one appears to be in good health and I'm sure will enjoy the time here before heading to a comfortable, more natural environment," he added.

The alleged owner of the alligator has been charged with keeping a prohibited and dangerous exotic species, according to the Monmouth County SPCA.