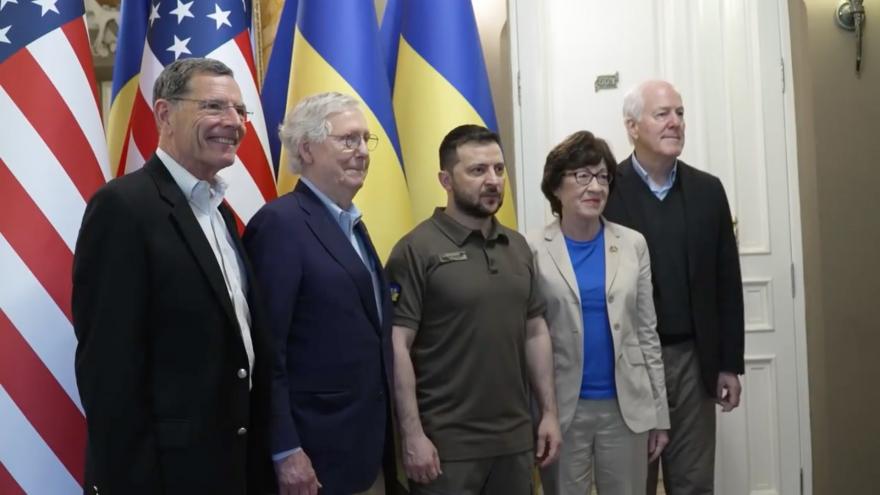 (CNN) -- Ukrainian President Volodymyr Zelensky met with a congressional delegation led by Senate Minority Leader Mitch McConnell in Kyiv Saturday, and called for Russia to officially be recognized as a "terrorist state," he said Saturday in his nightly address.

McConnell said in a statement Saturday evening the delegation "just left" Ukraine and called it an "honor" to meet with Zelensky and his senior advisers. McConnell was joined on the unannounced trip by Republican Sens. Susan Collins of Maine, John Barrasso of Wyoming and John Cornyn of Texas.

McConnell and the other senators became the latest US officials to visit Ukraine since Russia invaded the eastern European nation in late February.

The Kentucky Republican said in the statement the delegation "reaffirmed" to Zelensky "that the United States stands squarely behind Ukraine and will sustain our support until Ukraine wins this war. It is also essential that America not stand alone."

He continued: "It is squarely in our national interest to help Ukraine achieve victory in this war and to help Ukraine and other countries deter other wars of aggression before they start."

In his nightly address Saturday,Zelensky said he discussed US support for Ukraine and tightening sanctions on Russia with the delegation.

"I believe that this visit once again demonstrates the strength of bipartisan support for our state, the strength of ties between the Ukrainian and American nations," Zelensky said.

The Ukrainian president added that he "expressed gratitude for the historic decision to renew the Lend Lease program" during the GOP delegation's visit.

Biden earlier this week signed into law the Ukraine Democracy Defense Lend-Lease Act. The new law, which eases some of the requirements for the US to lend or lease military equipment to Ukraine, passed with a bipartisan majority in the US House and Senate. Its sponsors said the legislation gives Biden much broader authority to help Ukraine defend itself against Russia and addresses how the US can get weapons to Ukraine faster.

Zelensky said earlier Saturday on his Instagram account the GOP delegation visit was "a strong signal of bipartisan support for Ukraine from the United States Congress and the American people."

He added on Instagram: "Thank you for your leadership in helping us in our struggle not only for our country, but also for democratic values and freedoms. We really appreciate it."

Congress has been in the process of trying to pass a roughly $40 billion aid bill which would provide Ukraine with military and humanitarian assistance. In a rare show of unity, McConnell and Senate Majority Leader Chuck Schumer pushed for swift passage of the bill this week, after the House had advanced the measure in a bipartisan vote. The Senate effort, however, was blocked Thursday by GOP Sen. Rand Paul of Kentucky who has demanded changes to the legislation. The Senate is now expected to pass the bill sometime next week, with Schumer forced to take procedural steps to overcome Paul's objection, before sending it to President Joe Biden's desk.

A statement posted on Zelensky's official website following the meeting with the GOP senators noted the Ukrainian leader "expressed hope that the US Senate will promptly approve a package of additional funding to support the Ukrainian people."