SHOREWOOD, Wis. (CBS 58) -- People in the Milwaukee area with ties to Ukraine and Russia are watching the ongoing European conflict with concern and broken hearts. But they are also coming together in support of peace and each other.

European Food & Gifts, formerly known as Russian Food & Gifts, is owned by Ukraine native Nikolay Rogovskiy. He has been watching the developments in his home country every day.

"My heart is broken for my Ukraine, for my people," Rogovskiy told CBS 58. "It's just horrible to see what's happening there."

The sentiment is shared by his customers, including Yelena Brezdina. She was born in Russia but moved to Kiev after college with her husband before coming to the Milwaukee area where she has lived for 30 years.

"We support so much Ukraine, our heart is absolutely broken," Brezdina said. "I'm talking every single day with my friends in Kiev who's suffering."

On Thursday, Rogovskiy received a bouquet of blue and yellow flowers, the colors of the Ukrainian flag.

"It was a gift from dear customers of mine as a show of appreciation and support to what's happening with my country," Rogovskiy said.

The flowers, featuring yellow roses and blue carnations, are now displayed prominently in the storefront window next to a Ukrainian flag. The bouquet, Rogovskiy said, has an impact beyond his shop.

"I felt very good about it," Rogovskiy said. "I felt support and when I shared this bouquet on my page, people were thanking me from Ukraine, they felt that support and they were saying that it gives them strength to go through all of this." 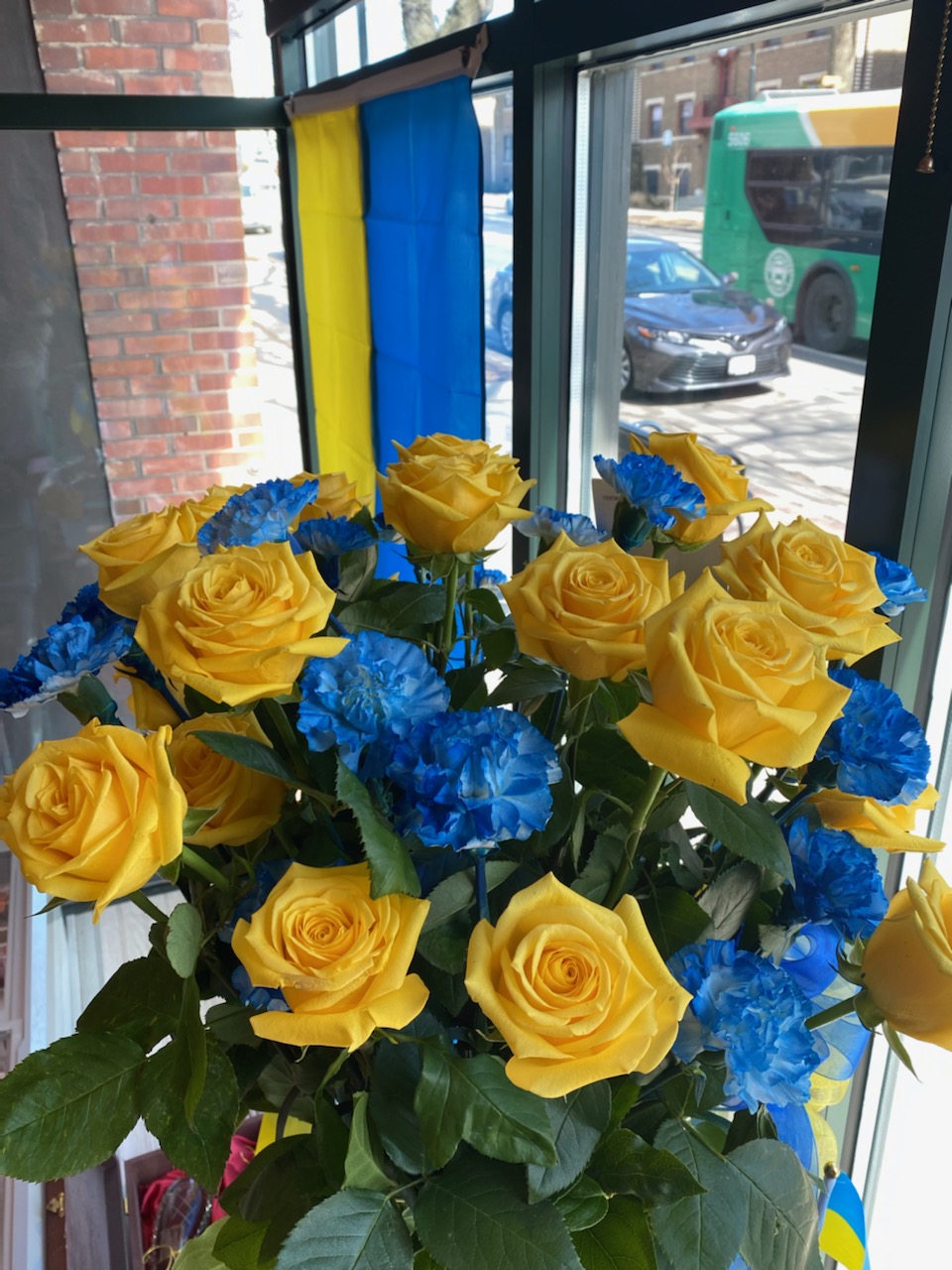 The customer who shared the flowers was Luba, a designer at Welke's Milwaukee Florist.

Welke's owner told CBS 58 Luba has family in St. Petersburg and a sister in Kiev.

"[She] has not been able to reach her [sister] until just recently," Welke's owner David Lang said.

"It's just scary not being able to help or be there for her and her family," Lang said. "This is just one way that we could help support her as well as the people in Ukraine."

The staff at Welke's said flowers are shared for all types of occasions and can have a deep, emotional impact. For them, this particular arrangement was special for how it affected people who see it displayed at European Food & Gifts.

"To know that it's touching so many people daily, too, it means a lot," Stacey Swiger, a design manager at Welke's, said.

As war rages on thousands of miles away, this community in the Milwaukee area is coming closer in hopes for an end to the conflict.

"We pray that peace will prevail," Lang said.

"Glory to Ukraine," Rogovskiy said. "Slava heroiam," he added, which means "glory to the heroes."