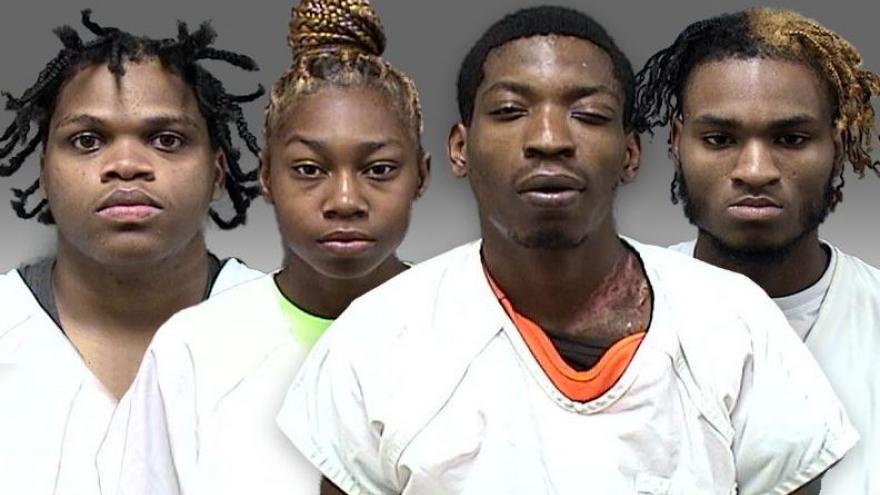 RACINE, Wis. (CBS 58) -- Four people were arrested Monday, after allegedly kidnapping a Racine bank employee and her two children from their Kenosha apartment on June 28.

19-year-old William Howell, 19-year-old George Pearson-Robb, and 23-year-old Donterious Robb face charges of armed robbery, robbery of a financial institution, arson of property - party to a crime, and three counts of kidnapping, according to court records.

18-year-old Lamarra Powell is charged as a party to a crime in robbery of a financial institution and in three counts of kidnapping.

According to a criminal complaint, a 25-year-old branch manager at Wells Fargo on Martin Luther King Dr. and High St. in Racine, finished her shift and drove to Kenosha to pick up her children on June 28. She then drove to her apartment, also located in Kenosha.

As the woman began taking her children out of the car, she was approached by two unknown, armed men. A suspect later identified as 23-year-old Donterious Robb, allegedly pointed a gun at her and forced her and her two daughters, ages two and five, into the back of the vehicle.

One of the men reportedly took her wallet and cell phone and demanded the password to the phone.

According to the victim, the men drove her car to an unknown location in Milwaukee. They then confined the woman and her children in a basement and discussed a bank robbery they had planned for the next day.

The men gave the woman and children a bucket to use as a toilet, and two McDonald's Happy Meals, according to the complaint.

A masked woman, later identified as 18-year-old Lamarra Powell, came into the basement at one point, but stayed in the shadows, according to the victim.

According to the complaint, the suspects told the victim that they needed her to gain entry into the bank's vault, and demanded her debit card's PIN number, which she provided. One of the suspects later left and withdrew $303 from the woman's account.

Around 5 a.m. on June 29, an article of clothing was placed over the victim's head, covering her eyes, and she and her children were taken back into her vehicle and driven toward Racine. The victim said there was a third unknown man in the car.

Once they arrived, the suspects removed the clothing from the woman's head and demanded she let them into the bank.

The men ordered her to disable the alarm at gun point before they began emptying teller drawers into bank bags.

After allegedly emptying five drawers, they fled the scene. The victim then ran to a person at the ATM outside, who contacted police.

Around 7:20 a.m., officers responded to reports of a vehicle fire near Clarke and Buffum St. in Milwaukee. Police located the victim's car on fire. The vehicle was destroyed, and the garage it was parked next to was damaged.

Officers executed a search warrant at the suspects' homes on July 8, and located the victim's driver's license, several firearms, and $3,900 in cash in one residence.

Receipts and men's clothing totaling $2,360 were found in another home, reportedly purchased three hours after the robbery.

The suspects were booked into the Racine County Jail.