Common Council President Cavalier Johnson said they've caused the same problems that once plagued the Midtown Center and can be solved.

"For the second weekend in a row, Water Street has been out of control," the statement, signed by Milwaukee Police Association President Dale Bormann, Jr., said. "There have been fights, there have been shootings, there have been people out there who just don't care about others. The businesses are not getting what they deserve. And that needs to stop NOW! It's time for the City and the Department to stand up to those who are causing destruction in this city. It's time for the City to hire more officers to combat these issues on Water Street and everywhere in the City."

"We've had a lot of success shutting down that activity at Midtown and now they've migrated down here," said Common Council President Cavalier Johnson.

Midtown's violence peaked in early May with a barrage of gunfire. Three-hundred rounds were shot during a large gathering, injuring two people. In response, the city put up more solid barriers to keep people out. Johnson said it worked and is a solution the city needs to consider on Water Street. He said the state will not provide more money to hire more officers.

"Unless they give us the shared revenue that they have not been giving us for the past nearly 20 years, we're going to continue to be in a position where it's difficult to maintain police levels of strength," said Johnson.

It said 68 officers will have retired by the end of this year. The city cut 120 positions out of the budget.

Milwaukee Police Association also said crime in the city is on the rise, stating as of Tuesday, crime in the city is up 45%. The police union also said the crime number is above the historical homicide rate of 2020. Milwaukee Police Association said homicides are up 1%, rapes are up 24%, robberies up 21%, thefts up 42%, and motor vehicle thefts are up 194%.

Union President Dale Bormann Jr. wrote: "It's time for the city to hire more officers to combat these issues on Water Street and everywhere in the city."

"We are utilizing resources in the best way, in the most effective and efficient manner for the safety of our city," said Norman.

He said police will continue to be visible on Water Street.

"There is a lot of different areas that we have to be patrolling and a lot of times it's trying to be in the right place at the right moment," said Norman.

Police issued 70 citations and towed 42 cars over the weekend.

More officers and units will be patrolling the Deer District during the playoffs.

The full statement can be read below: 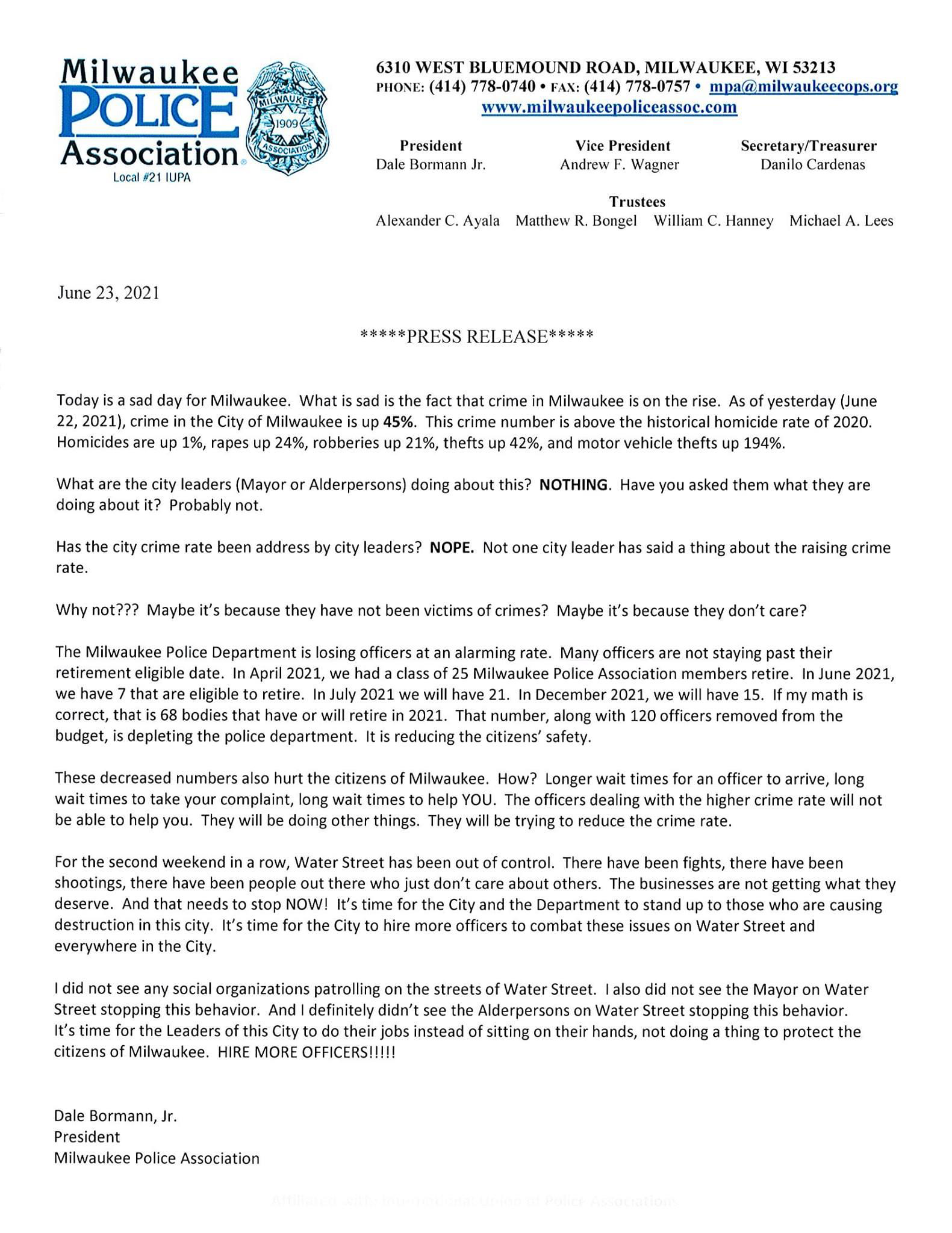