Moderate snow showers continue to track east towards the lakeshore counties, but some sun is mixing in with the smaller and lighter snow showers to the west which has allowed temps to rise into the low 40s. 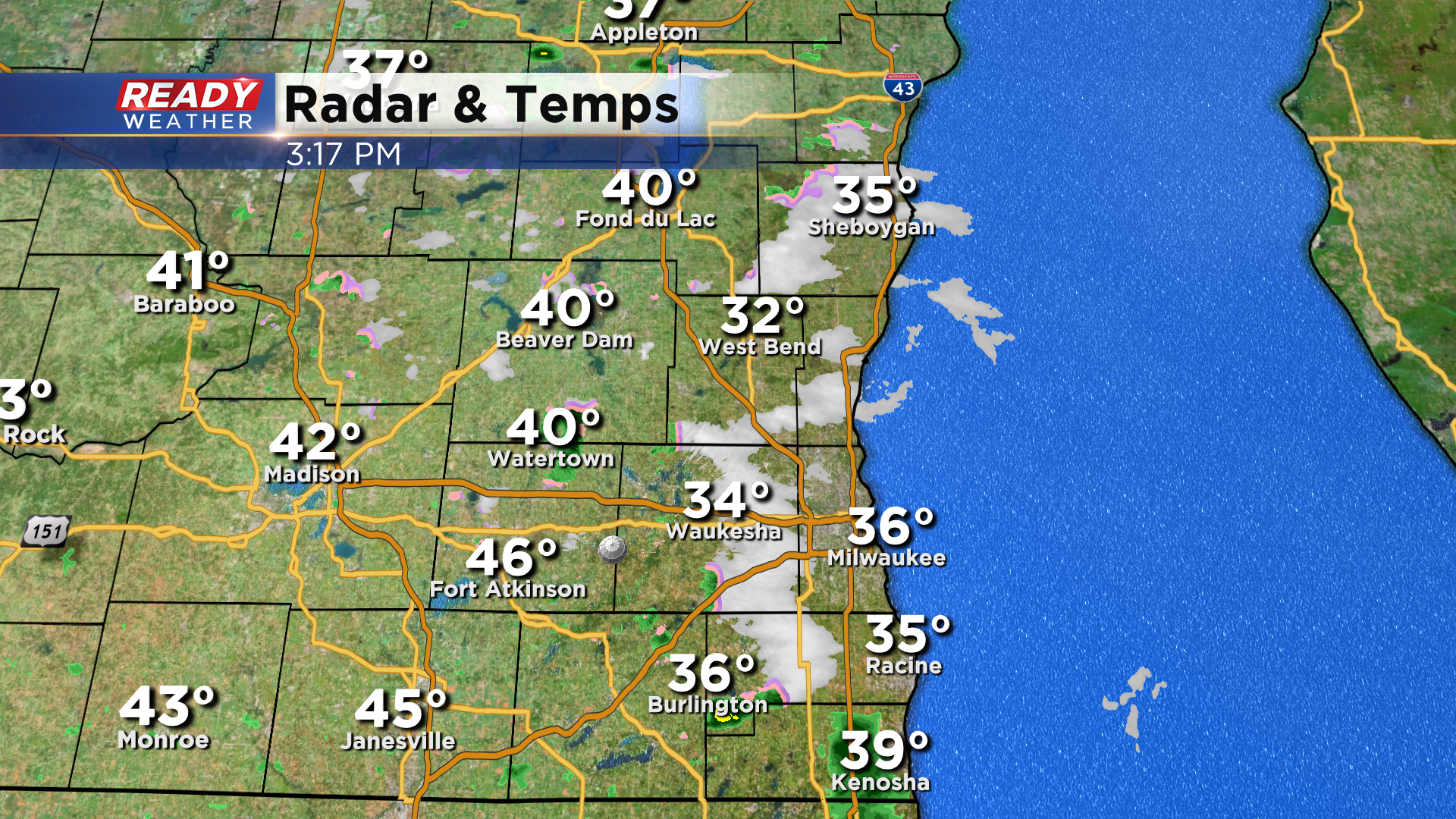 Warmer pavement temperatures are preventing the snow from accumulating on roads, unlike earlier today. Snow showers will taper off around/after sunset. 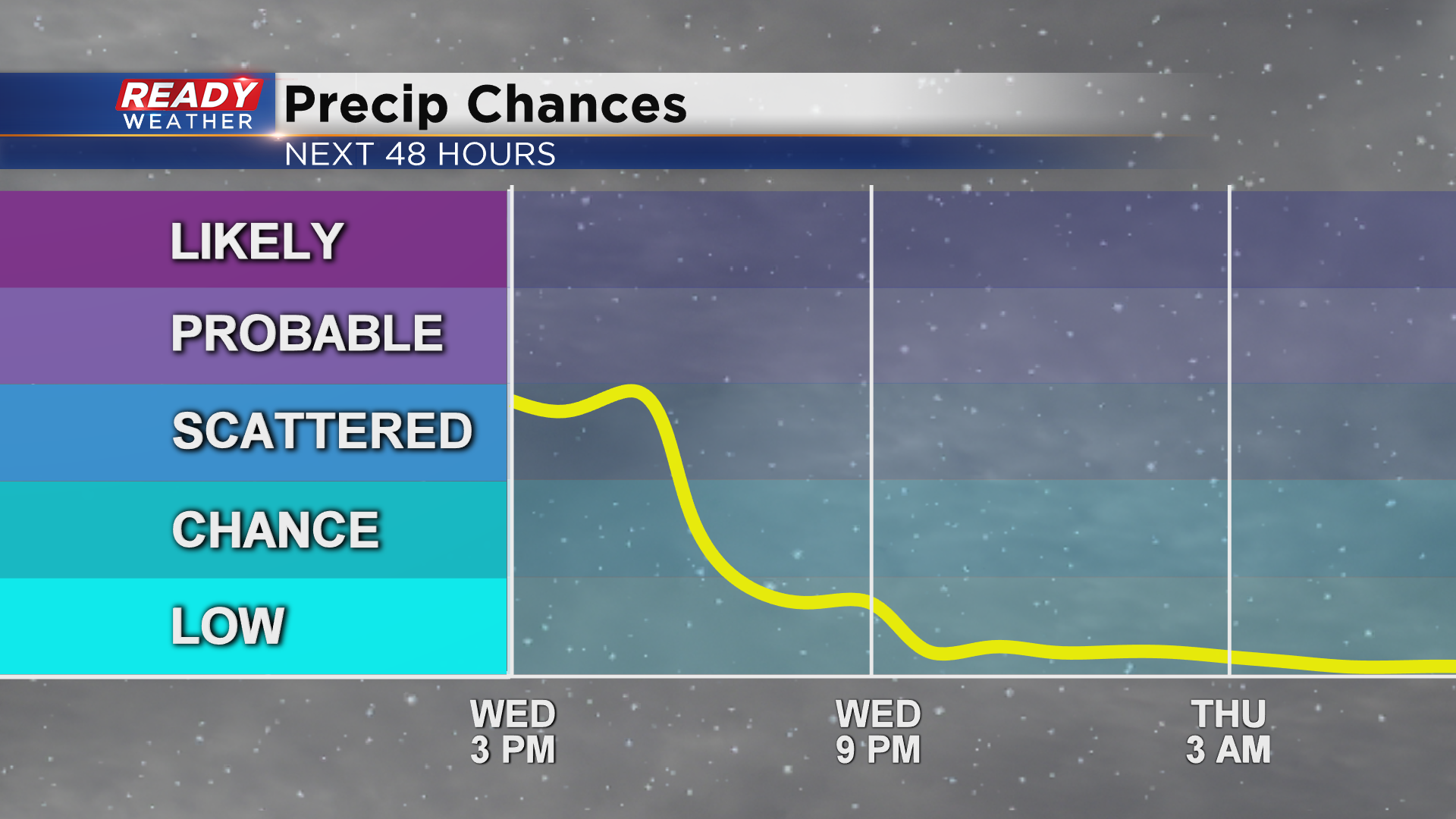 Moderate to heavy snow squalls, mixed with graupel (snow pellets) continue to impact southeast Wisconsin and will do so into the early evening. 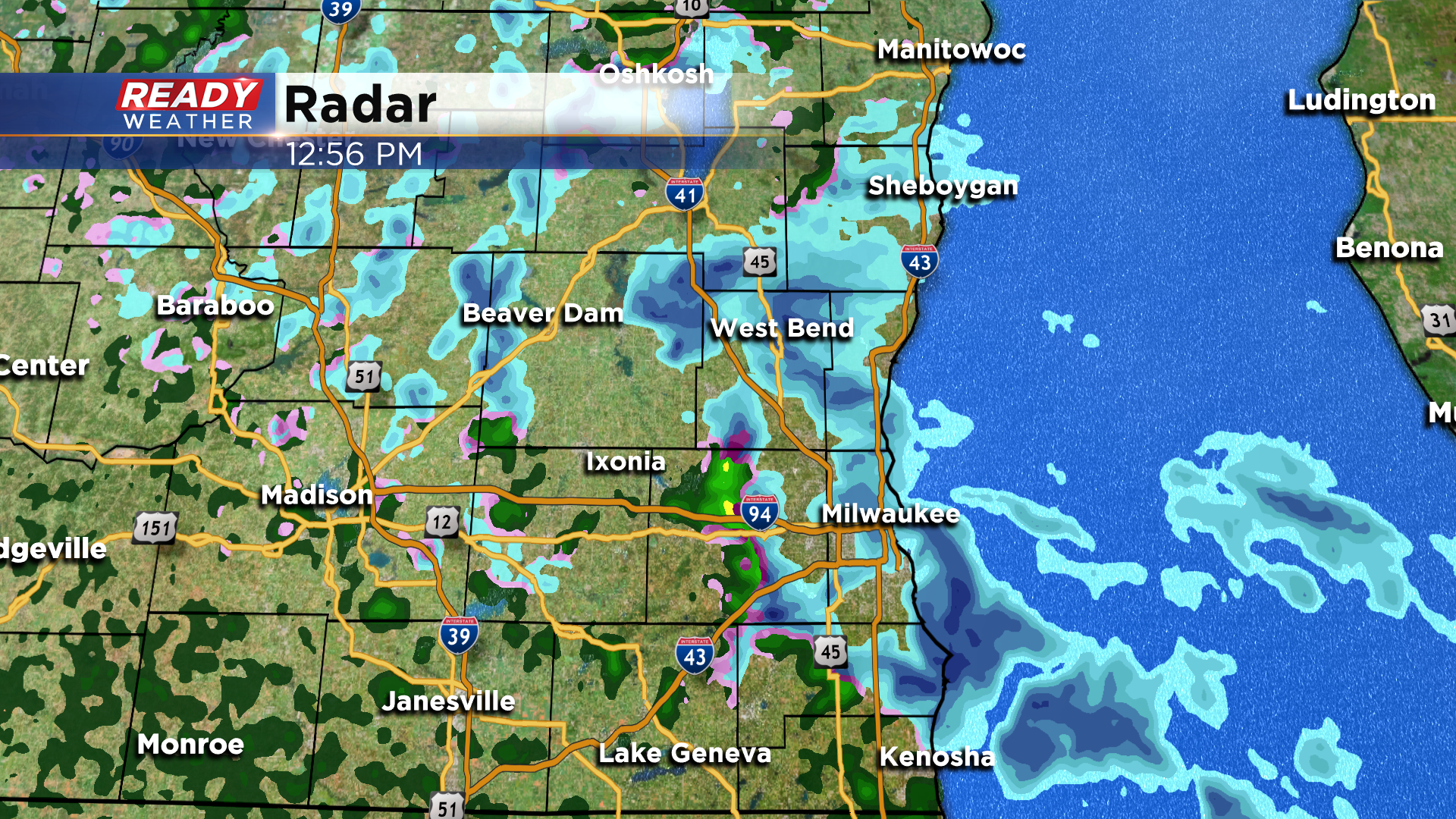 Visibility has been going from perfectly fine down to nothing in these heavy bursts of snow. Keep this in mind while traveling this afternoon. 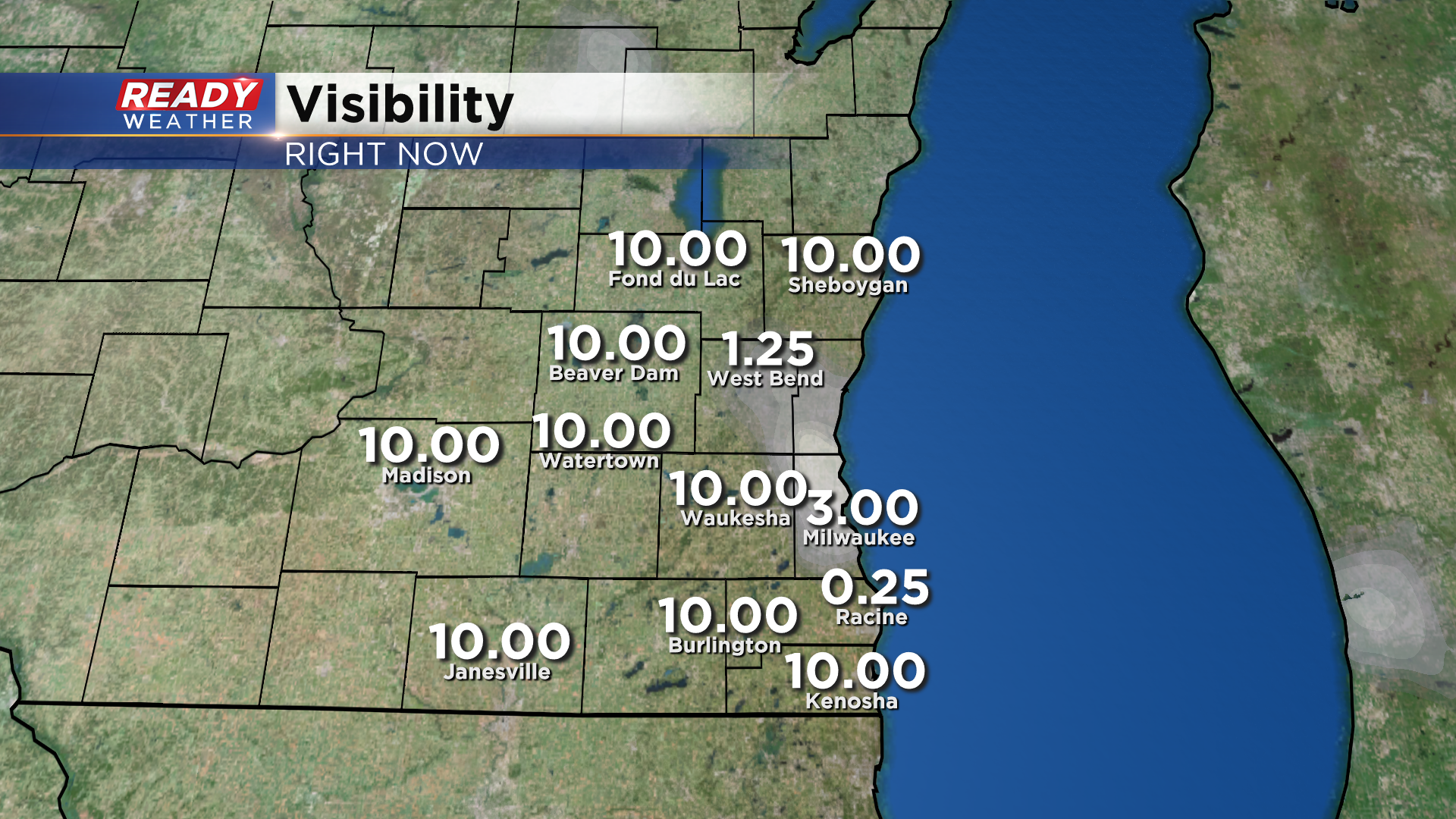 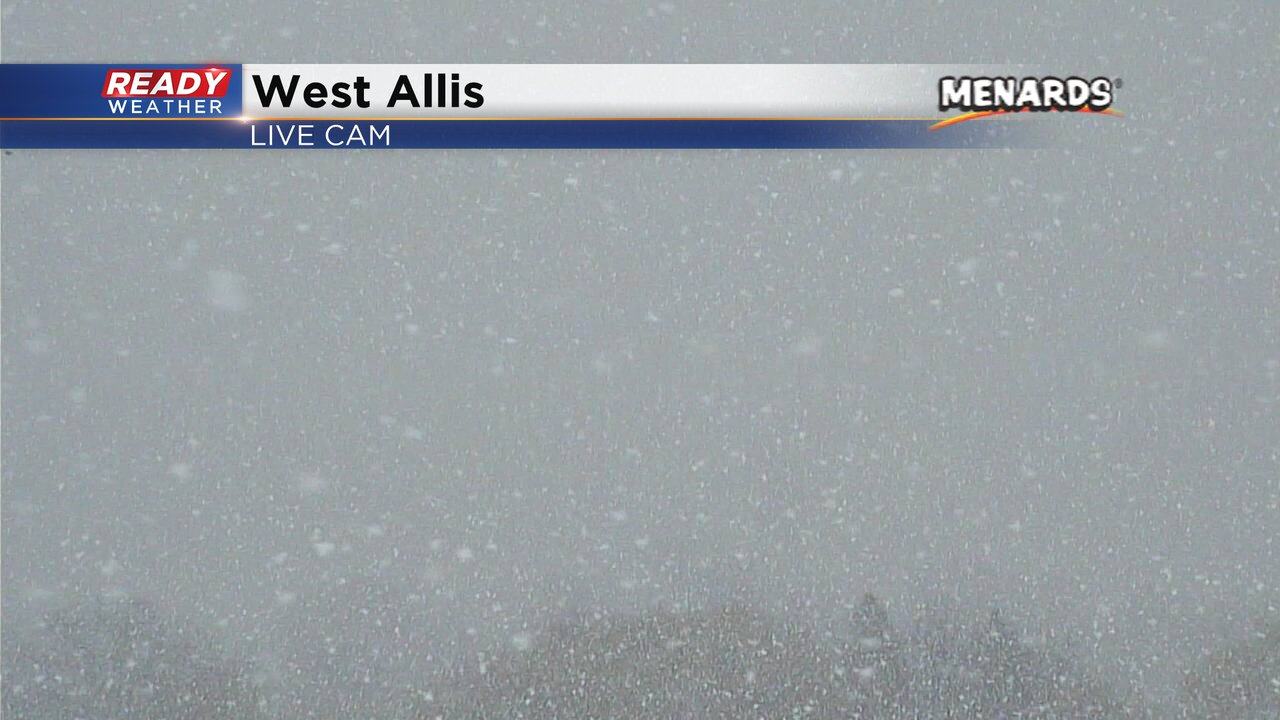 As of 1pm, travel is NOT ADVISED on roads shaded in purple due to heavy snow and roads not being treated. This includes I-94 from Racine into the MKE Metro, 794, 894 between the Hale and the Zoo, and 41/45 throughout Washington county. 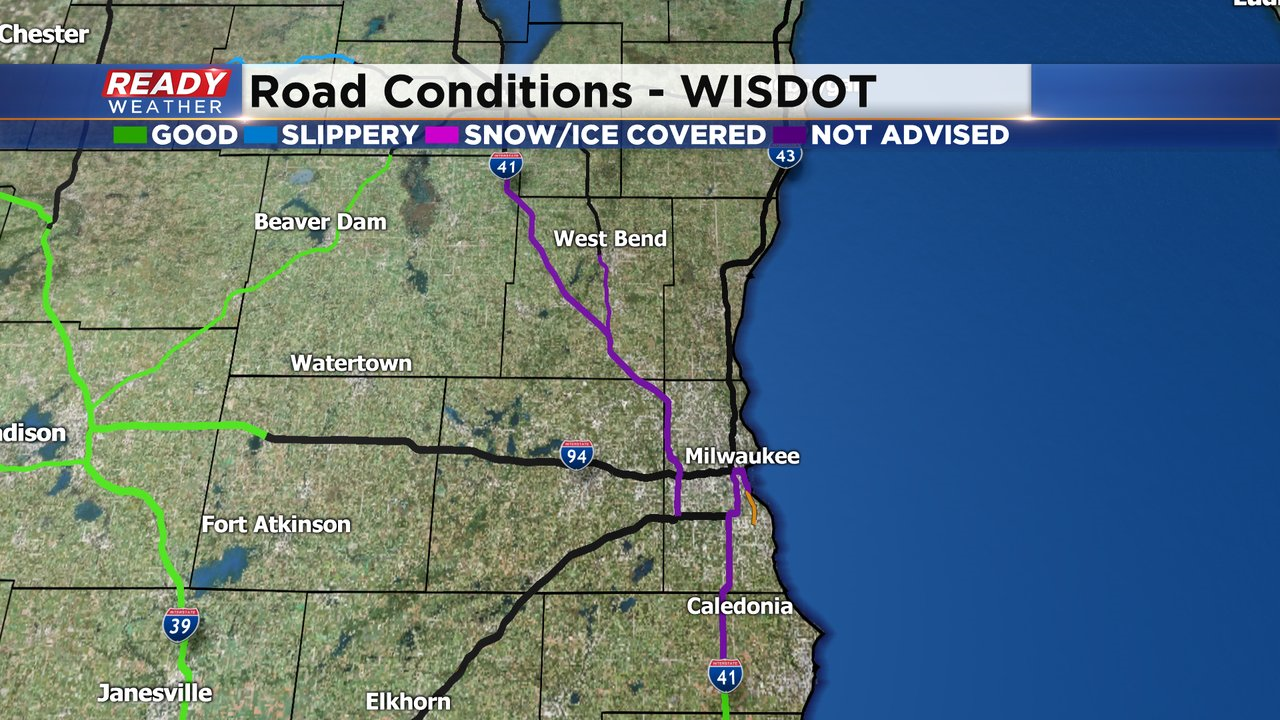 There have been several accidents in Washington county, including one involving 9 vehicles near Slinger. Plan on reduced visibility at times during the PM commute, and remember to turn on your headlights!

It's happening! Quick bursts of snow continue this morning and into this afternoon. Check out some of the snow reports from earlier this today across Sheboygan county: 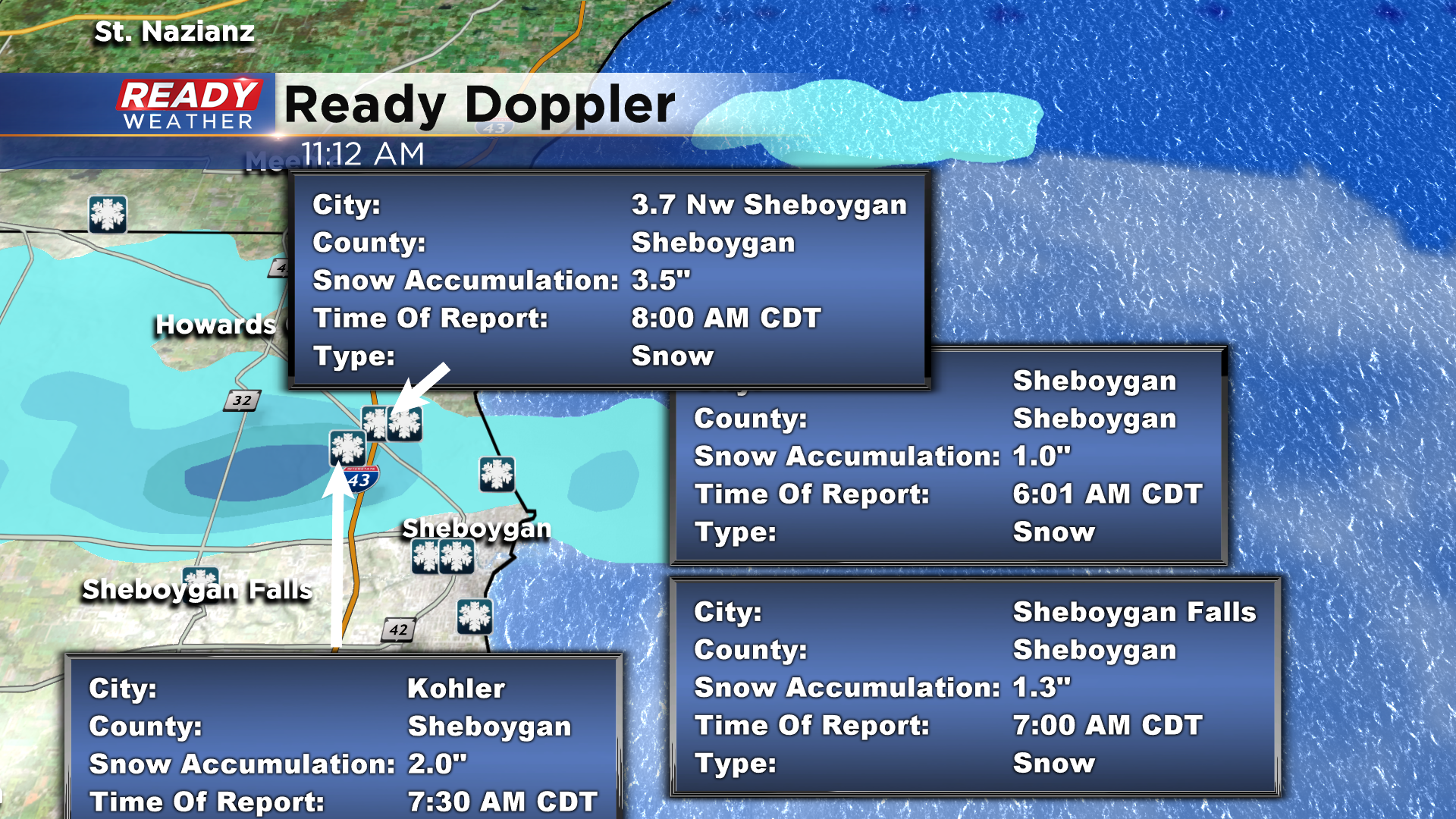 Thankfully, we're so late in the season most of this is just accumulating on grassy surfaces. But don't rule out an isolated slick spot or two on roads through this afternoon. Additionally, the nature of these snow showers may reduce visibility. We'll continue to see snow showers develop and drift southeast for the rest of the daylight period, but mainly concentrated through mid afternoon. 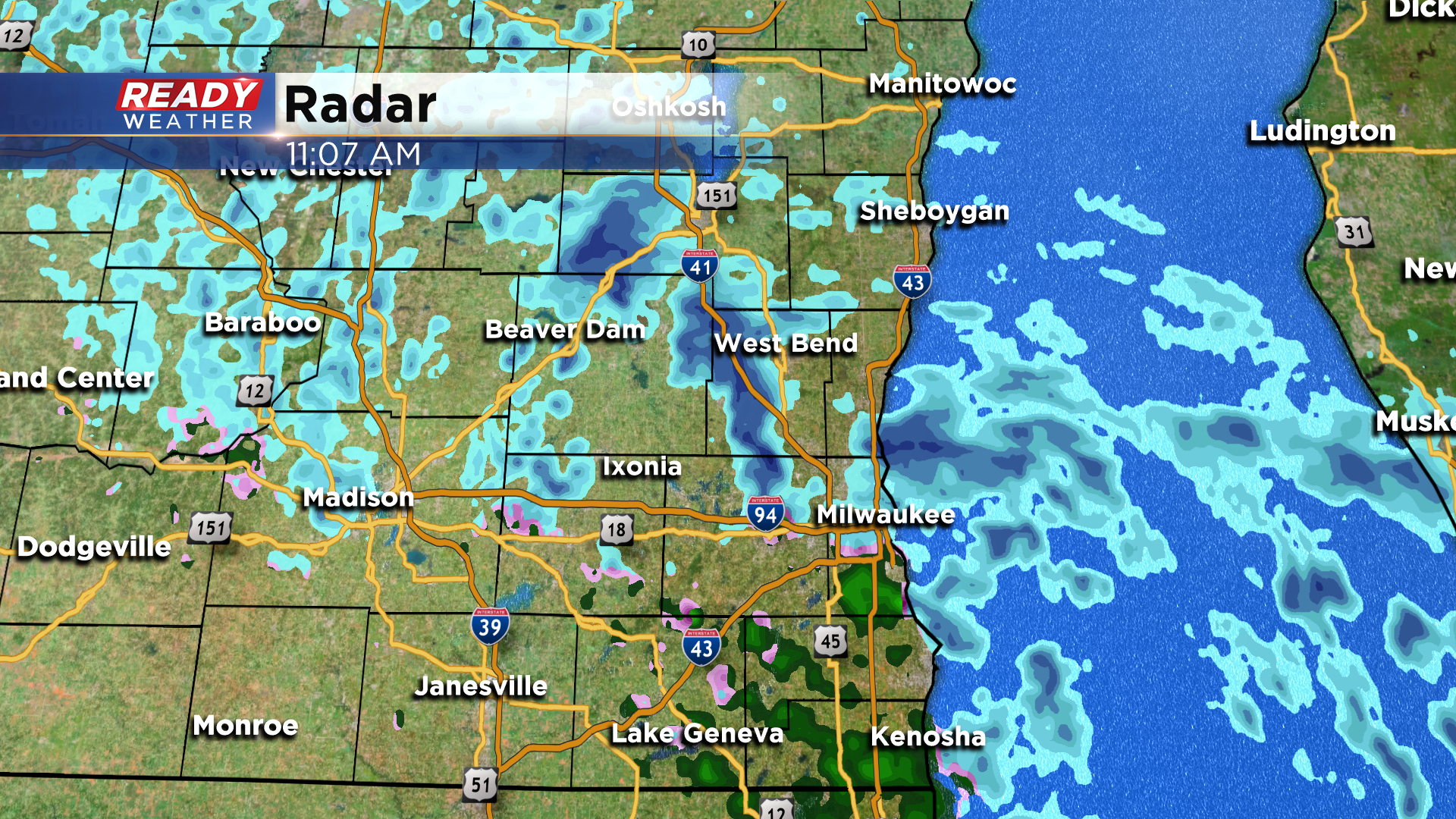 As you can see, the transition from snow to rain is also possible, like what you're seeing here on Ready Doppler for our southern locations, just after eleven this morning. Here's what to expect for the remainder of Wednesday. 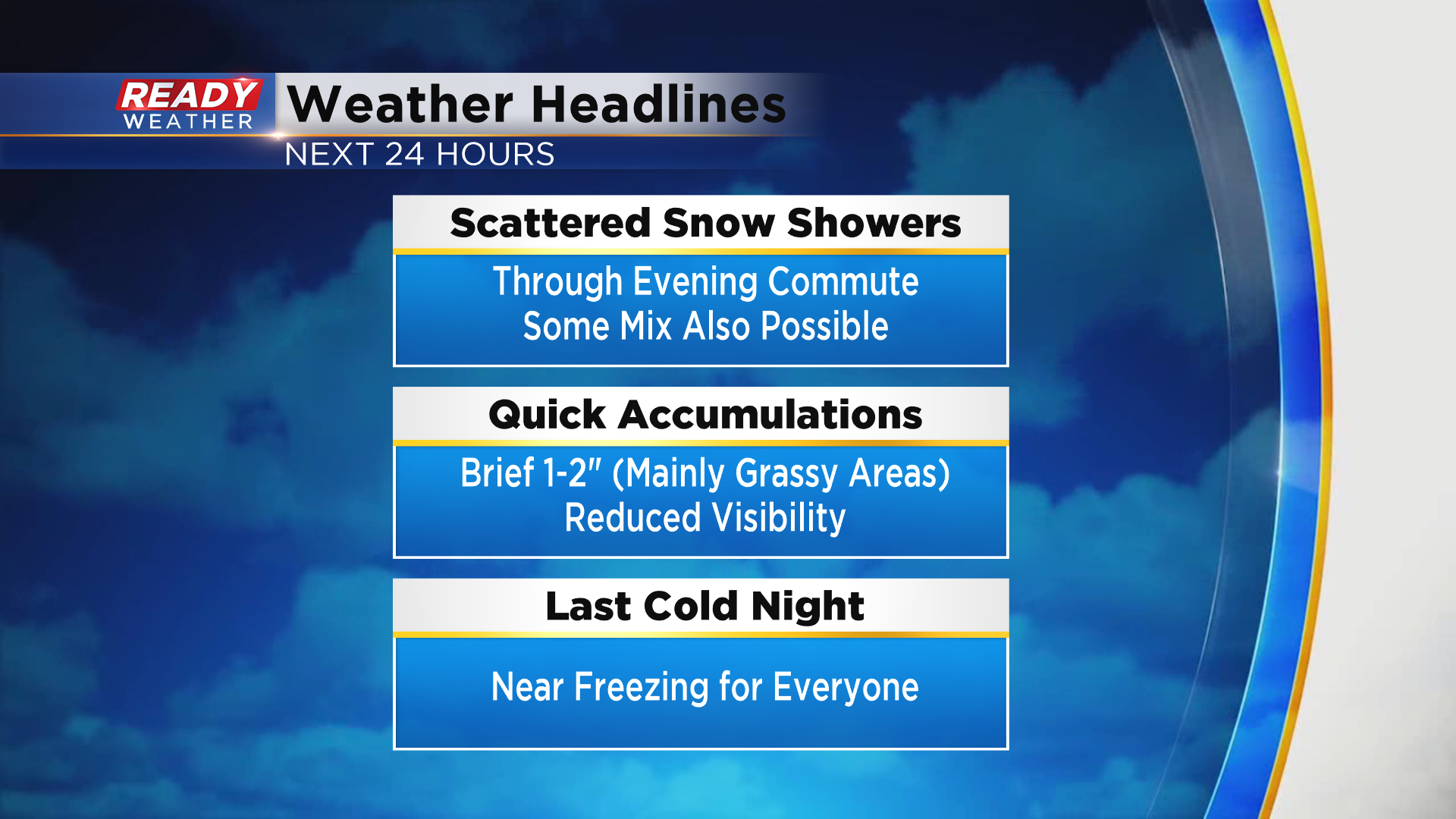 We've received just a trace of snow so far this month in Milwaukee, and believe it or not, two inches is normal for the month. With that said, this is likely the last snow for the season! By early next week we'll be talking 60s and 70s!

Light to moderate scattered snow showers continue to move through southeast Wisconsin Wednesday morning and the chance for accumulating snow is increasing. Sheboygan has already reported a couple inches of snow on patio furniture and other cold surfaces but even with that inch or two the roads just stayed wet. The likelihood of a couple inches of snow for most of southeast Wisconsin, especially east of a line from Fond du Lac to Burlington, is increasing. 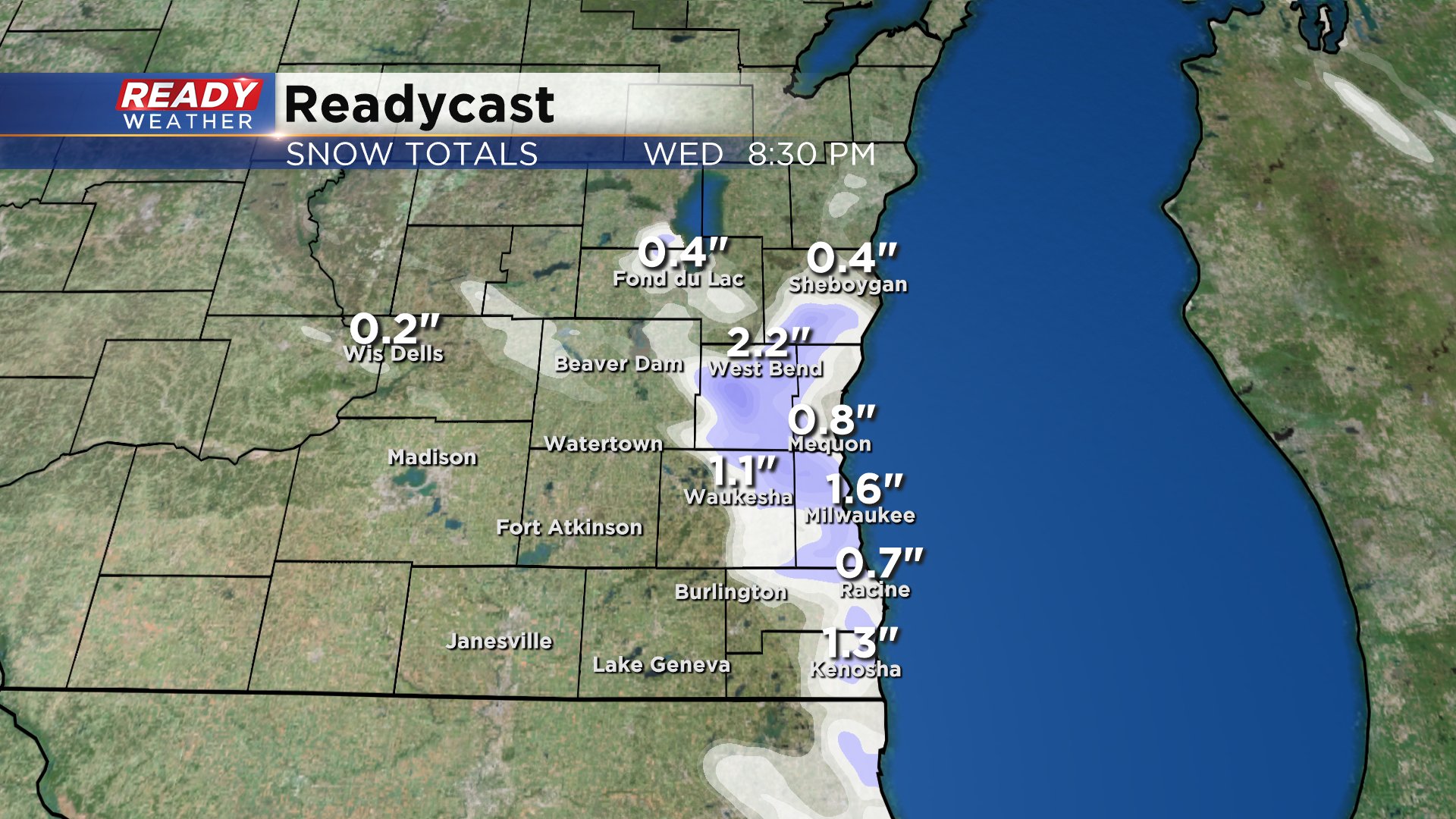 Travel should remain ok with only wet roads to contend with. The edges of the roads might get a little slushy and some low visibility is to be expected.

April snow showers bring May flowers? We had some flurries and scattered snow showers Tuesday afternoon but it didn't really stick anywhere. Wednesday is a different story. We've already seen reports of snow sticking with a few snow showers in Sheboygan County where someone has already measured an inch of snow on their patio. Here was a DOT image from I-43 in Sheboygan just after 6 a.m. 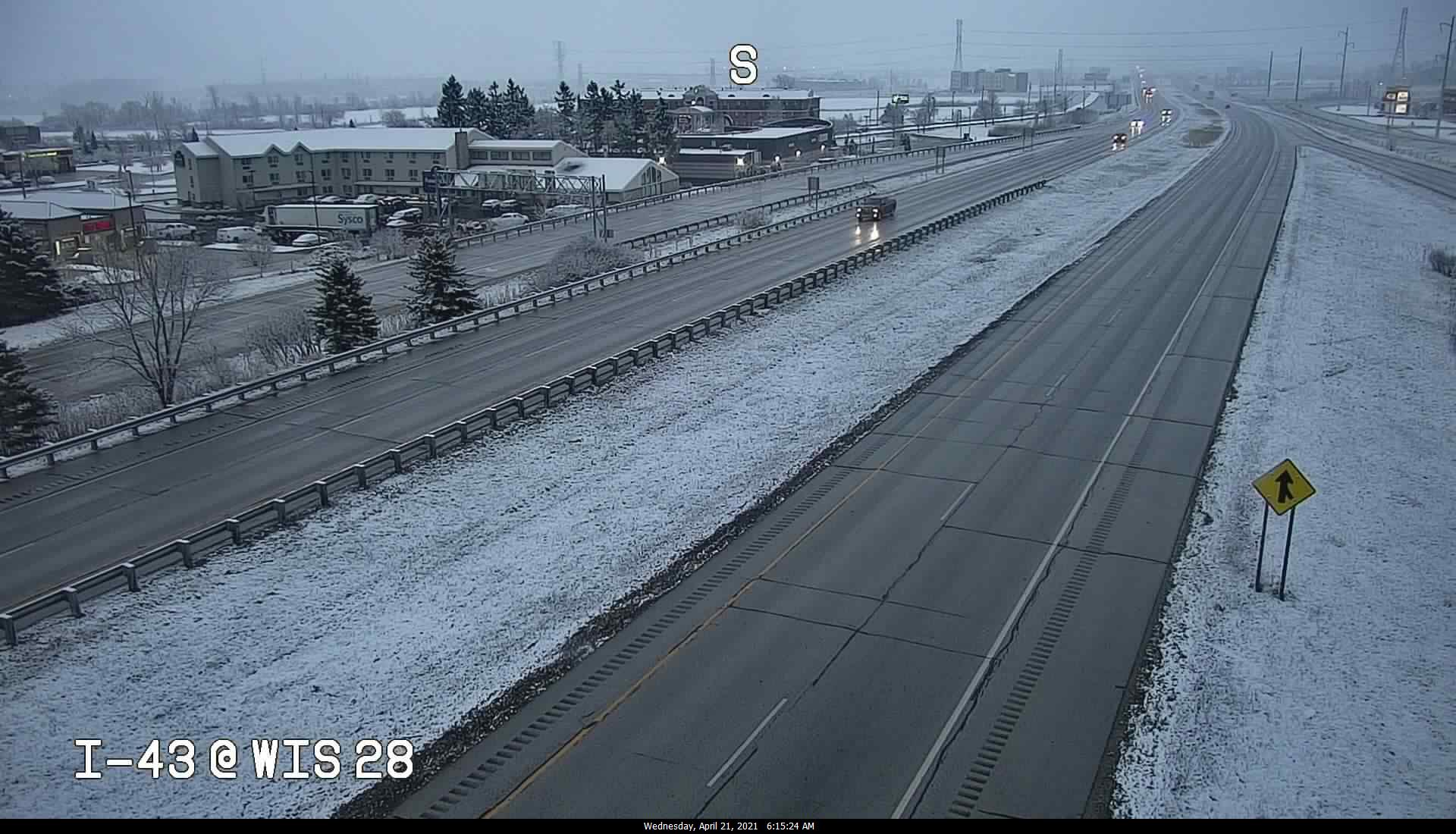 The snow showers will expand south throughout the morning and by midday into the afternoon and evening we will likely see a good amount of scattered showers throughout the area. Most of this will just be snow but it could mix with some rain at times. The snow showers could be heavy at times reducing visibility down to a mile, but roads should mainly stay wet. Bridges and overpasses could get a little slippery. 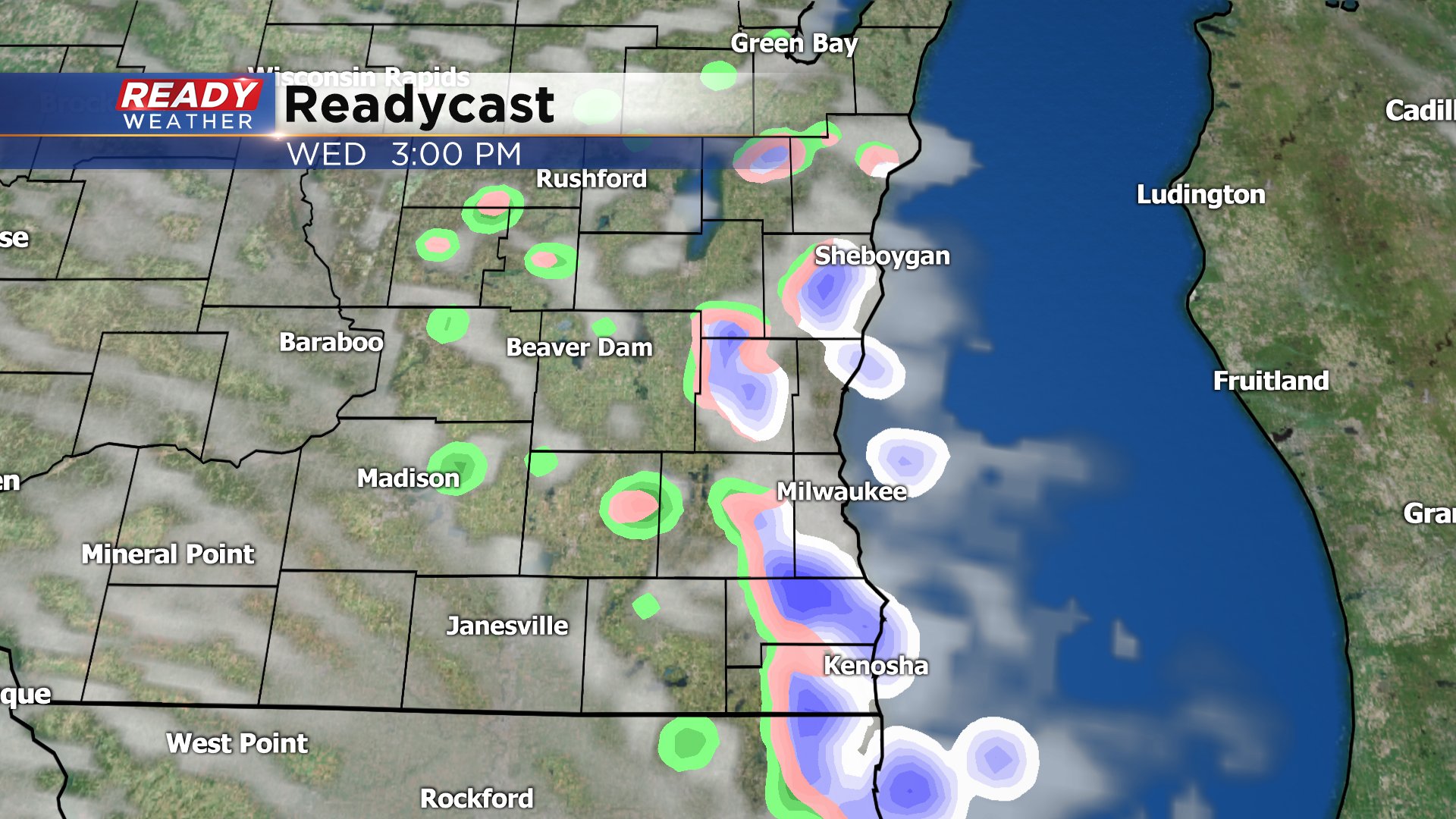 Although accumulating snow does look likely, it will mostly stay on grassy and other cold surfaces like wooden decks and glass patio tables. A few tenths of an inch is possible in most spots with up to an inch of snow not out of the question. Areas east of a line from Fond du Lac to Oconomowoc to Burlington have the best chance to see the accumulating snow. Our western counties likely only see a few flurries. 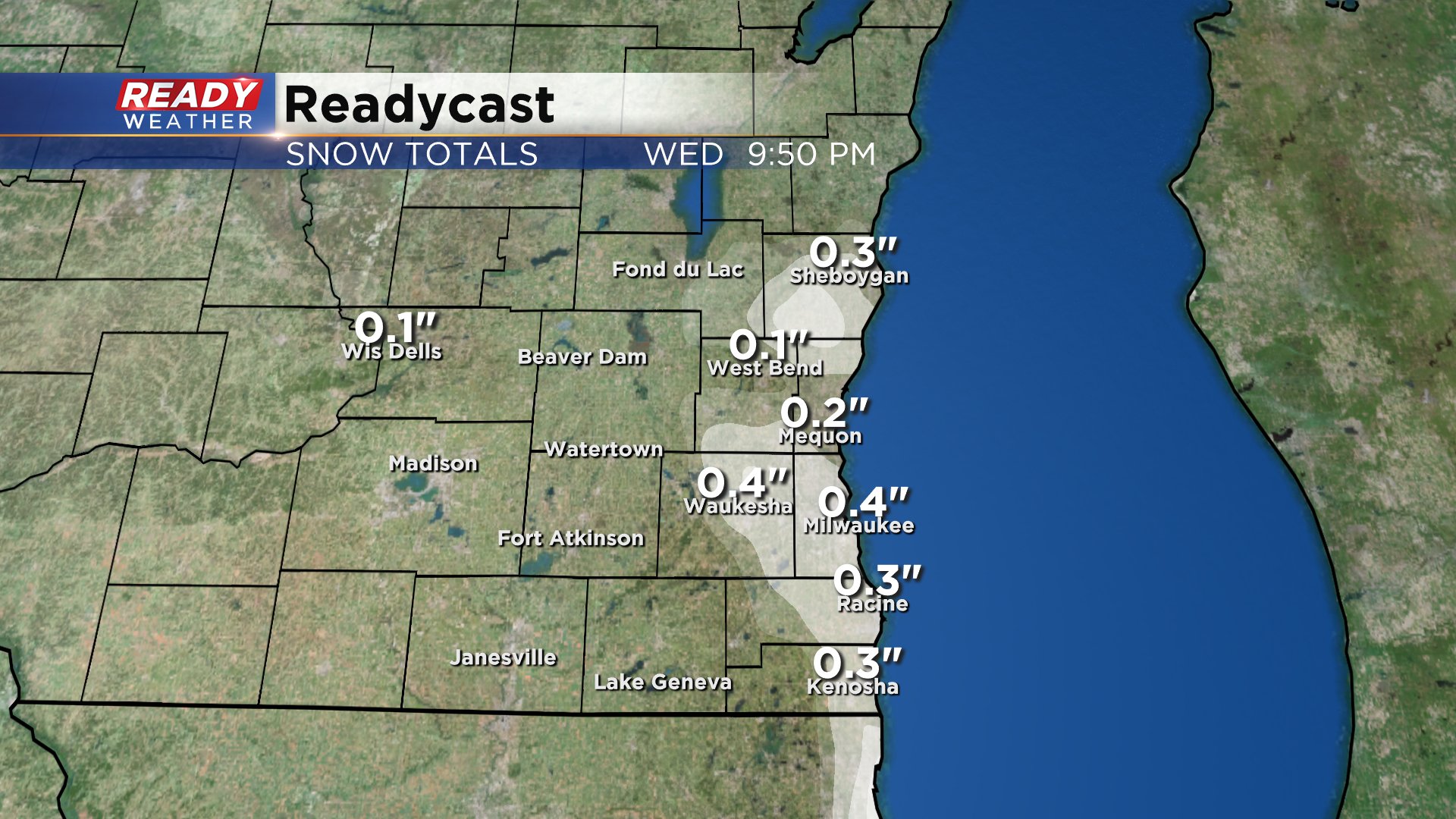 Seeing snow in April is not unusually at all in Wisconsin. Nearly 75% of Aprils in Milwaukee see measurable snow over 0.1". Last year we even got a tenth of an inch without much snow at all and in April 2018 Milwaukee picked up 10". Only eight Aprils since 1884 haven't seen any snowflakes at all. Going into Wednesday Milwaukee has seen a trace of snow which means just a few snowflakes but nothing measurable. April averages 2" of snow so seeing an inch of snow is definitely not unusual. 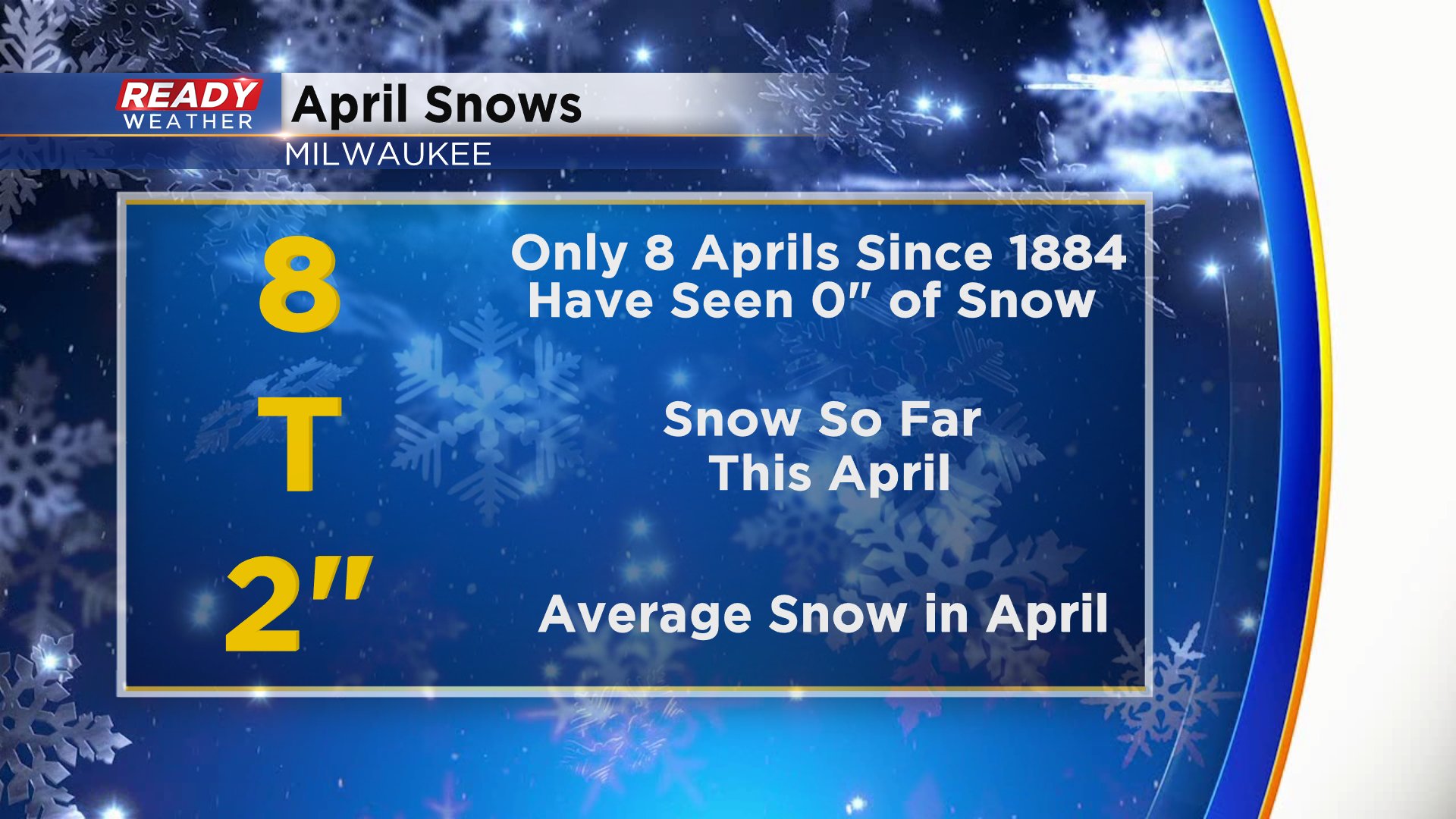 Download the CBS 58 Ready Weather app to track the snow showers throughout the day!