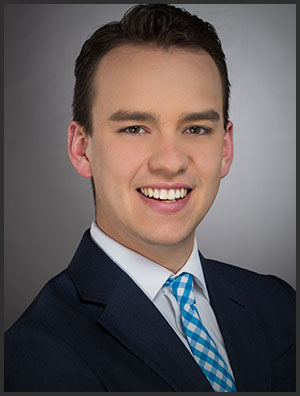 After working the weekend shift for four years Justin was promoted to the morning show in 2019. He started at CBS 58 as a freelance meteorologist in 2015 and was promoted to weekends a few months later. Justin looks forward to getting southeast Wisconsin ready for their day when they wake up. Since arriving in Wisconsin he has forecasted and reported on tornado outbreaks, record flooding, extreme temperature swings and late spring snow storms.

Justin has spent all of his adult life in the Midwest, but he actually grew up in New York. Living in the Northeast Justin had a chance to experience it all: thunderstorms, big winter nor’easters and the occasional threat of a tropical storm. Unlike some meteorologists, Justin wasn’t a weather nerd his whole life. Sports, acting and singing took up most of his childhood and it wasn’t until high school that he decided to pursue his passion of weather.

After moving to the Midwest, Justin received his BS in Meteorology from Valparaiso University in northern Indiana. While at Valpo Justin took an interest in storm chasing and logged over 18,000 miles chasing all throughout the Plains states. After graduation, Justin moved to Minnesota where he worked for KAAL-TV in Rochester, MN forecasting for southeastern Minnesota and northern Iowa. In 2017 Justin was awarded the CBM (Certified Broadcast Meteorologist) from the American Meteorological Society.

Following Minnesota, Justin married his storm chasing partner Stephanie and checked another Midwest state of his list moving to Wisconsin. In October 2018 Justin and Stephanie welcomed their first child Leah. When not taking advantage of Milwaukee or forecasting “cooler by the lake”, Justin loves relaxing with family including his Wisconsin Humane Society adopted dachshund Peeta, enjoying a good movie or book, and singing on his church's worship team.

Since his arrival in Brew City Justin has loved touring the new breweries that pop up every month, has become an aficionado of Summerfest and loves cheering on the Brewers, Bucks and Packers.