Couple who paid Window Select $20,000 for unfinished project now close to getting refund

WAUKESHA COUNTY, Wis. (CBS 58) -- As dozens of unhappy Window Select customers scramble to get out of their contracts, hoping for a way to get their money back, one couple says they may be close to getting a refund by exploring something called a lien waiver.

Brandon and Nicole Luterbach say they signed a contract with Window Select in December of 2021. They were hoping to get work done on their Sussex home. "We were having 12 double hung windows replaced, a bay window put in and a new patio door," said Nicole Luterbach.

The Luterbachs say they were offered a discounted rate if they paid in full, so they did.

"We paid via check, the date that we signed the contract," they said. The total came out to $20,000 cash. They say Window Select deposited their check twice, telling them it was a mistake. After getting things sorted out with their bank, the couple says Window Select offered them Packers suite tickets for the inconvenience.

The Luterbachs say after attending the Packers game in January, they expected to get their windows in March as promised.

Unfortunately, like hundreds of other customers, the Luterbachs got nothing on their install date. Brandon Luterbach says as the date came closer, he called to confirm.

"Called their Menomonee Falls office and asked. They said your windows are on back order and won't be in 'til July," said Brandon.

The couple says they couldn’t understand why the company didn't call first to notify them. Upset about the unexpected delay, the Luterbachs called Window Select owner, Justin Kiswardy.

"No call back," they said. They waited until finally they saw CBS 58's coverage on Window Select, prompting them to start asking questions about where their money went.

After digging into the issue, the Luterbachs decided they no longer want to do business with Window Select and began the process of trying to cancel their contract using something called a lien waiver.

There are several types of lien waivers, but generally, a lien waiver is a document from a contractor, subcontractor, materials supplier, or other party to the construction project. It states they have received payment and waive any future lien rights to the property of the project for the amount paid.

Wisconsin law requires that contractors inform consumers of their right to receive lien waivers on a home improvement contract. Consumers can request a lien waiver even if one is not offered.

According to the Wisconsin Department of Agriculture & Consumer Protection (DATCP), getting a lien waiver prevents a subcontractor or material supplier from putting a lien on your home if the contractor does not pay the bills. This protects the consumer.

Window Select customers should have received and signed a document with their contracts called "Notice of Consumer's Right to Receive Lien Waivers." CBS 58 has obtained the Luterbachs' copy of this document.

The lien waiver serves as proof that your money was used to pay for your materials. The document legally protects homeowners in the event their materials were never paid for.

Without a lien waiver, the manufacturer could come after the homeowner later for unpaid materials.

The Luterbachs requested a lien waiver via email and in person, hoping it would provide them with proof that Window Select actually purchased their materials with their $20,000. "If you did order our materials and paid for them, we should be provided with a lien waiver," Nicole said.

According to DATCP, consumers have a right to request lien waivers as soon as money is exchanged.

The Luterbachs say calls and emails were not successful in getting what they needed, so they continued to go to the Window Select office to get things resolved. After several visits, the couple says they were never given the lien waiver and still do not have proof from Window Select that their materials were ever purchased.

Since Window Select did not produce the requested proof via the lien waiver, the couple was able to cancel the full order. Now they're encouraging other customers to request lien waivers and demand proof that their money was used to purchase their materials.

The couple is now expecting a refund check to be mailed but will still come out of this $3,000 short due to Window Select's cancellation fee.

Despite the back and forth, they say they're frustrated that they still don't have windows but are hopeful their refund check will arrive soon.

"Hope they still have money to do something with," said Brandon. The couple says they feel for the hundreds of customers who still don't have their windows and are worried about where their money went.

"We're seeing all these people who are owed money…we're a drop in the bucket," Nicole said.

Window Select is currently being investigated by multiple law enforcement agencies for possible fraud. CBS 58 confirmed that the investigation is still active and ongoing, with victims spanning across nine Wisconsin counties.

Any Window Select customer who paid for an order they're still waiting on and believes a crime was committed should reach out to their local police and file a report. Sgt. Marc Shield with the Brown County Sherriff's Office can also be reached concerning criminal concerns at marc.shield@browncountywi.gov.

Other customers should file complaints or learn more about how to request a lien waiver should visit www.datcp.wi.gov. Complaints can also be reported to Wisconsin's Better Business Bureau.

CBS 58 has made multiple attempts to speak to Window Select's owner, Justin Kiswardy and those requests have not been answered. 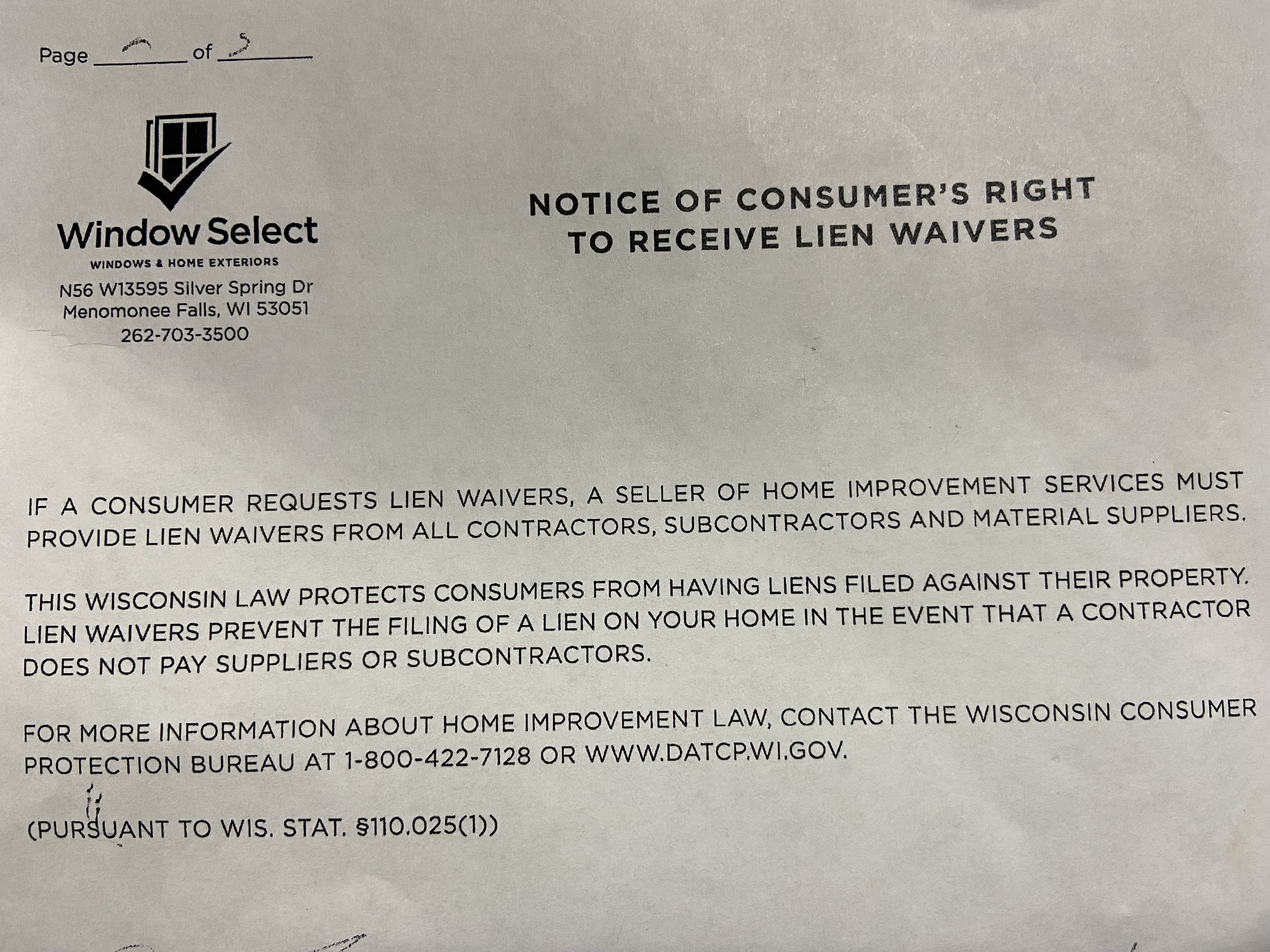