MADISON, Wis. (CBS 58) -- Democrats are making another attempt to repeal Wisconsin's criminal abortion ban by introducing an advisory referendum, a similar proposal Republicans swiftly rejected less than a week ago.

At a press conference Monday, Democratic lawmakers introduced a joint resolution that would ask voters whether the state's 1849 criminal abortion ban should be repealed. The advisory referendum includes the same language as a substitute amendment Democrats tried to advance on the Senate floor last week to replace a Republican-backed proposal on welfare eligibility. 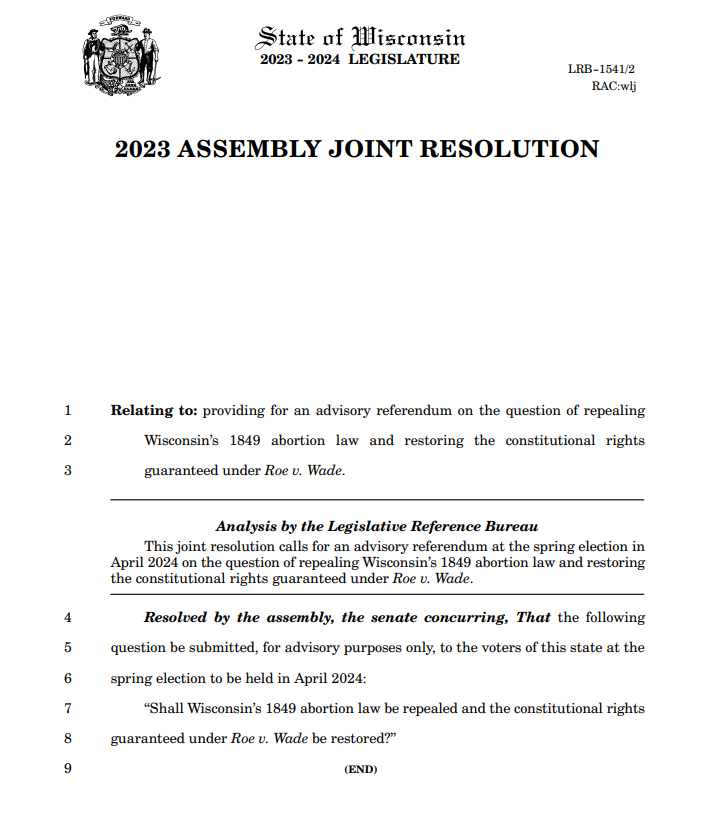 "The people of Wisconsin are talking about abortion," said Rep. Lisa Subeck (D-Madison). "This has been a huge assault on our freedom and people want their freedom back. Let's give them a chance to make their voices heard."

The Democratic resolution seeks to place the abortion question on the April 2024 ballot, but the GOP-controlled Legislature is unlikely to consider it after recently approving two referendums for the April 2023 ballot on bail and work requirements for welfare recipients.

While lawmakers wait for the courts to review a challenge to the 1849 near-total ban, Democrats say they will continue to fight for reproductive rights.

Some Republicans are open to passing legislation to add exceptions for rape and incest to the abortion ban, but Democrats argue that's not enough. They prefer going back to laws prior to the U.S. Supreme Court overturning Roe v. Wade, which legalized abortions in Wisconsin up until 20 weeks of pregnancy.

"There is so much that goes into this decision-making and every patient is different," said Kristin Lyerly, an OBGYN from Wisconsin. "How do you put that into law?"

Lyerly is now working in Minnesota where abortion remains legal, a choice she made out of fear she wouldn't be able to provide adequate care to her patients.

She said Wisconsin's 1849 law is vague because it only allows doctors to perform an abortion if a mother's life is in danger. If complications were to arise, such as an ectopic pregnancy, Lyerly said sometimes abortion procedures are necessary before a woman's health is at risk.

"How sick does my patient have to get before we can save her? And if we wait too long, can we save her?" said Lyerly.

Senate Majority Leader Devin LeMahieu (R-Oostburg) said he supports making the law clearer, but Assembly Speaker Robin Vos (R-Rochester) expressed doubts in an interview with the Milwaukee Journal Sentinel that these types of scenarios are happening across Wisconsin.

Wisconsin Right to Life, a pro-life group, said in a statement to CBS 58 they agree that "the current medical emergency exception should be strengthened and clarified if necessary."

Rep. Subeck and other Democrats who attended the press conference declined to say whether they would support adding changes to 1849 ban to define the health of the mother. Governor Tony Evers has signaled he would veto proposals that would keep the abortion ban in place.

The state Supreme Court race in April is anticipated to play a major role on abortion policy in Wisconsin with liberals and conservatives vying for control of the high court.

The two liberal candidates, Everett Mitchell and Janet Protasiewicz, have been outspoken about this issue, calling the overturning of Roe v. Wade the worst decision by the Supreme Court.

Meanwhile, the conservatives in the race, Daniel Kelly and Jennifer Dorow, have not publicly shared their views about the abortion lawsuit. Kelly does have the backing of anti-abortion groups, including securing an endorsement from Wisconsin Right to Life on Monday.