Kids usually stay consistent when they socially transition young, according to a study 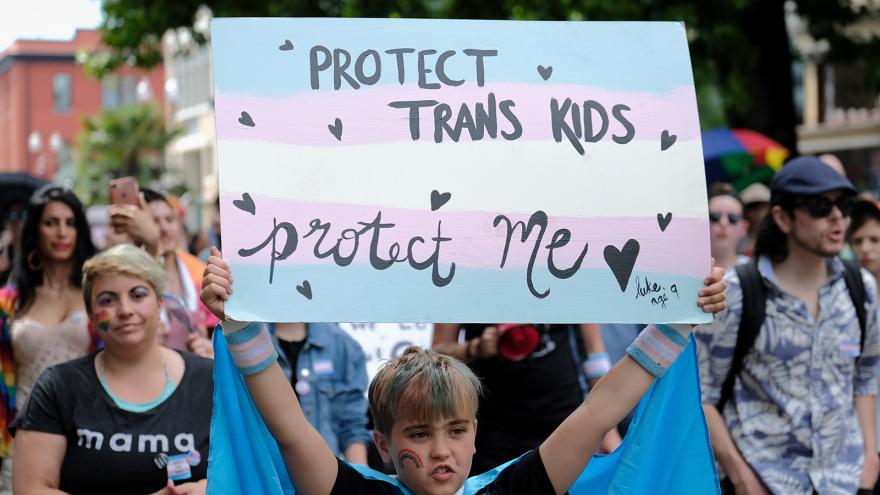 (CNN) -- Nicole Talbot was 13 when she faced her school assembly, her principal by her side, and told her classmates for the first time something she had always known: She was a girl.

Talbot said she is often asked when she knew she was trans, and that her answer is simple -- she always knew who she was.

Her mom could see it early, too. Before she transitioned, she played with trains, but hers had tea parties. She traded her elephant Halloween costume with a friend to be Cinderella. And she loved Mulan, a girl who had to pretend to be a boy to fit in.

Some trans children want to begin a social transition at a young age, where social factors like their name, clothes and appearance match their gender identity. But some families hesitate to support the social transition, especially considering the possibility of retransition, when a child transitions to a nonbinary gender or the gender that aligns with the sex they were assigned at birth, said Kristina Olson, a professor of psychology at Princeton University.

"There's a lot of discussion about early childhood social transitioning, whether it's a good thing or a bad thing," Olson said. "Despite there being a lot of talk about it, there is surprisingly little data."

Olson and a team of researchers added to the data in a study published Wednesday in the journal Pediatrics. They found that of the more than 300 transgender kids who socially transitioned from 3 to 12 years old, only 7.3% retransitioned within the next five years.

"These results reiterate the need to believe children and adolescents (and adults) when they assert and share their gender with the adults in their lives," said Russ Toomey, professor of family studies and human development at The University of Arizona, via email. Toomey was not involved in the study.

Retransitioning is often used in conversations as a reason not to support a child's transition, Olson said.

What if they change their minds? What if the experience of transitioning is traumatic and then they go through trauma all over again?

Some may ultimately view their transition as a "mistake," but others may see it as a step in their continued gender exploration, said Julia Serano, a trans activist and author of "Whipping Girl: A Transsexual Woman on Sexism and the Scapegoating of Femininity."

"Most people I personally know who have retransitioned continue to feel affiliated with and/or supportive of transgender people and communities," she added.

"Adolescence and young adulthood are characterized as periods of transition in our development; this is the exact time when we're learning about who we are and how we fit into the rest of the world. Sometimes this means trying new things out and seeing if they fit," said Myeshia Price, senior research scientist for The Trevor Project. Price was not involved in the study.

Olson and other researchers are looking further into the experience of retransitioning, and the data so far shows that the emotional difficulty of the experience depends on the support the individual gets.

"The children in this study had parental support for social transition at a young age. Not all Trans+ children are so lucky," Devor said via email.

When Talbot was in fifth grade, her mother found a camp for children and families to explore gender identity. That is where Talbot said she was able to put language to what she was feeling all along.

But Devin Green had to bring his parents on board with the journey.

Green was born into a conservative Jamaican household, and his family moved into a very religious group in North Carolina.

"I grew up in an environment that didn't think it was OK for me to be different," Green said. But by ninth grade, he felt very firm in his trans identity.

When he came out to his parents, they reacted with fear that presented as anger, he said.

"In Jamaica, people are often killed for coming out, so coming out as a member of the community in any capacity is really scary," he said. It took some convincing before the family began investigating trans support organizations.

It can be difficult to know how to support your children when you are dealing with concerns over their physical and emotional well-being, but both Talbot and Green advised families to follow their child's lead.

"Love your children and support them to explore what gender means to them. Trust them to find their way to their most suitable gender," Devor said.

Research from The Trevor Project has shown that "transgender and nonbinary youth who reported having pronouns respected by all or most people in their lives attempted suicide at half the rate of those who did not have their pronouns respected," Price said.

"If you don't understand your child's feelings around gender, educating yourself on gender identity and the issues facing trans youth with resources such as The Trevor Project's Guide to Being an Ally to Transgender and Nonbinary Youth is a great place to start," Price added.

Talbot, now 20, is an advocate, singer and performer. Green, 19, is getting ready to attend law school in the fall in hopes of furthering LGBTQ rights. His family members have become advocates as well, and his mother is getting a doctorate in nursing practice with a focus on LGBTQ issues.

"I've never looked back," Talbot said. "That doesn't mean that prior to my transition and post-transition life hasn't been difficult, but the difference is ... I'm facing those things as myself."

Correction: A previous version of this story incorrectly stated Aaron Devor's involvement in the study.