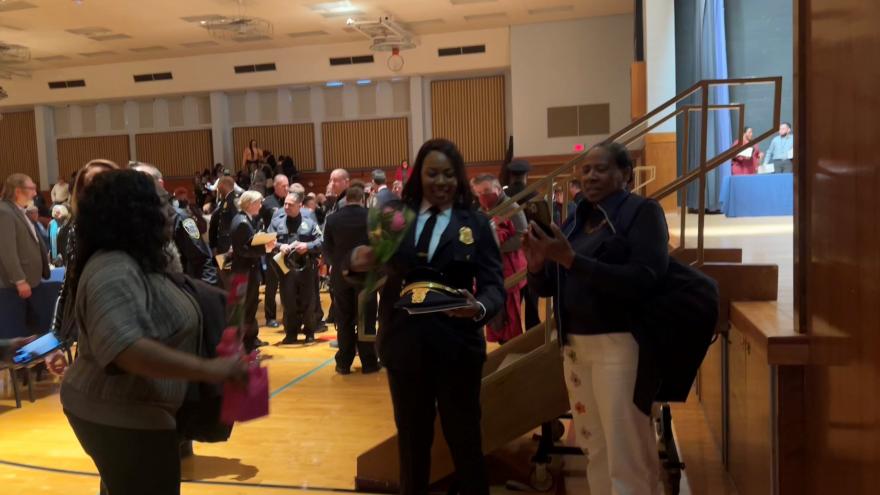 MILWAUKEE (CBS 58) -- On Friday, Feb. 18, men and women of the Milwaukee Police Department were promoted during a ceremony.

Six captains, 11 lieutenants,  20 sergeants, and 11 detective positions were filled for the department.

One newly promoted captain, who grew up in Milwaukee's 53206 ZIP code, says her success is against the odds.

On Friday during the ceremony, Sheronda Grant's mother pinned the new badge on her uniform.

"She started off as a police aid and I pretty much saw her go through the ranks," said Sherri Porter. "So, I knew that she was going to be a captain."

Grant has a message to her neighbors.

"I'm telling you, it doesn't matter where you start. It absolutely matters where you finish," said Grant.

Grant thanked two former, female police officers for helping get her to this point-- her mother and her mentor.

Ada Wright was an officer for the Milwaukee Police Department in the 70s, and the first female officer on the department.

"She told me, 'Sheronda, educated women, they open the door and they hold the door open, even if they can't walk through it.’ That's what I'm doing today. I'm holding this door open and we're walking through it," said Grant.

Her message resonated with everyone as they clapped. Grant wants other women, especially those of color, to know that police captain is an attainable job.

Grant has been with MPD for 20 years.