MILWAUKEE, Wis. (CBS 58) -- The Milwaukee Fire Department Administration Building now carries the name of the man who designed it six decades ago.

The administration building in downtown Milwaukee was built in 1962. Alonzo Robinson was the lead architect, but that's difficult to tell from historical records.

"The groundbreaking, construction, dedication and grand opening of this key part of Milwaukee's infrastructure -- I find not one mention of lead architect Alonzo Robinson," said Fire Chief Aaron Lipski.

"I went and looked at some of the historical pictures. There was no pictures of my dad," said Robinson's son, Kim Robinson.

Lipski spoke directly to the Robinson family during a ceremony Tuesday.

"Please accept, on behalf of the Milwaukee Fire Department, our deepest apologies for what was likely not a simple clerical oversight but rather a visible and painful slight, based not on Alonzo Robinson's talent or expertise but on the color of his skin," the fire chief said. 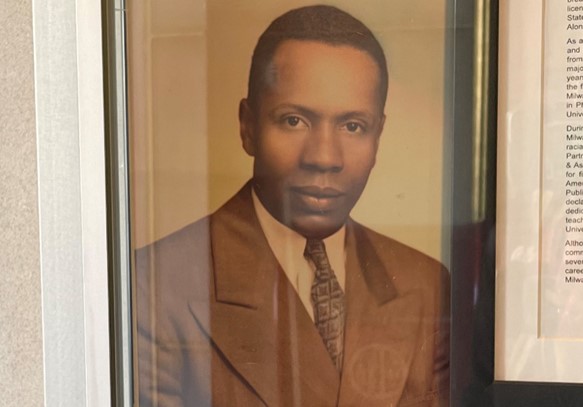 His architectural career spanned 50 years. He died in 2000 after a 5-year battle with cancer.

The idea for the dedication of the building first came from Kim Robinson. He approached Common Council President Cavalier Johnson about naming a building or street in honor of his dad.

After seeing the new sign, Kim Robinson said, "Wow, my dad's name is on this building."

Tuesday was also the birthday of Alonzo Robinson's wife, Theresa. Dozens sang Happy Birthday to her ahead of the ceremony. Her children said that made the day even more special.

Alonzo Robinson was the first African American architect licensed by the state of Wisconsin. The second was Walter Wilson, who attended and spoke at Tuesday's ceremony.

"I'm standing on his shoulders, believe it or not. There are a lot more licensed architects in Wisconsin now and they look back at my past as well as Alonzo's," Wilson said.

"Didn't you say you wanted to be an architect one day?" Robinson asked Mason.