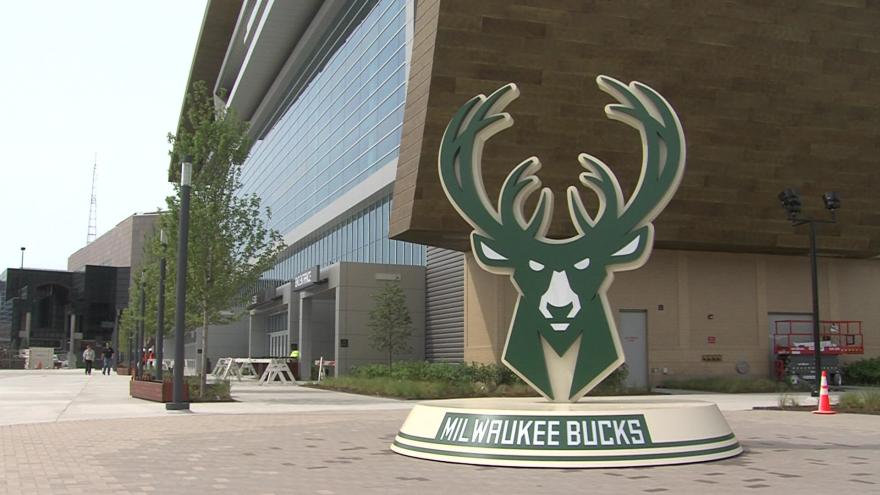 MILWAUKEE (CBS 58) -- The NBA season is just a few months away, and the Milwaukee Bucks announced their full schedule for 2022-23.

Here are 10 exciting matchups, in chronological order, to watch this upcoming season.

Opening night, two MVP frontrunners and a long history of playoff competition makes for an exciting start to the 2022-2023 season. The Philadelphia 76ers will head into the matchup looking to better perfect the James Harden/Joel Embiid Duo that was formed late last season. Meanwhile the Bucks return after losing the title of "reigning NBA champions," hoping to climb to the top of the league yet again. To do that, the Bucks will be looking for another MVP-caliber season from Giannis Antetokounmpo, just as the 76ers are looking for Embiid to finally claim his first MVP trophy after being runner-up in MVP voting each of the last two seasons. Philadelphia is the team Milwaukee has faced most often in the playoffs, playing nine series and 49 playoff games over 31 years. Oct. 20 on national TV (TNT), both Eastern Conference powerhouses will come out swinging.

While the last decade hasn't produced Bulls and Bucks teams being competitive at the same time, these two teams are now the leaders in the Central Division and are coming off a first-round matchup in last year's playoffs where the Bucks flexed their superiority. Battling injuries in the second half of the season, Chicago hopes to stay healthy and go toe-to-toe with Milwaukee, a team that's claimed the Central Division the past four seasons.

When you're a championship team with a two-time MVP, there's a target on your back and the league's stars circle the date when you're set to play. The last time the Mavericks came to the Fiserv Forum, Luka Doncic and Giannis went back-and-forth in a game that came down to the final few minutes. These international superstars are coming fresh off competing in EuroBasket and the World Cup Qualifiers and are two of the best in the NBA. Milwaukee hosting Dallas in November should feature two MVP potentials going for the knockout punch for 48 minutes.

The Mecca. Madison Square Garden is where the NBA's biggest stars shine the brightest. Since the 2016-2017 season, Giannis has averaged 24.6 PPG, 13.3 RPG, 6.8 APG, 2.0 SPG, and 1.5 BPG on the Knicks' homecourt. Not to mention one of the most head-scratching posters we've seen from the Greek Freak. We'll have to wait and see what he has in store this year.

When you're looking to secure a title, seeing how you matchup against the defending champions can often serve as a benchmark of where your team needs to be. Golden State's confidence is sky-high proving they can win without Kevin Durant or an injury-riddled Cavaliers team and will give Milwaukee a tough test in the Cream City. Two of the deepest teams in the league and the last two NBA Champions won't be holding back.

The sour taste of defeat following the Eastern Conference Semi-Finals has fueled the Bucks for months as they gear up for another run at a title. Who knows what Boston's roster looks like come Christmas, as trade rumors continue to swirl around Kevin Durant, but however the chips fall, the Celtics will be one of the biggest threats in the East. The sweetest gift of all this Christmas, might just be a piece of revenge after a Game 7 loss (what will be) seven months ago.

The NBA is adapting to the times and limiting how taxing a season can be on a player. As a result, there's less back-to-backs, less three games in five days and less travel. In January the Bucks will take a trip down to Miami to face the Heat twice in three days. Having played each other twice in the last three playoffs, and splitting the two series, these two teams will have no love lost in nearly 100 minutes of competition over the two games. This should be a test of Milwaukee's mental toughness, going up against a physical and relentless Miami squad in back-to-back games.

The last four MVP trophies are in possession of just two players: The Greek Freek and The Joker. Two of the most dominant players in basketball will show off their well-rounded games at Fiserv Forum. In the 12 times the two of played against each other in the NBA, Giannis has averaged 23.4 PPG, 9.7 RPG, 5.1 APG to Nikola Jokic's 21.6 PPG, 9.8 RPG, 8.4 APG. Their playstyles are quite the contrast, but the numbers don't like. They know how to play the game to win.

Two of the greatest freaks of nature in the game will lace 'em up on NBA TV. Assuming Zion Williamson is able to play, it's almost certain both he and Giannis will do something that will make you daydream for just a pinch of their natural athletic ability. Besides the star power down in New Orleans, the Pelicans wowed NBA fans with their gutsy performance against the Phoenix Suns in the first round of last year's playoffs. With wing depth, a bright young coach, and one of the faces of the league locked in for the next five years, the Pelicans are no easy matchup.

The Battle for the Crown. Giannis has come for the throne that LeBron has sat on for nearly two decades. With two MVPs and a championship in the last three years, Giannis has made his case for best player in the association. Still, LeBron doesn't let up. Entering his 20th season, lining up across the court from LeBron James is still considered one of the, if not the, ultimate tests. As for the King's teammates, who knows who will be beside him. Anthony Davis has struggled with injuries, and it no longer seems certain Kyrie will end up in LA (this year). Whether it's a tight game or a blowout, these two juggernauts should still provide fireworks.