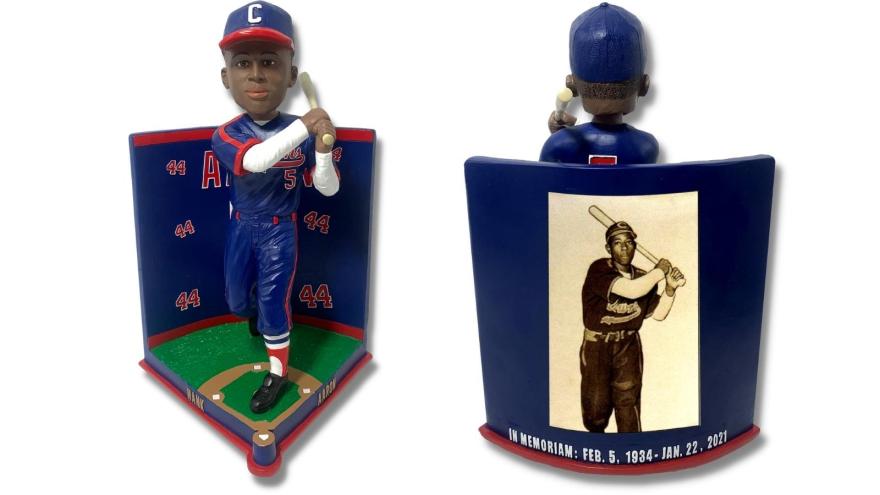 Wearing a blue Clowns’ uniform with red and white trim and the number five on the jersey, the over-sized nine-inch bobblehead features a swinging Aaron batting in the same pose as his first known card, which was a team issued postcard from 1952. A replica of the postcard is on the reverse side of the backing, which has his Clowns’ #5 and professional #44. The bobblehead is on a baseball field base which has Aaron’s name on the front and “In Memoriam: Feb. 5, 1934 – Jan. 22, 2021” on the back.

The bobbleheads are available for purchase through the National Bobblehead Hall of Fame and Museum’s Online Store. Each bobblehead is individually numbered to only 755 to commemorate his 755 MLB career home runs. The bobbleheads are $44 each plus a flat-rate shipping charge of $8 per order.

On Nov. 20, 1951, 17-year-old Aaron was signed by scout Ed Scott to play shortstop for the Indianapolis Clowns, one of the storied franchises in the Negro American League. Scott, who became the first African American scout in the history of the Boston Red Sox, spotted Aaron playing in a softball game in Mobile, Alabama. “If that boy can hit a softball that far, how far can he hit a baseball?” Ed Scott Jr. quoted his father as saying. In his three-month stint playing for Clowns manager Buster Haywood during the 1952 season, the cross-handed hitting Aaron played shortstop and batted third or cleanup. In 26 games, Aaron batted .366 with five home runs, 33 RBI and nine stolen bases, according to the Howe Sports Bureau.

Aaron, who earned $200 month with the Clowns, received two MLB contract offers via telegram due to his standout play. In the end, he chose the Boston Braves over the New York Giants. After spending the 1952 season with the Eau Claire Bears in Eau Claire, Wisconsin, Aaron played with the Jacksonville Braves in 1953 before making his big-league debut with the Milwaukee Braves in 1954.

"Hank Aaron will forever be one of the best players in baseball history, and part of that history includes his time with the Indianapolis Clowns,” National Bobblehead Hall of Fame and Museum co-founder and CEO Phil Sklar said. “It’s important to remember the history of the Negro Leagues, and this special edition bobblehead will help keep that part of Aaron’s legacy alive.”