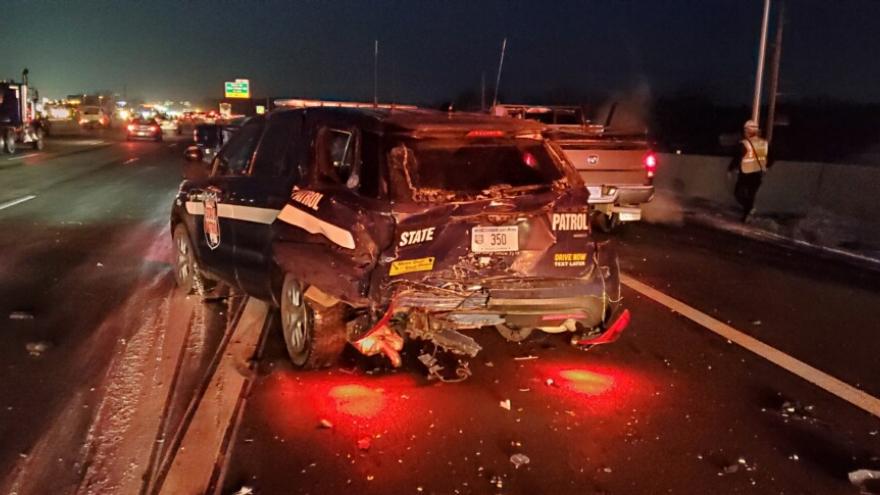 WISCONSIN (CBS 58) -- For the second time this week, a state trooper's cruiser was struck on a Wisconsin interstate.

The incident on Wednesday, Dec. 8 marks the second time a trooper escaped injury this week after a driver hit their vehicle.

On Monday afternoon, Dec. 6, a trooper was pulled over on the shoulder of I-94 in Dane County when a semi tractor-trailer sideswiped his cruiser. The trooper was sitting inside the vehicle assisting with a traffic stop at the time. State Patrol says the semi driver did not move out of the right lane or slow down when passing the cruiser.

On Wednesday morning, WSP says a driver on I-41 in Winnebago County lost control while traveling too fast in icy conditions and passing a crash scene. A trooper was outside checking on those involved in the initial crash when the vehicle rear-ended his cruiser that was pulled over on an off-ramp.

Luckily, no one was injured in either crash.

State Patrol says in both incidents, the troopers' emergency lights were activated, meaning drivers should have moved over or slowed down.

“Our troopers are lucky to have survived these incidents. They put their lives at risk to help keep our roads safe,” Superintendent Anthony Burrell said. “We need every driver to recognize the dangers first responders face and move over when their emergency lights are activated.”

Wisconsin's Move Over law requires drivers to move out of the lane closest to stopped law enforcement vehicles, ambulances, fire trucks, tow trucks, utility vehicles or highway maintenance vehicles with warning lights activated. If a car cannot move over, drivers must slow down.

Violations of this law can result in a citation of $263, or more if someone is hurt or killed.

State Patrol says in 2020, there were 632 convictions for Move Over law violations.

They say citations for this week's incidents are pending Dane and Winnebago County investigations.