NEXT:
See Also Racine police caution women to avoid man suspected of victimizing women on dating apps
SOUTH MILWAUKEE, Wis. (CBS 58) -- The latest woman to fall unconscious in the presence of a wanted man has died. Timothy Olson is still on the loose. Racine police warn Olson is a danger.

South Milwaukee Police Department is investigating the death. A news release was careful not to directly connect the death to Olson yet.

But it is confirmed Olson is wanted for preying on women, at least three have fallen unconscious while with him, and he was with the latest victim before she died.

Olson is not in custody, which means he could be on a date right now. 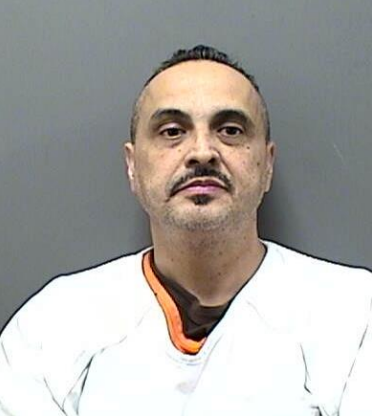 Joe Braun is the owner of the Power on 10th bar in South Milwaukee, where the woman fell unconscious. He said it happened in just a matter of moments. "As she was trying to take a drink, she raised her glass and she just froze up. From what we can tell she went into cardiac arrest."

Last Thursday the 55-year-old woman walked into Power on 10th with Olson. They ordered drinks, but before she could even take a sip, she started to have a medical emergency. 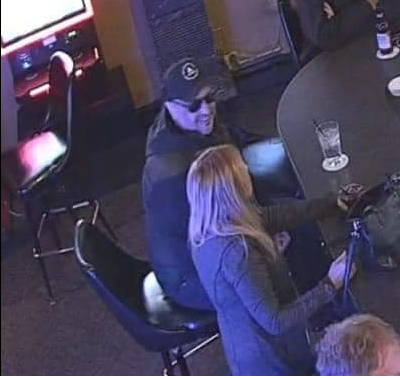 Still image from a bar's security camera video that shows Timothy Olson with the woman Nov. 17

Braun said, "My bartender reached across instantly and grabbed her hand to keep her from falling."

The bartender and patrons focused on the woman. Olson said he was running out to get her inhaler, but he never returned.

She was taken to the hospital. The medical examiner's office confirmed she died there just before 2:30 a.m. Tuesday morning.

Braun said, "Wherever it took place, it would be nice if someone knew more information of what happened that day."

Braun said he'd never seen Olson in his bar before, but the woman was a friendly regular who was friends with a few bartenders. "She'd have a drink and a glass of water with every drink, practically. She wasn't a huge partier or anything, she just came and had a couple drinks."

Racine police first warned about Olson Nov. 9, saying he meets women on dating apps and victimizes them for financial gain.

In a criminal complaint against Olson from early September, a woman told investigators he possibly drugged her after they met on a dating site. She said at the end of the date "she soon blacked out and thought she was "rufied" [sic], and that she "thought he could have put something in her drink". 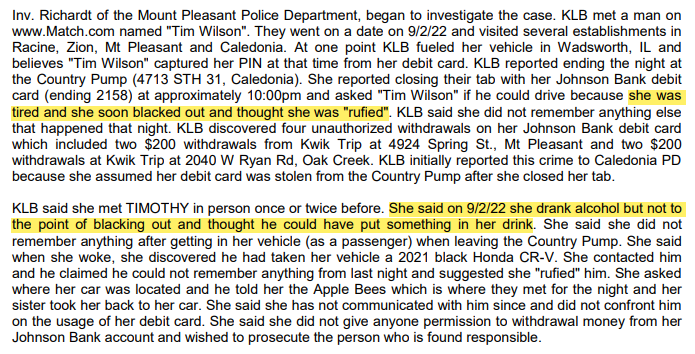 In a criminal complaint from an incident on Sept. 2-3, a woman told investigators she thought Timothy Olson drugged her

Now it's even more serious. Racine police said the woman who died is the third woman they know of to end up unconscious in Olson's presence. There could be more.

Olson currently has a warrant for five counts of identity theft in Mount Pleasant. He's also wanted by US Marshals. 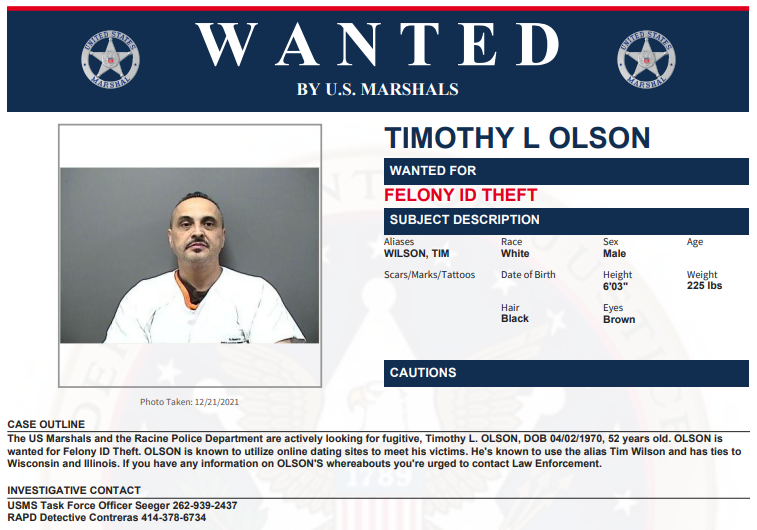 Racine police issued another warning this week. The woman died shortly after that alert.

Braun said, "Our hearts go out to the family. We're all pretty much in shock still that this all happened."

South Milwaukee police are investigating the death, but the department is refusing to speak about the case even though Olson is still a potential danger.

South Milwaukee PD is also not allowing the medical examiner's office to release its findings, including the autopsy results.