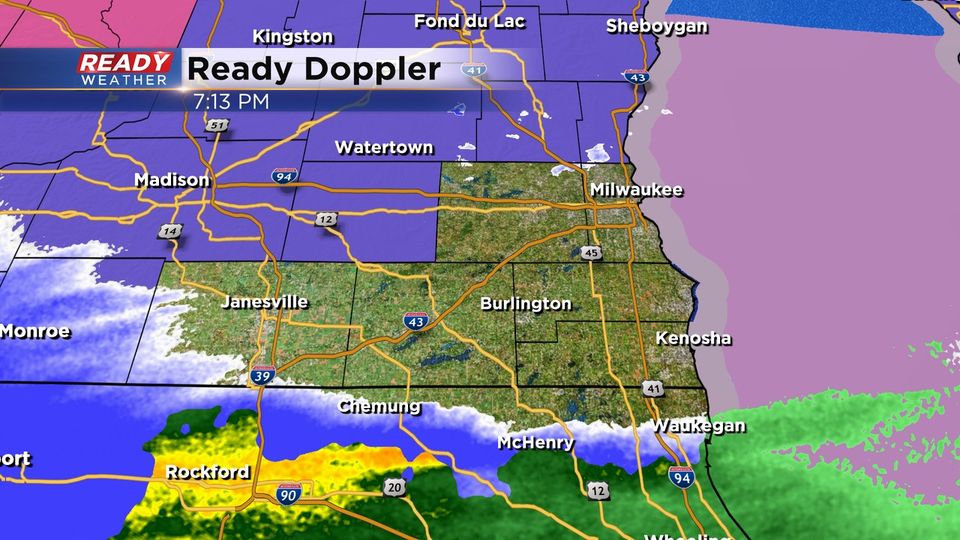 No changes to the going forecast.  We've seen some light snow and a mix across portions of Milwaukee County this afternoon and evening; however, the push for heavier precipitation will occur through 10 pm.  You can see the mix just across northern Illinois. The precipitation will be moving south to north.  The Winter Weather Advisories go until Noon Thursday. 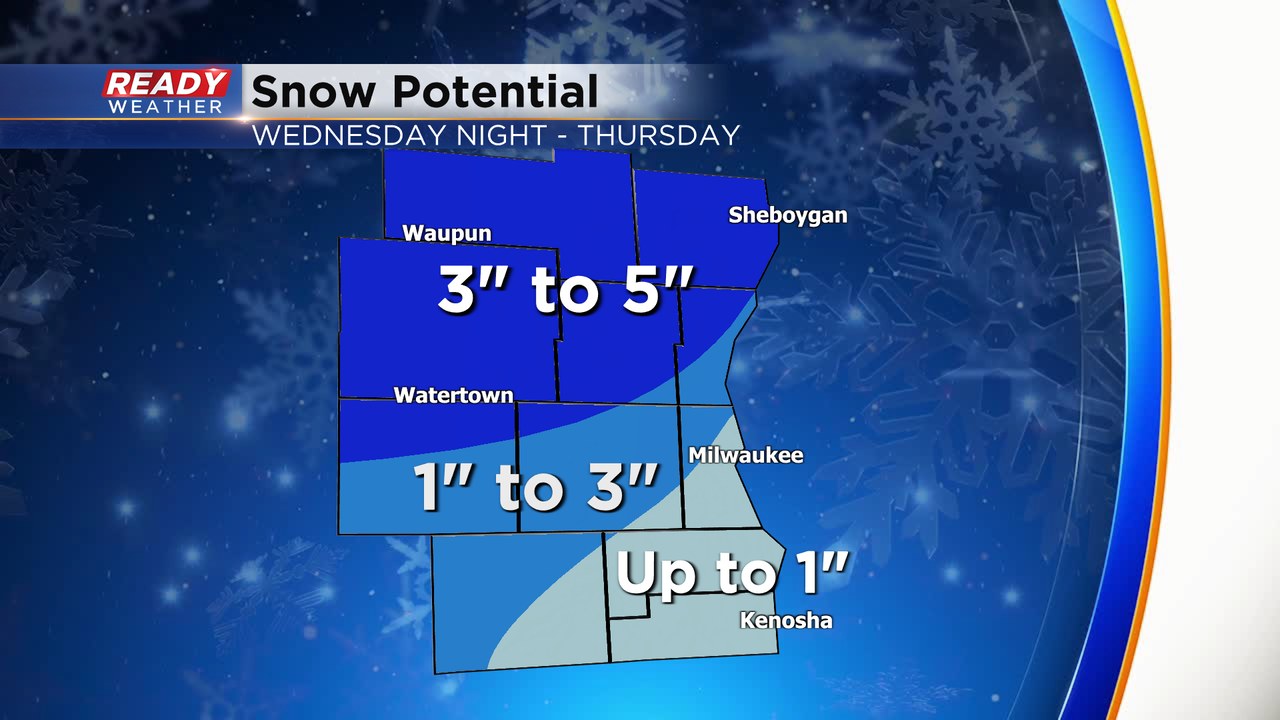 There is a lot of uncertainty regarding the zone of 1" to 3".  Sleet is possible within that zone, and that could cut into totals.  The best chance for 3" to 5" of wet slushy snow will be across our northern counties.

A lot of the lakeside areas will see more of a mix of rain and some snow with little accumulation.

The forecast remains on track. This incoming system remains consistent as to what we've seen for so much of this season and that's RAIN, snow in spots and a slushy wintry mix. Here's the latest radar image: 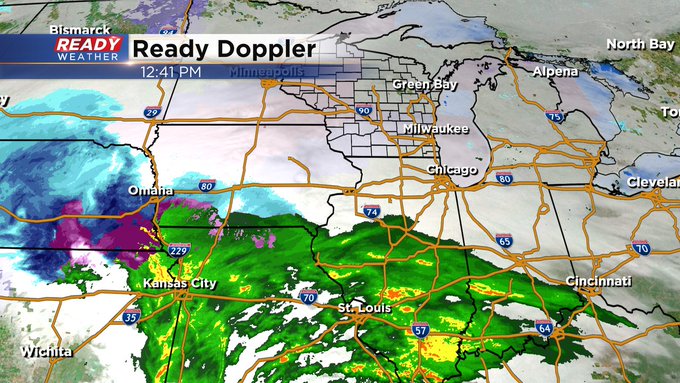 As you can see there's plenty of wet weather on the way. It rolls over the border into Wisconsin around 7pm this evening and by 9-10pm expect wet weather in progress for most of the area, including the metro. While snow is likely for locations north of I-94 we also expect primarily rain for points south. The good news is that most of the wet weather falls during the course of the overnight helping to limit impacts on roads. And I do think that there could be a brief period of time where even Milwaukee sees a switch of that rain to some snow maybe gaining us a slushy half inch. The onshore wind will make it tough to see any real decent snow accumulation for Milwaukee and points south. Meanwhile, this wet snow will be pilling up for our northern spots, think places like Beaver Dam, Fond du Lac and northern lake locations like Sheboygan. While falling precip looks to wrap up around sunrise, wet roads will still be widespread for the morning commute. Communities north of I-94 could have slick roads and even snow covered roads. A few spotty showers remain possible during the day on Thursday although we aren't expecting additional accumulation. Be sure to download the CBS58 ReadyWeather app to stay ahead of the storm and help plan your day!

No changes with the track of the storm or our expected snowfall totals. Snow and mix rolls in after 8 PM Wednesday evening with the bulk of the accumulation overnight through 7 AM Thursday morning then lingering rain and snow showers the rest of Thursday. Even though snow totals shown below won't be super heavy, the snow is still going to come down at a heavy rate with an inch per hour possible at night. A high snow rate combined with a wind that gusts to 30 mph at night could cause some visibility issues and make driving at night tricky. We will also watch any freezing rain or sleet that develops. Roads should be improving during the Thursday morning commute. 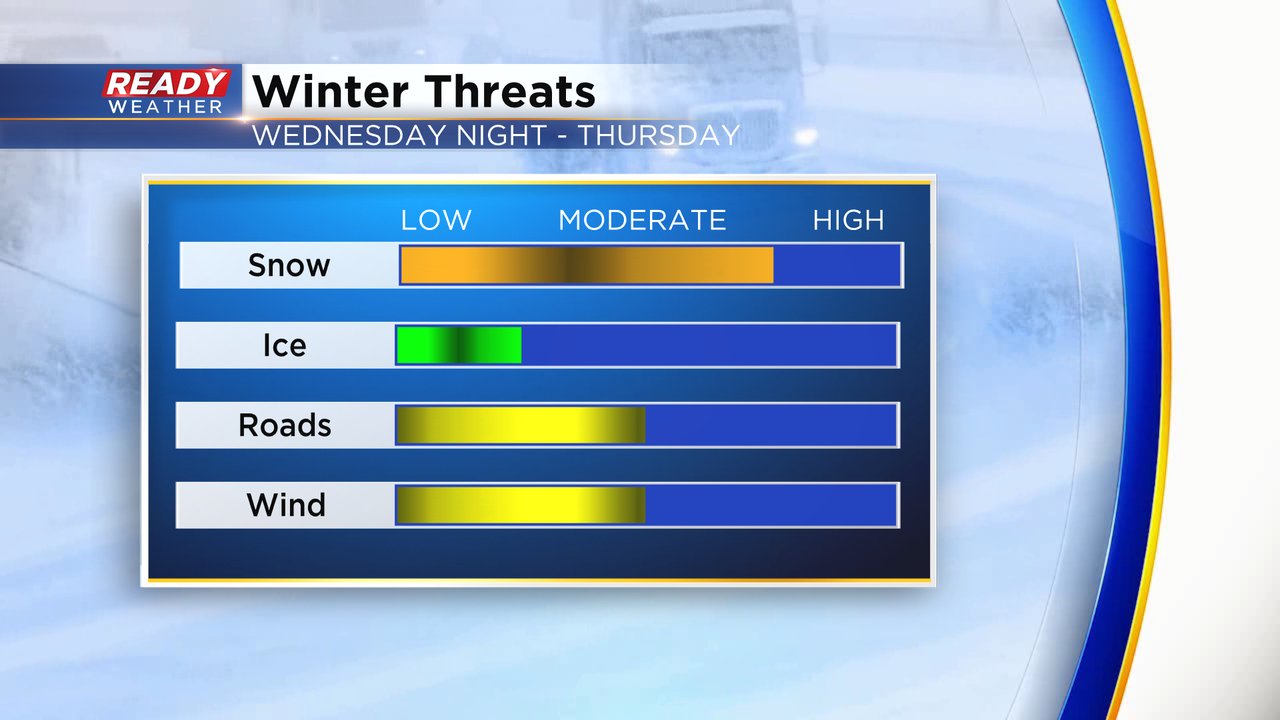 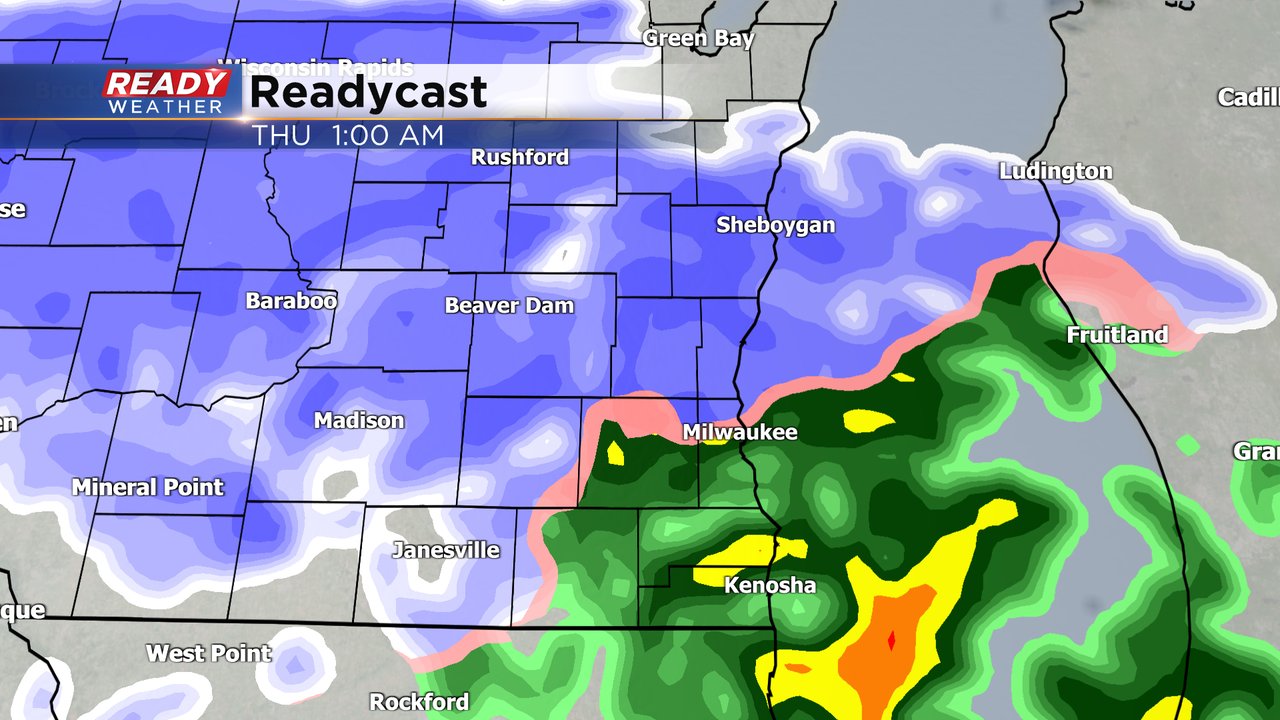 A winter weather advisory has been issued for our counties that are expected to pick up the most snow. Fond du Lac, Sheboygan, Dodge, Washington, Ozaukee and Jefferson Counties are under the advisory starting at 9 PM Wednesday evening until noon on Thursday. 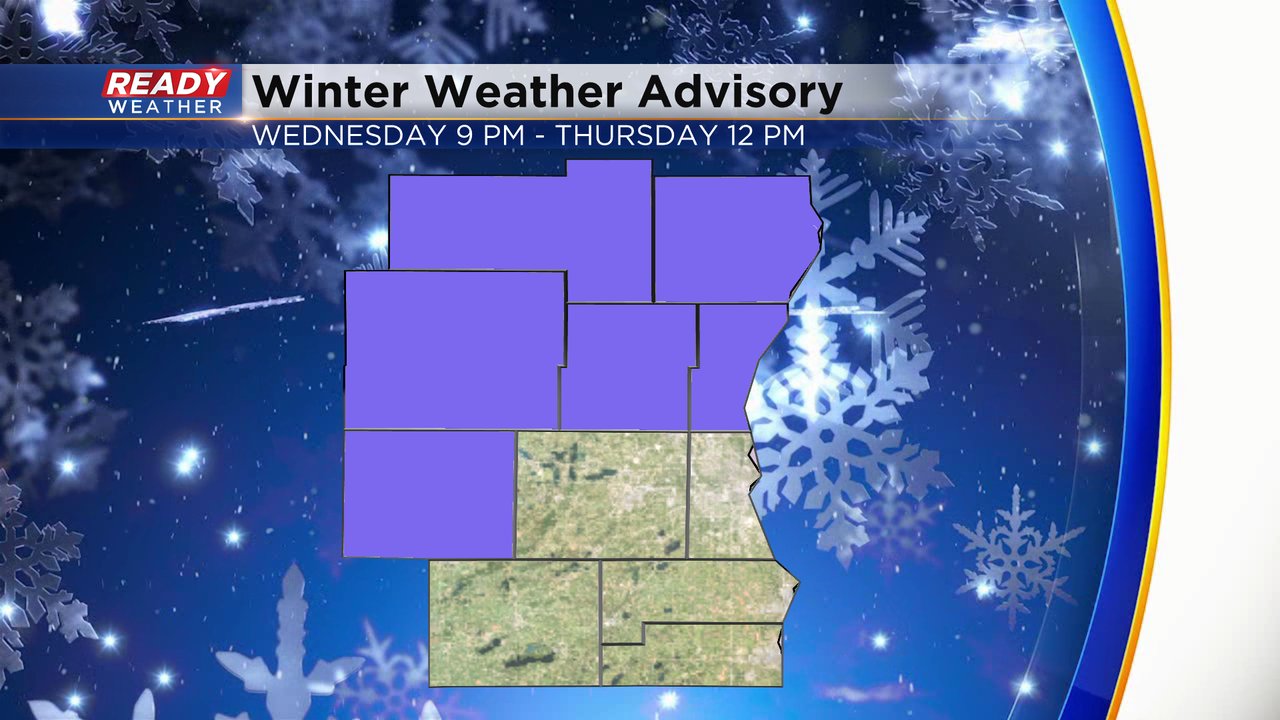 Even though Milwaukee, Waukesha and Walworth Counties are not included in the advisory, they likely see some light snow and mix. Racine and Kenosha Counties will have a harder time picking up much snow with mostly rain there. Snow totals will be the highest in northern counties where 3-5" of snow is expected. Parts of Ozaukee, Washington, Milwaukee, Waukesha, Walworth and Jefferson Counties are in the 1-3" range with less than an inch expected in southern Milwaukee/Waukesha Counties, eastern Walworth County and Racine and Kenosha Counties. 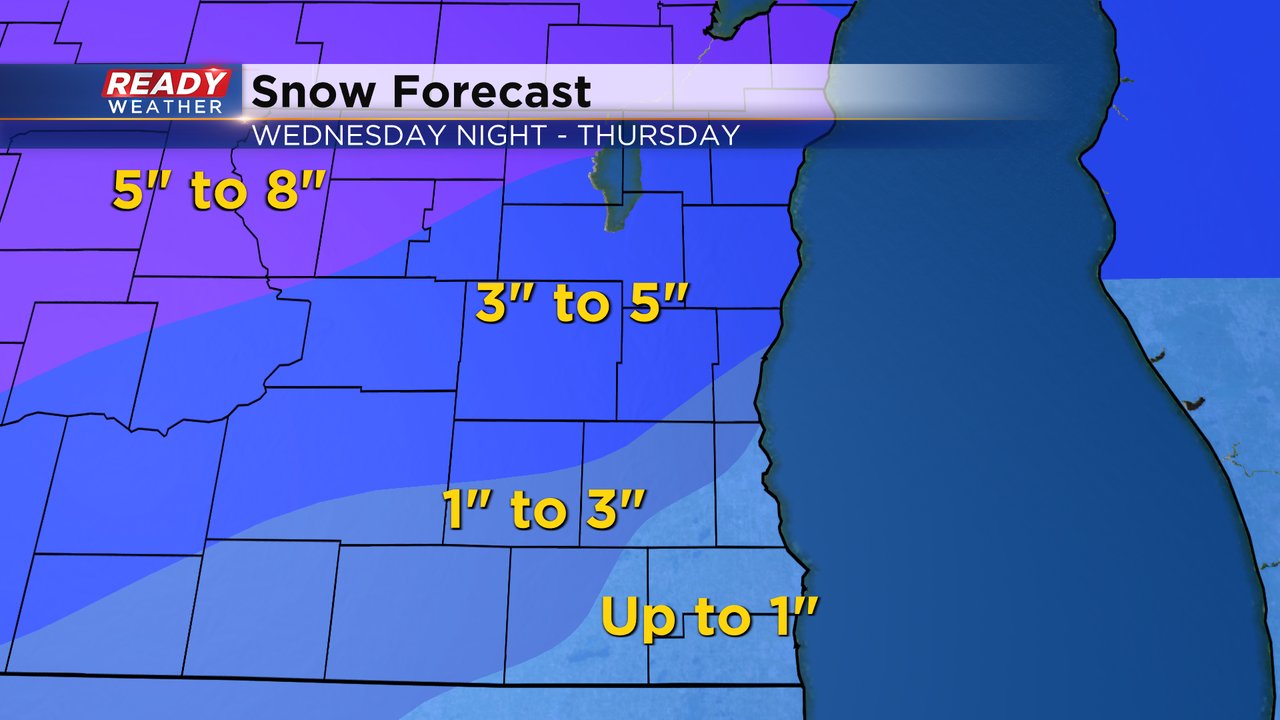 Download the CBS 58 Ready Weather app to track the mix and snow as it arrives.