How did Wisconsin dodge a red wave? Both parties weigh in

NOW: How did Wisconsin dodge a red wave? Both parties weigh in

MADISON Wis. (CBS 58) -- Now that Wisconsin's unofficial election results are tallied, both parties are weighing in on why they believe voters made a split decision to reelect Democratic Gov. Tony Evers and Republican Senator Ron Johnson.

The short answer - there were multiple factors to Republicans falling short of a red wave, retired GOP-strategist Brandon Scholz said.

Historically, the GOP playbook to winning statewide elections runs through the WOW counties (Waukesha, Ozaukee, Washington), but Republican governor candidate Tim Michels underperformed in all of them. Johnson dominated in all three areas and received 5,943 more votes in Waukesha compared to Michels. 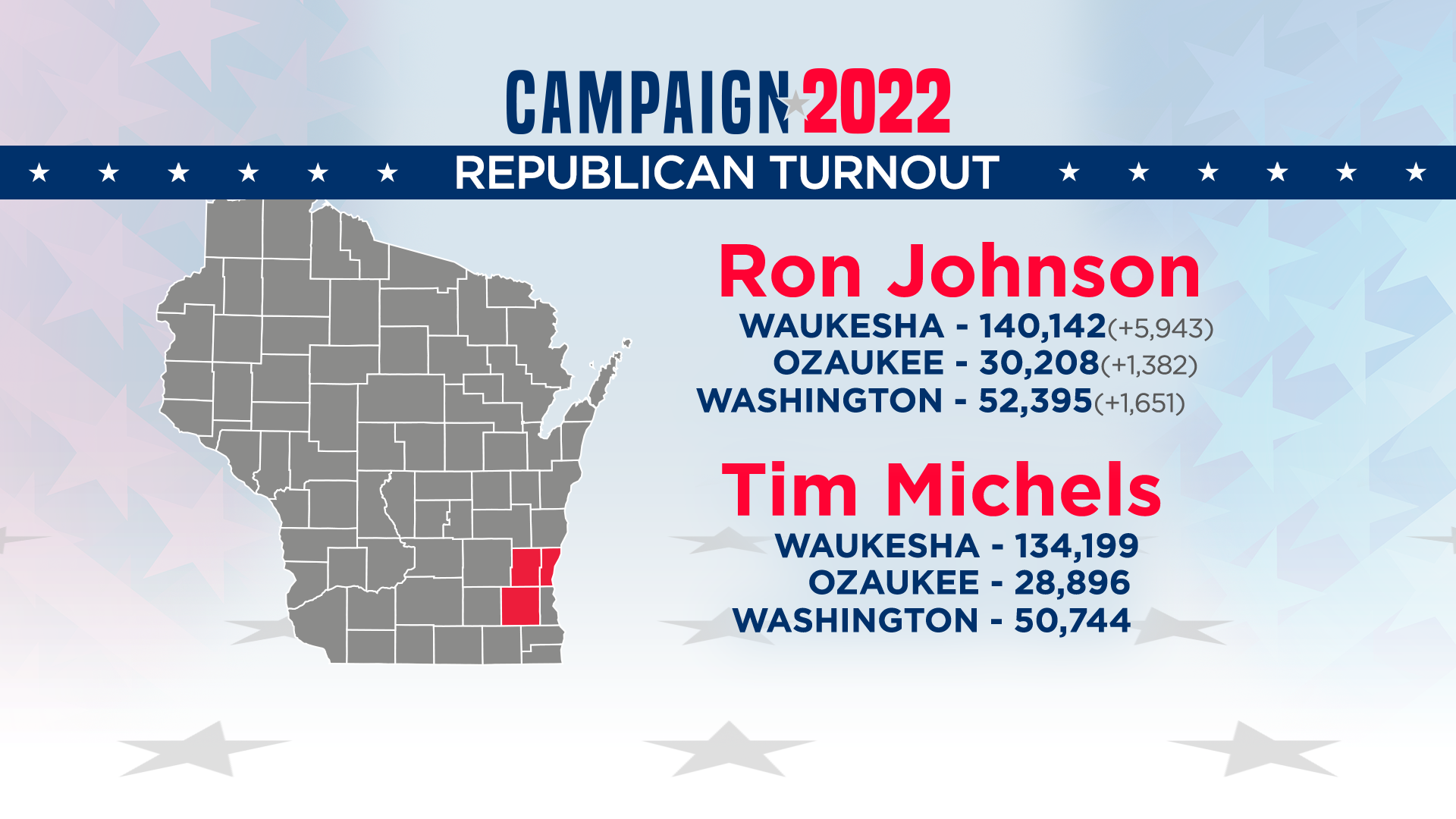 Scholz said the results indicate suburban moms still have a riff with former President Donald Trump, who endorsed Michels ahead of the primary.

"I think having Trump's support helped Michels win the primary, but not the general," Scholz said. "That Trump aura was around the Michels campaign and while they did try and push it off, it was still there."

Republicans also lost ground in Milwaukee and Madison, two Democratic strongholds that helped carry Evers to a victory -- yet it wasn't enough to elect Senate candidate Mandela Barnes. Low turnout in the City of Milwaukee could be the reason why. 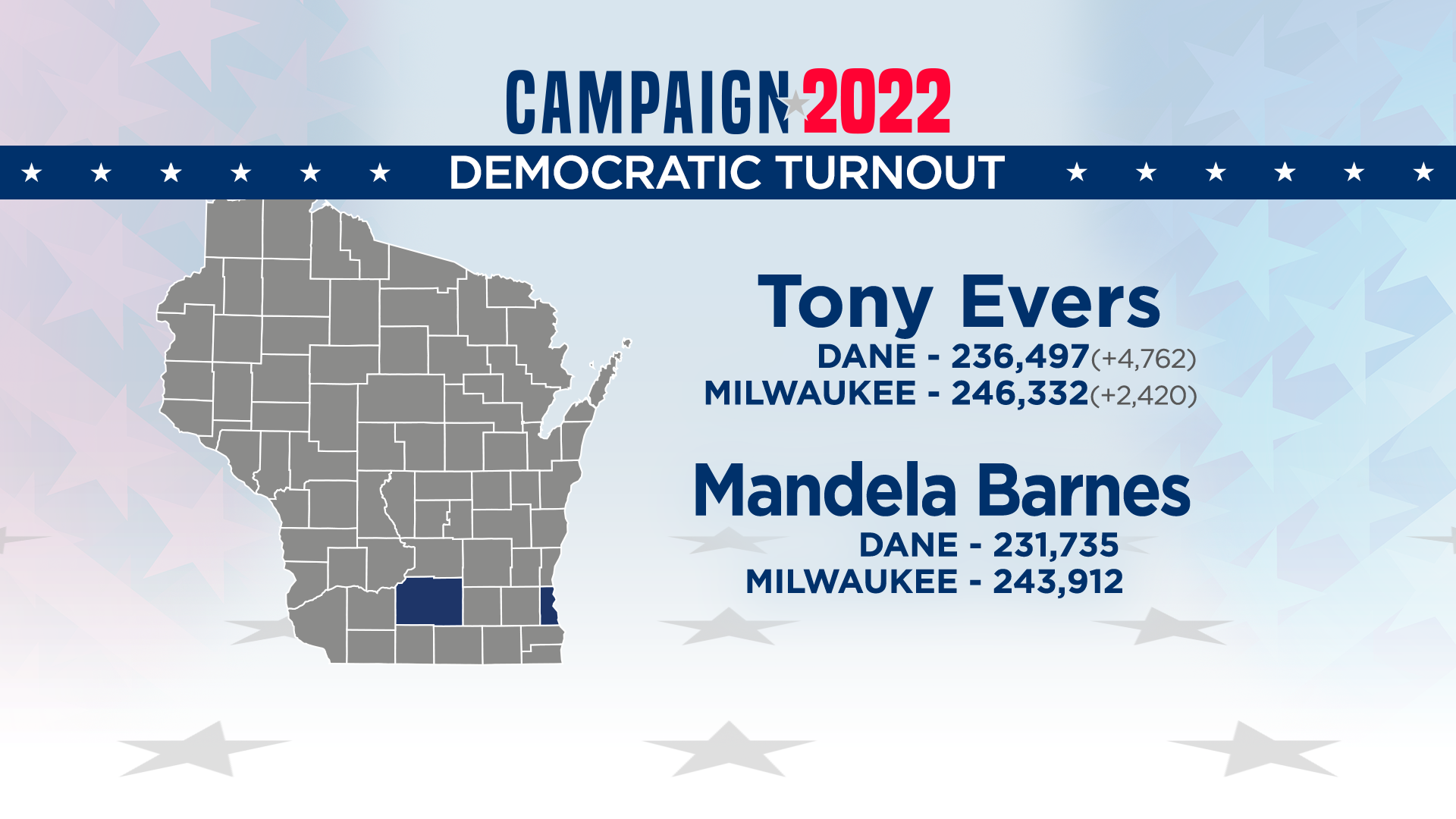 Milwaukee saw a decline in voter participation this year, a drop of about 40,000 votes compared to the 2018 midterm.

Democratic strategist Melissa Baldauff said a key to Barnes' loss was how Republicans were effectively able to tie him to Milwaukee's rise in crime.

"They ran these ads to make people think there are these dangerous young black men like Mandela Barnes and people who know him understand that's not who he is," Baldauff said. "I think Democrats can do a better job of telling the positive story about Milwaukee because we know there's a positive story."

Michels running as an "outsider" and going up against an incumbent who compares himself to “nice-guy Mr. Rogers” also played a role, according to Scholz.

"I don't think they attacked Evers as much as they should and their messaging was all about Michels, an outsider," Scholz said. "Evers defined Michels and I don't think Michels defined Evers enough, they were still working to define him."

Unifying the party after a divisive primary against former Lt. Governor Rebecca Kleefisch was another challenge for Michels, which Scholz adds is difficult for any challenger.

Republicans and Democrats agree - the ugly attack ads and millions of dollars pouring into the governor and senate contest were effective.

Evers outspent Michels 2 to 1. Johnson held a fundraising lead as well, but Barnes was able to catch up after reporting his campaign raised $20 million in the final weeks before the general election.

Baldauff, a former aide to Gov. Evers, said it was difficult for Barnes to overcome the string of attack ads on crime, police funding and tying him to progressive Democrats in Congress.

"Unfortunately, that's what happens when someone is outspent by nearly $30 million," Baldauff said. "Johnson's billionaire donors came to his rescue and spent a lot of money on his behalf on nasty attack ads."

Assembly Speaker Robin Vos, who fought off a Trump-backed primary challenger, said its proof negative advertising worked in the most expensive governor race in the nation this year.

"It's not surprising sometimes people believe the worst and I think that's really sad because Tim Michels had a good record that was totally distorted," Vos said. "We know negative advertising works."

Democrats successfully used the overturning of Roe v. Wade in their favor, but it was a tough issue for Republicans.

Michels initially said he supported Wisconsin's 1849 criminal abortion ban, which has no exceptions unless a mother's life is at risk. But then later changed his position, saying he would sign legislation to add exceptions for rape and incest.

Sholz said flipping on the issue and not revealing his support for exceptions soon in the race may have dissatisfied women voters.

Republican lawmakers fell short of gaining a veto-proof majority in the state legislature, granting Democrats another victory by preventing both chambers ability to bypass the governor and enact their own agenda.

Assembly Minority Leader Greta Neubauer said she was relieved to block Republicans from gaining a supermajority.

"Of course were disappointed to lose a couple of close races, but we also knew going into this our number one priority was preventing a Republican supermajority and we were successful," Neubauer said.

Assembly Speaker Robin Vos said he was pleased with the results despite falling short of what they needed to override the governor.

"We won three districts that were 50-50 seats, running on the same issues we know are important," Vos said. "That's controlling spending, taxes, education reform, crime, all those things that are important to us."