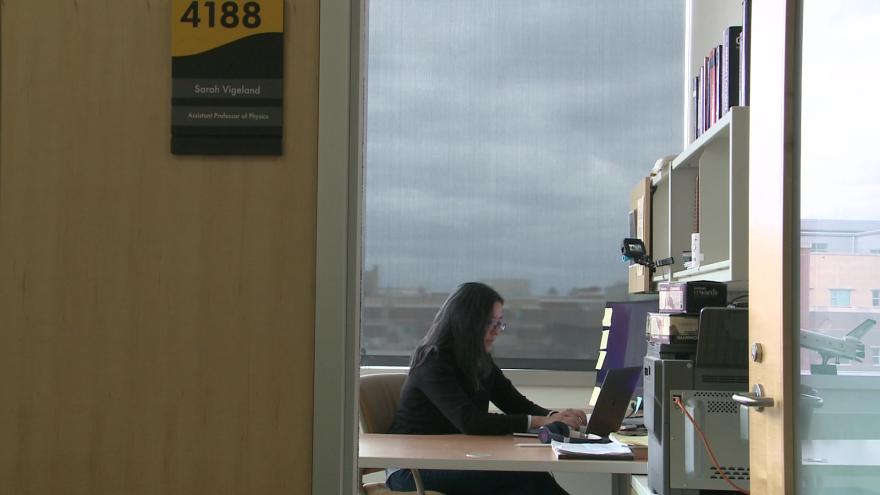 MILWAUKEE (CBS 58) -- On the campus of the University of Wisconsin-Milwaukee, out-of-this-world research is being conducted.

The campus is part of an international team of researchers and scientists conducting an experiment to detect and characterize low-frequency gravitational waves.

The experiment is part of a worldwide collaboration called the North American Nanohertz Observatory for Gravitational Waves (NANOGrav).

The National Science Foundation is renewing its $17 million grant for the project to be used over the next five years.

The purpose of the experiment is to answer fundamental questions about the universe.

"We are doing something that has never been done before," said Sarah Vigeland, Assistant professor of Physics at UWM.

The NANOgrav project is an international experiment, spanning two decades answering and forming questions about something we all know and love, gravity

"Gravitational waves are a really important prediction of general relativity, so it predicts that really massive objects will create these ripples in space and time," said Vigeland.

A key factor that helps with this experiment is looking at black holes.

"Black holes are really the most extreme objects in terms of gravity, and that’s why they are kind of scary, but kind of cool," said Vigeland.

Along with black holes, these Milwaukee scientists are gathering information about pulsars, essentially a dead star packed full of information.

These elements, black holes and pulsars, help form a bigger picture of our universe.

"We can study not just the stars and planets in our own galaxy but how galaxies form and evolve, throughout cosmic time," said Vigeland.

This work isn't done alone. Research and data is being gathered from all across the world. UWM works with roughly 40 other institutions to get closer to an answer.

"We primarily have been using two, the Green Bank Telescope in West Virginia, and Arecibo Observatory in Puerto Rico, although that telescope is no longer operational," said Vigeland.

The operation doesn’t stop there.

Vigeland goes on to say, "We also take data with the very large array in New Mexico and The Canadian Hydrogen Intensity Mapping Experiment (CHIME)."

Equally as exciting, some of the earth-shattering research is being done by scholars at UWM, some of whom thought a career in astronomy was science fiction.

"It didn’t seem like something, people can just go out and do, said Sparrow Roch an undergraduate senior at UWM, studying physics and computer science.

Roch is just one of the students working hand-in-hand with Vigeland, looking for the unknown.

"There's opportunity to ask lots of questions like, what does matter when it gets so dense, we think that it's made up of really packed neutrons, but we don’t know all the answers," said Roch

But it's the not-knowing that is half the fun for these scientists.

"Great to see things that you know are there, and that you expect to see, but it’s even more exciting to see something and wonder what that was, that was really weird," said Vigeland.

Vigeland goes on to say the research being done at UWM is putting Milwaukee on the map for innovative scientific discovery.

"One of the leading places in the world to study gravitational waves, I think people in Milwaukee should be very proud that we are contributing to science in this really important way," said Vigeland.

As for what's next, time, or should we say, science, can only tell.

More information on the NANOgrav project can be found here.