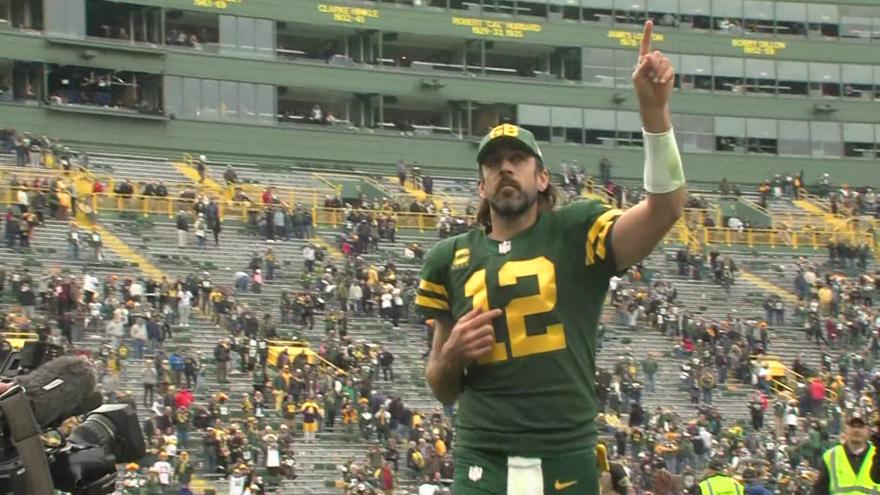 GREEN BAY, Wis. (CBS 58) -- Aaron Rodgers tweeted Tuesday, March 8, he will be back with the Green Bay Packers.

Hey everyone, just wanted to clear some things up; YES I will be playing with the @packers next year, however, reports about me signing a contract are inaccurate, as are the supposed terms of the contract I “signed”. I’m very excited to be back ?? #year18❤️

Pat McAfee broke the news earlier in the day.

BREAKING: According to my sources.. @AaronRodgers12 will officially be returning to the Green Bay Packers.

There is no deal in place currently but there is said to be a Cap Friendly deal on the way.

Retirement was a real consideration & in the end

? HE IS BACK WITH THE PACK pic.twitter.com/1lpdcLxyPL

.@AaronRodgers12 reached aht to me this morning & let me know that he will OFFICIALLY be returning to the Green Bay Packers#PMSLivepic.twitter.com/AZ54GJCSbj

According to a report from Ian Rapoport, the Packers and Rodgers have agreed to terms on a 4-year, $200M deal that makes him the highest player in NFL history.

The #Packers and MVP QB Aaron Rodgers have agreed to terms on a 4-year, $200M deal that makes him the highest paid player in NFL history, sources say. He gets a whopping $153M guaranteed and his cap number goes down. A monstrous commitment by GB for years to come. ? ? ?

From our breaking news coverage: #Packers QB Aaron Rodgers stays in Green Bay and will make $50M a year in new money. pic.twitter.com/Ud44n8uYIb

The 38-year-old QB has only gotten better with age winning back-to-back MVPs while leading the Packers to the playoffs in three straight seasons.

Rodgers has spent his entire career with the Packers after being drafted in 2005. After three seasons backing up Brett Favre, Rodgers got his first chance to start in 2008 and quickly turned into a superstar.

During the 2010 season the 10-time pro bowler led the Packers to his first and only Super Bowl title beating the Steelers 31-25. Rodgers finished the game 24/39, throwing for 304 yards, three touchdowns and zero interceptions and was named Super Bowl XLV MVP.

He followed the Super Bowl championship with his first regular season MVP honors in 2011 before winning the award three more times (2014, 2020 and 2021). That is the second most MVP awards in NFL history.