MILWAUKEE, Wis. (CBS 58) -- A beloved Bald Eagle in Bay View with symptoms of Avian Influenza had to be humanely euthanized on Saturday, April 9 by the Wisconsin Humane Society.

Wildlife rescue rehabilitators were called to a Bay View neighborhood Friday afternoon due to reports of a potentially injured or sick bald eagle in the front yard of a residence. 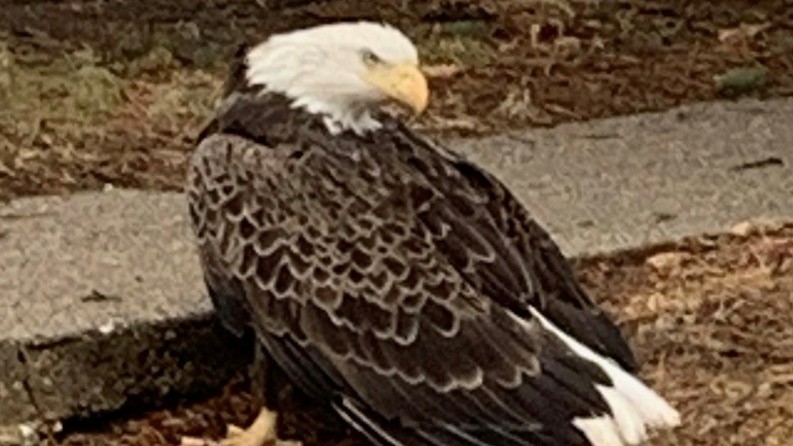 CBS 58 spoke with Tracey Blaszczyk, a Bay View resident who has been watching the eagle with her daughter for the last few weeks.

"We were watching the eagles for a little over a month now, there's a set of them, a male and a female and they were nesting," said Blaszczyk.

During their daily observations, Blaszczyk says her daughter saw the eagle had fallen from her nest.

"She saw the eagle sitting on the stairs, part of the neighbor's house. We started calling DNR, Humane Society."

"According to Wisconsin Humane society, "Since her admission, we’ve been providing supportive care, but despite our best efforts, her condition declined rapidly, and she showed significant neurological problems. We’ve been consulting with veterinary and disease experts since her arrival, and hoped to see signs of improvement today. Unfortunately, she had a severe seizure, went into acute respiratory distress, and could not be saved. She was humanely euthanized. Her symptoms were consistent with HPAI, the highly pathogenic avian influenza, although we can’t confirm that was the cause of her illness until test results come in, which will take several days. We know how passionately the Bay View community cared about the pair of bald eagles nesting in their neighborhood, and we cannot thank our whole community enough for your compassion. We appreciate the counsel from our consulting veterinarian, numerous medical specialists, and officials with the DNR, whom we have been working with closely on this highly transmissible virus. We are mourning the loss of this eagle alongside our community."

CBS 58 also spoke with Dr. Scott Ford, an Avian Specialist in Wisconsin about Avian Influenza. He says there are certain symptoms of the Avian Influenza to look for in birds.

"Nasal discharge, discharge from the eyes and they may breathe more labored and also neurological symptoms are a part of it which was I think the case with this bald eagle. For pet chicken owners, they may see a drop in egg production and perhaps diarrhea."

Ford has his own pet chickens and is concerned about how quickly the bird flu is spreading. Ford says pet chicken owners can contact their vet or USDA APHIS if they have concerns about their birds possibly having Avian Influenza.

"They picked up that Canada goose up in Milwaukee and now this bald eagle. I'm sure there will be others as well. It's pretty serious it's getting around."

The news left residents in Bay View distraught, upset that an animal so majestic could be taken from this world so quickly.

"They are so beautiful to watch. To see it become so sick and find out it passed away is so devastating. It's not very often we get a set of eagles in Milwaukee County, especially in someone's front yard," said one Bay View resident.

For now, the male eagle is alive. CBS 58 spotted the bird perched on a high branch of a tree about a block from where his female mate fell from their nest. Experts advise everyone to steer clear of any birds on the ground.

"Give them a wide birth and call the DNR and they'll respond to it just like they did with this bald eagle."

The Humane Society is testing the female eagle for the Avian flu. They expect to have those results in the next few days. Avian specialists say to stay at least 300 feet away.