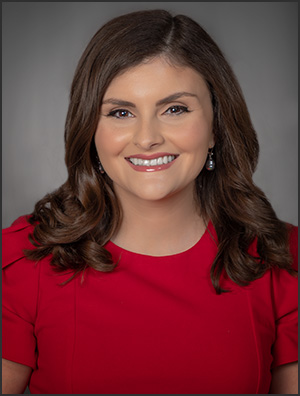 Alex joined the CBS 58 team as a reporter in November of 2021. She comes to Milwaukee from Nashville, Tennessee, where she worked diligently at WKRN as a breaking news anchor and reporter. In Nashville, Alex covered several large breaking news events, leading to an Emmy nomination. This includes devastating deadly flood waters, the Christmas Day bombing, and the COVID-19 pandemic.

Alex is also extremely passionate about social media. In June of 2021, she led her station's company nation-wide with 620K pageviews for continuing coverage of a Nashville hat store's controversial Instagram post.

Prior to being in Music City, she worked as a morning anchor, host, and reporter at WCIA in Champaign, Illinois. There, she fostered a true sense of community, growing the 9AM newscast to the number one newscast in the market during that time. Alex is passionate about storytelling and public speaking. She believes the most compelling stories are those that resonate with the community. Alex is also an animal advocate, providing several reports regarding the abuse of animals.

She graduated with honors from Illinois State University where she gained invaluable leadership experience. Alex is originally from the Chicago suburbs and grew up taking frequent family trips to Wisconsin. She's very excited to be back in the Midwest, so close to family and friends.

In her free time, Alex loves to travel, watch movies, go to sporting events, and spend time with her family. Alex is also a pun enthusiast, earning her the nickname "The Pun Queen." She is always ready for the next story idea and to immerse herself in the Milwaukee community.