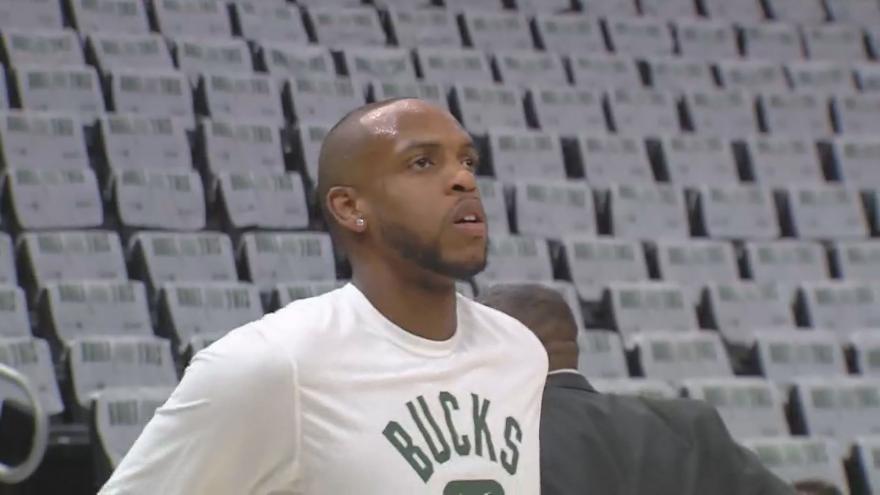 MILWAUKEE (CBS 58) -- Not only did the Milwaukee Bucks lose Game 2 to the Chicago Bulls, 114-110, but they also lost All-Star guard Khris Middleton.

With 7:30 to go in the fourth quarter, Middleton drove to the basket and slipped before passing the ball off to Brook Lopez for a basket.

"You could see that he was limping, limping, and limping. You're thinking like 'oh I hope this is not, hope this is not bad, hope this is not bad.' We need this guy," said Bucks forward Giannis Antetokounmpo who had a team-high 33 points with 18 rebounds and 9 assists in Game 2. "Then when he asked for a sub, you know that it's kinda bothering him. Because he's doesn't leave the game if he's not hurt."

Middleton left the game and did not return. Bucks Head Coach Mike Budenholzer revealed after the game that it was a MCL sprain on his left knee and he was scheduled for an MRI on Thursday, April 21.

The Bucks announced Middleton is out for Game 3. According to The Athletic, Shams Charania, he'll likely miss games 3 and 4.

"He's my brother no matter what. Like we need him to win. We're going to pray, I'm gonna pray for the best and hopefully its not too bad and he can join us soon because we need him," said Antetokounmpo. "Obviously, Khris is one of the best players on the team. If he's not able to be with us, it's going to be a tremendous loss for us."

"He's always been positive. He knows what type of team that we are and how resilient we are. We just want him to get back as quickly as possible and be healthy so he can come out here and help us win games," said Bucks guard Jrue Holiday.

The series shifts to Chicago for games 3 and 4. In last year's playoff run, the Bucks big three played in every game except for the two Giannis missed with a hyper extended knee in the Eastern Conference Finals.

"We still got a job to do, our goal is to win basketball games and get him back as fast as possible," said Bucks guard Wesley Matthews.

"Khris is down. But we have a great team, talented team. Tough team," said Antetokounmpo. "Hopefully we can go out there and compete at our highest level of our ability. If we thrive through adversity we'll see."

The Bucks made this statement Thursday evening regarding Middleton's injury:

"Milwaukee Bucks forward Khris Middleton left last night’s game vs. Chicago in the fourth period with a left knee injury. Middleton underwent an MRI and subsequent examination today by team physician Dr. William Raasch of the Froedtert & the Medical College of Wisconsin Health Network, which confirmed the diagnosis of a sprained left MCL. Middleton will receive daily treatment and evaluation with the next status update coming in approximately two weeks."