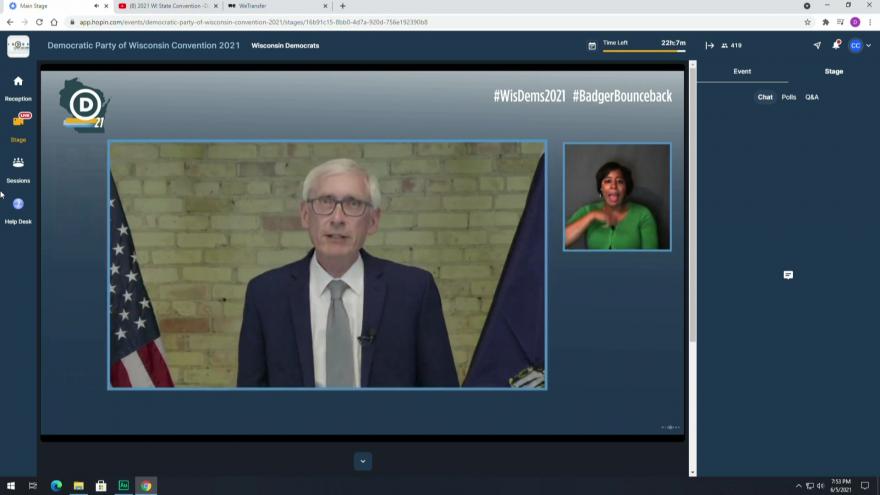 MADISON Wis (CBS 58) -- A key target of Democrats during their annual state convention was U.S. Senator Ron Johnson, who has yet to announce whether or not he will seek a third term.

Democrats focused on Johnson, who reiterated this week he’s undecided, for his baseless claims of election fraud and repeatedly downplaying the severity of the pandemic.

“We need to send Ron Johnson back to whatever planet he came from,” said U.S. Rep. Mark Pocan. “Look, it is embarrassing to have American’s most clueless Senator.”

Pocan also gave a message to candidates running for Johnson Senate seat to keep the race focused on the issues instead of personal attacks.

“The person we are trying to beat is Ron Johnson, not each other,” Pocan said.

Gov. Tony Evers, who officially announced his re-election bid on the virtual stage, also took aim at Johnson saying, “We’ve got bags to pack for Ron.”

Evers and other top Democrats also spoke about their recent victories in 2020 from winning April's State Supreme Court Race and November's presidential election. Many Democrats spoke about the challenge ahead to carry that momentum into 2022 as they no longer are targeting former President Donald Trump, a key figure who helped generate voter turnout.

“We need to keep being prepared for what’s at stake this year,” said Democratic Attorney General Josh Kaul.

Another common theme was discussing Republican attempts to change election laws which Democrats say make it more difficult for people to vote.

“They are operating under a philosophy that if they can’t beat us, they will cheat us,” said U.S Rep. Ron Kind. “That’s why you're seeing all the voter suppression bills popping up across the county based on that big lie -- that last year's election was based on fraud.”

President Joe Biden also made tapped remarks at the convention thanking supporters that helped his victory to the White House.

“You showed the world what America is really made of, standing up against the politics of division and politics of hate,” Biden said.