Sheboygan, Dodge, and Fond du Lac counties have been added to the Winter Weather Advisory that runs through Noon Sunday. 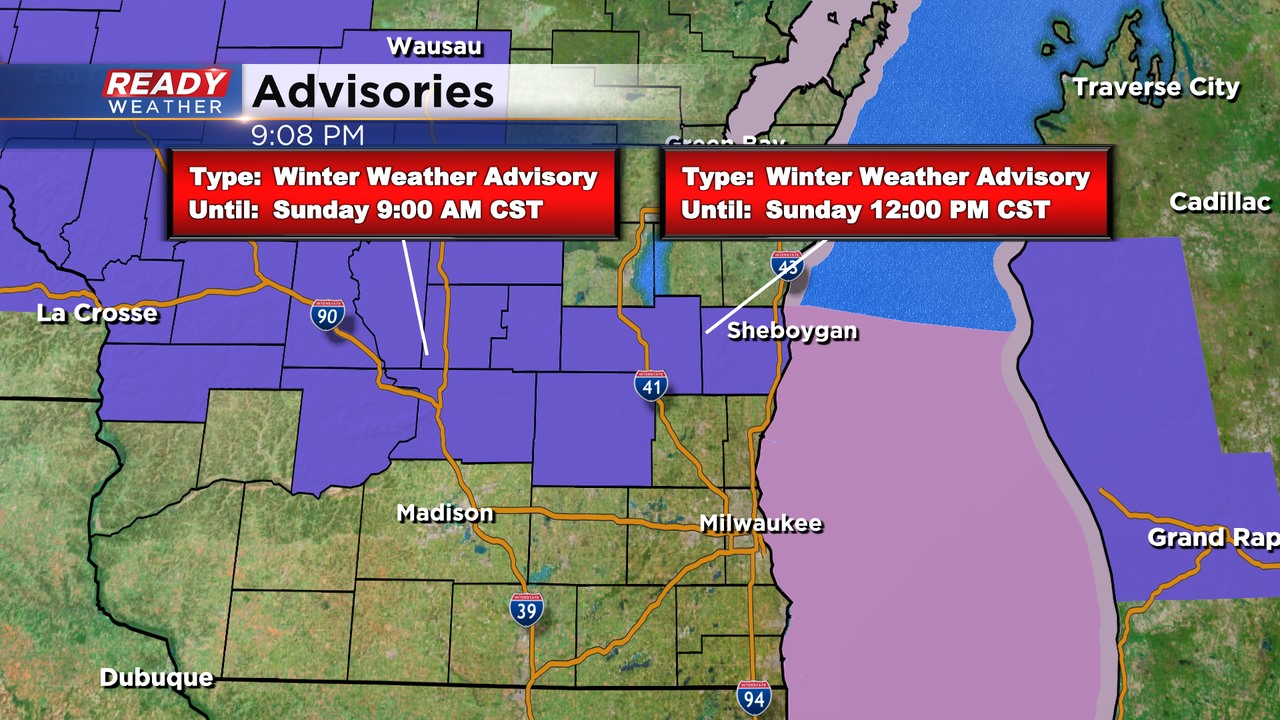 These counties have the best shot at 2-3" of snow and slippery roads. 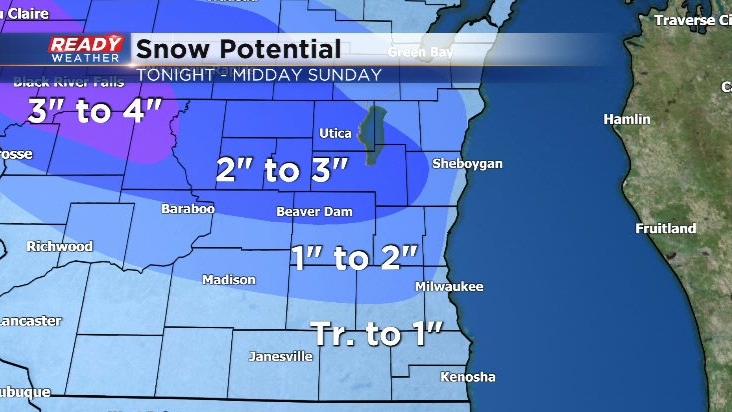 Snow will remain a bit more steady in these locations while far southeast Wisconsin experiences some dry time and a rain/snow mix late tonight, which will cut into snow totals.

The first batch of snow is beginning to move into southeast Wisconsin and will push through between now and midnight. Expect visibility to be reduced to a mile or less at times, but accumulation will be limited to a coating on grassy and elevated surfaces. Roads will be wet as road temps are in the mid to upper 30s. 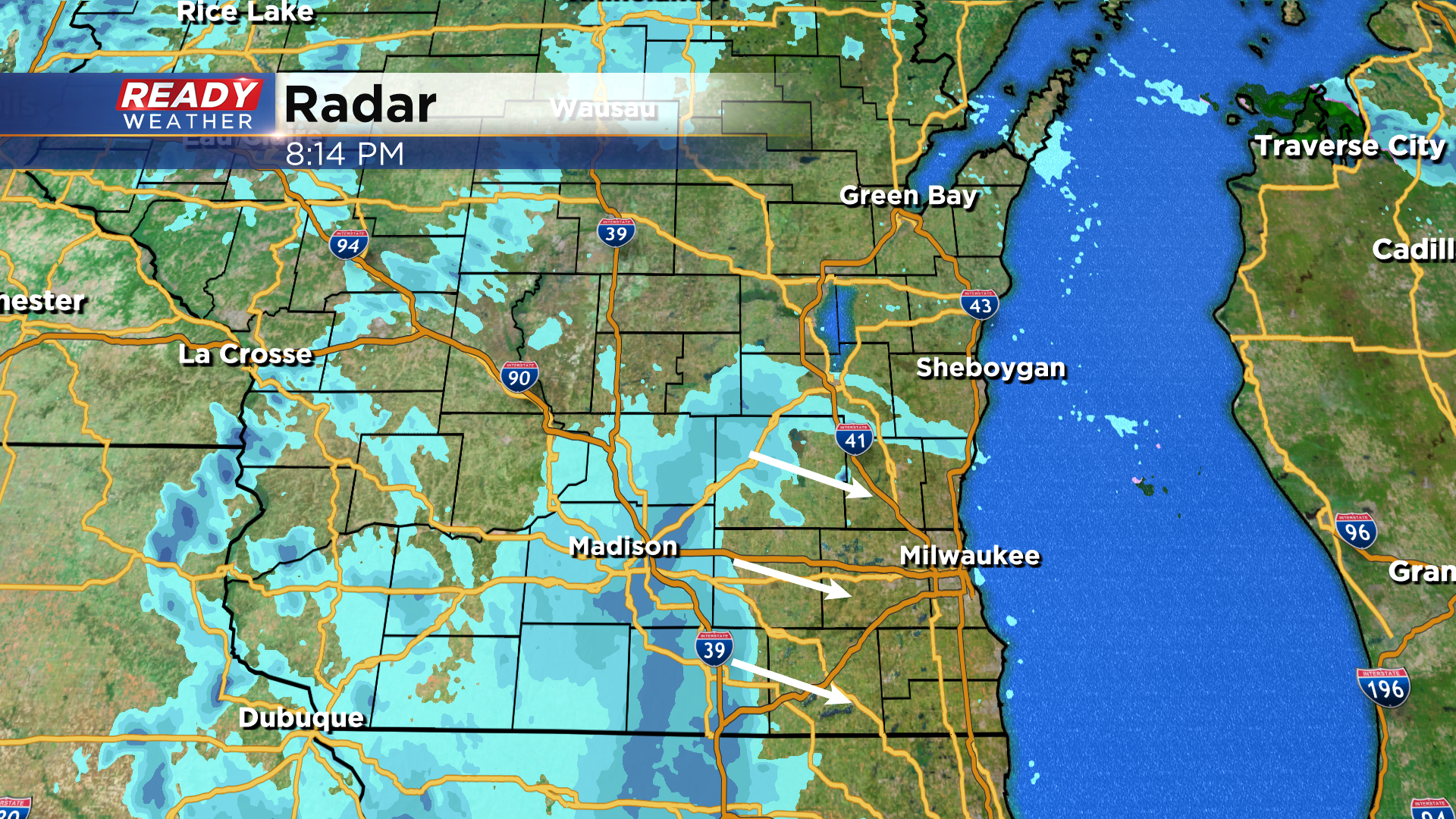 After this snow exits around midnight, parts of far southeast WI will be in a dry slot at times overnight while snow continues north. The most widespread area of mix to snow is still on track for Sunday AM, which is when most of the accumulation will occur. 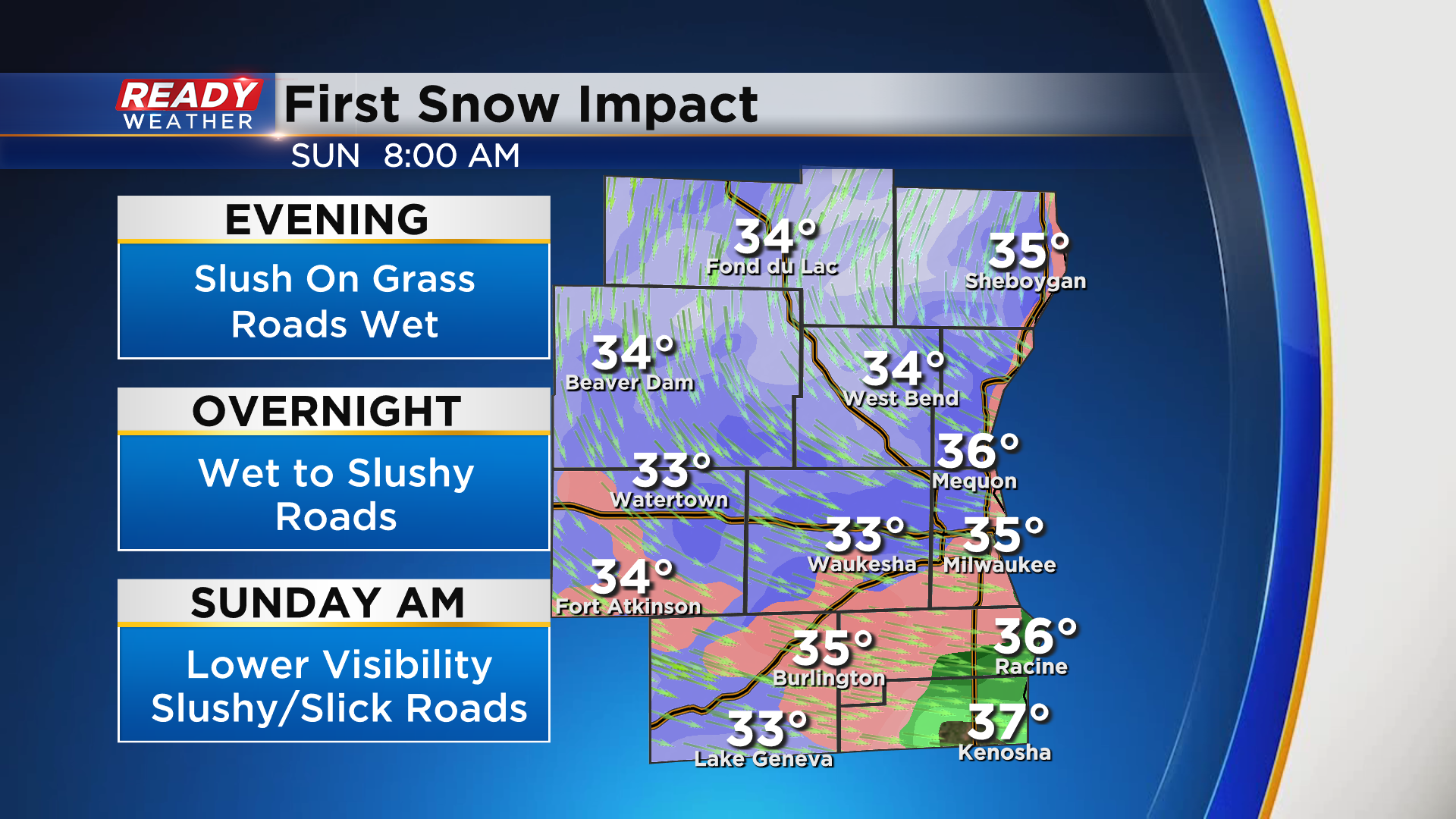 Roads northwest of the metro will become slushy overnight as snow continues, while most of SE WI will experience slushy to slippery roads throughout Sunday morning.

After some sunshine this morning clouds have thickened up this afternoon head of the clipper system on track to move through the state tonight into Sunday. The leading edge of snow is moving through Minnesota this afternoon and will reach southeast Wisconsin between 8-11pm. This initial round of snow will likely make roads wet with a dusting possible on grassy and elevated surfaces. 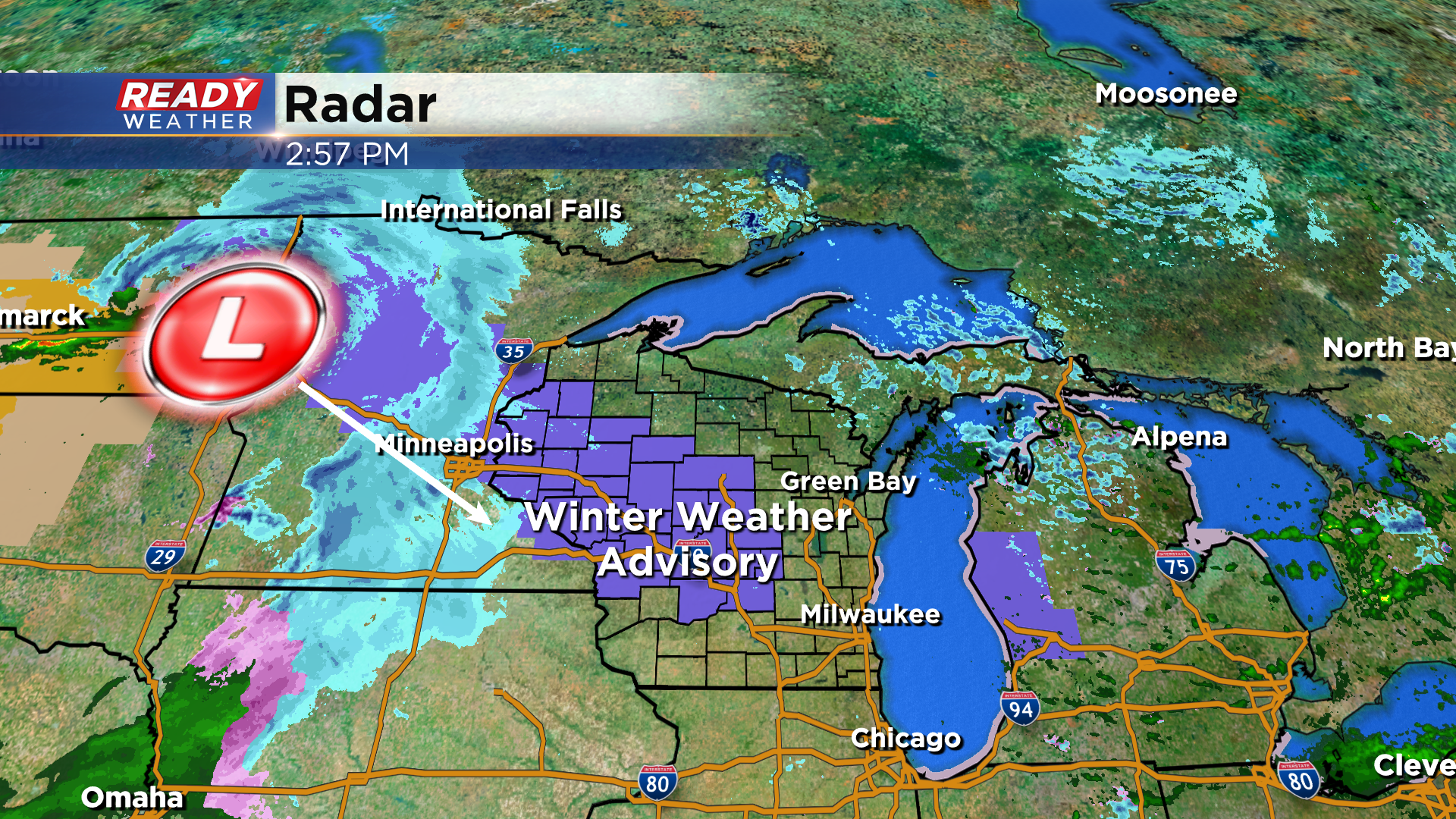 After the initial band of snow moves through, there may be a lull in the action for areas south of I-94 as the low moves near La Crosse. This track would keep areas south of I-94 a few degrees warmer, allowing for rain to mix with the snow overnight into early Sunday morning. 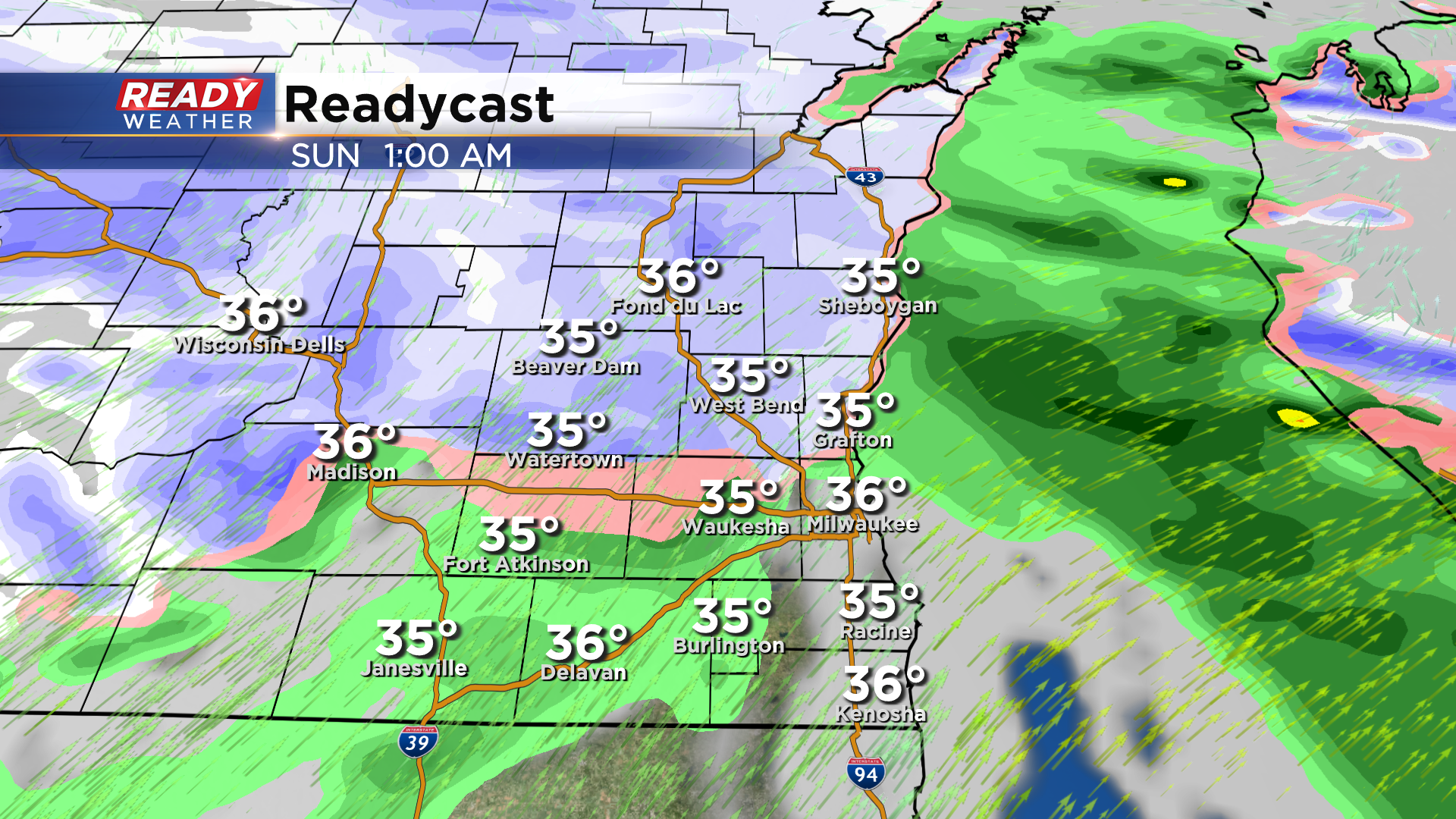 Areas well northwest of Milwaukee may not see a break in the snow overnight. The low pressure itself looks to track across southeast Wisconsin shortly after sunrise. This will keep a rain/snow mix in play for far southeast Wisconsin until the colder air wraps in after 8 am. 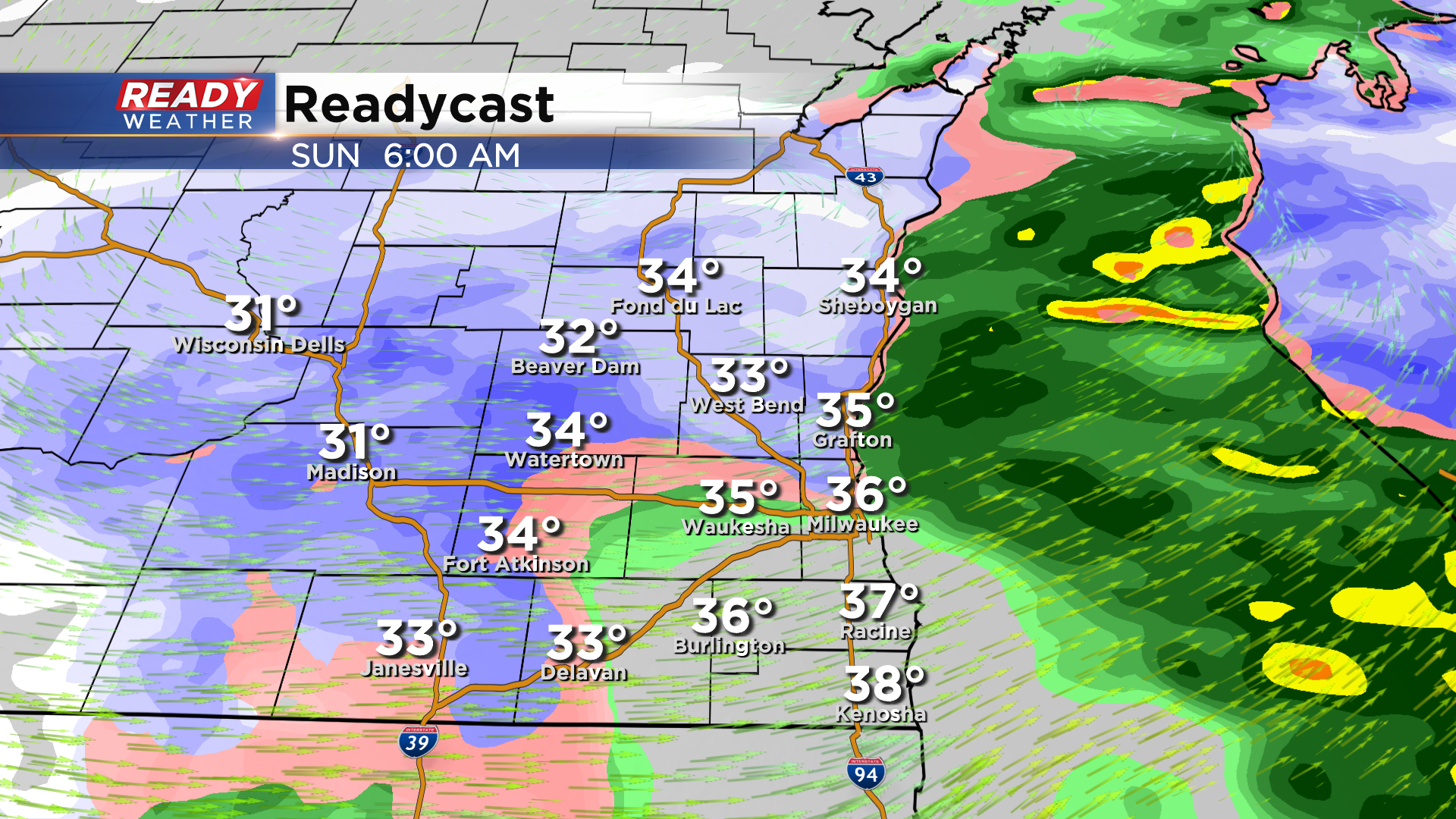 This will change the precipitation to all snow by mid morning, with the accumulating snow coming to an end by midday. 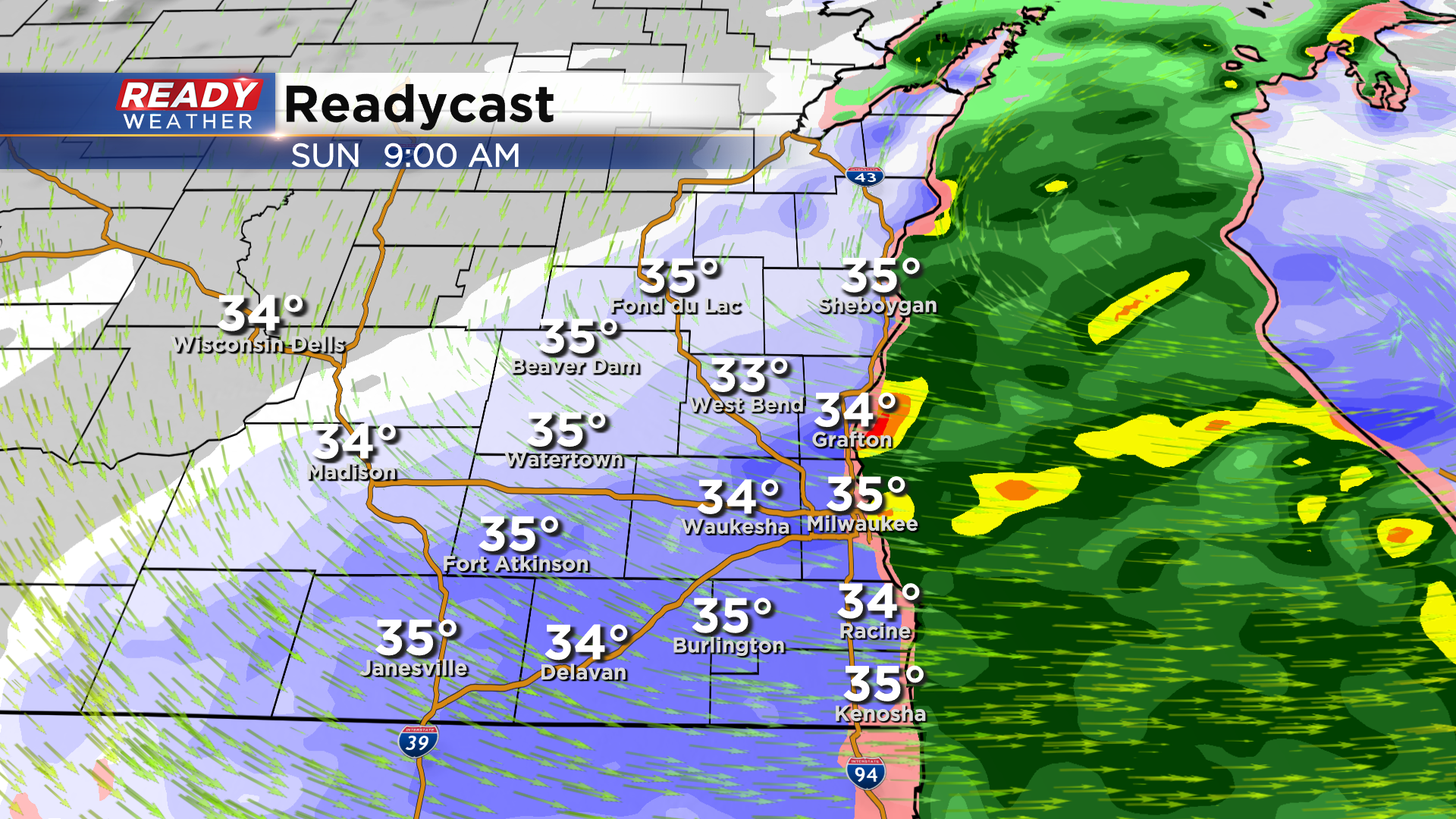 A few isolated snow showers may linger into early afternoon, but by then the bigger story will be the strong northwest winds gusting around 30-35 mph. 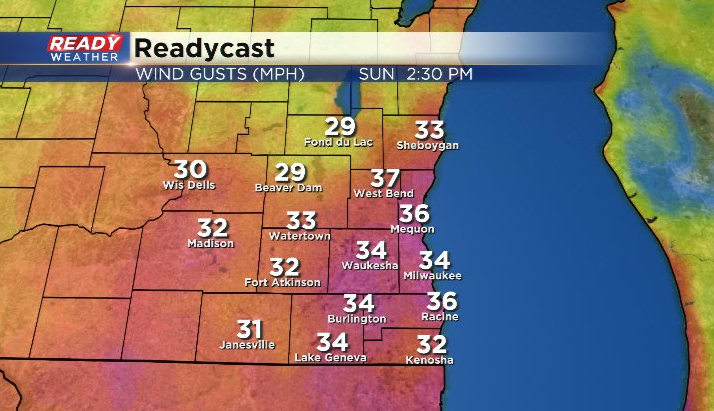 Most areas north of I-94 and away from the lakeshore will pick up 1-2" of snow, with isolated higher amounts near Beaver Dam and Fond du Lac. With warmer temps and more rain mixing in, totals of a coating to up to 1" are expected lakeside and south of I-94. 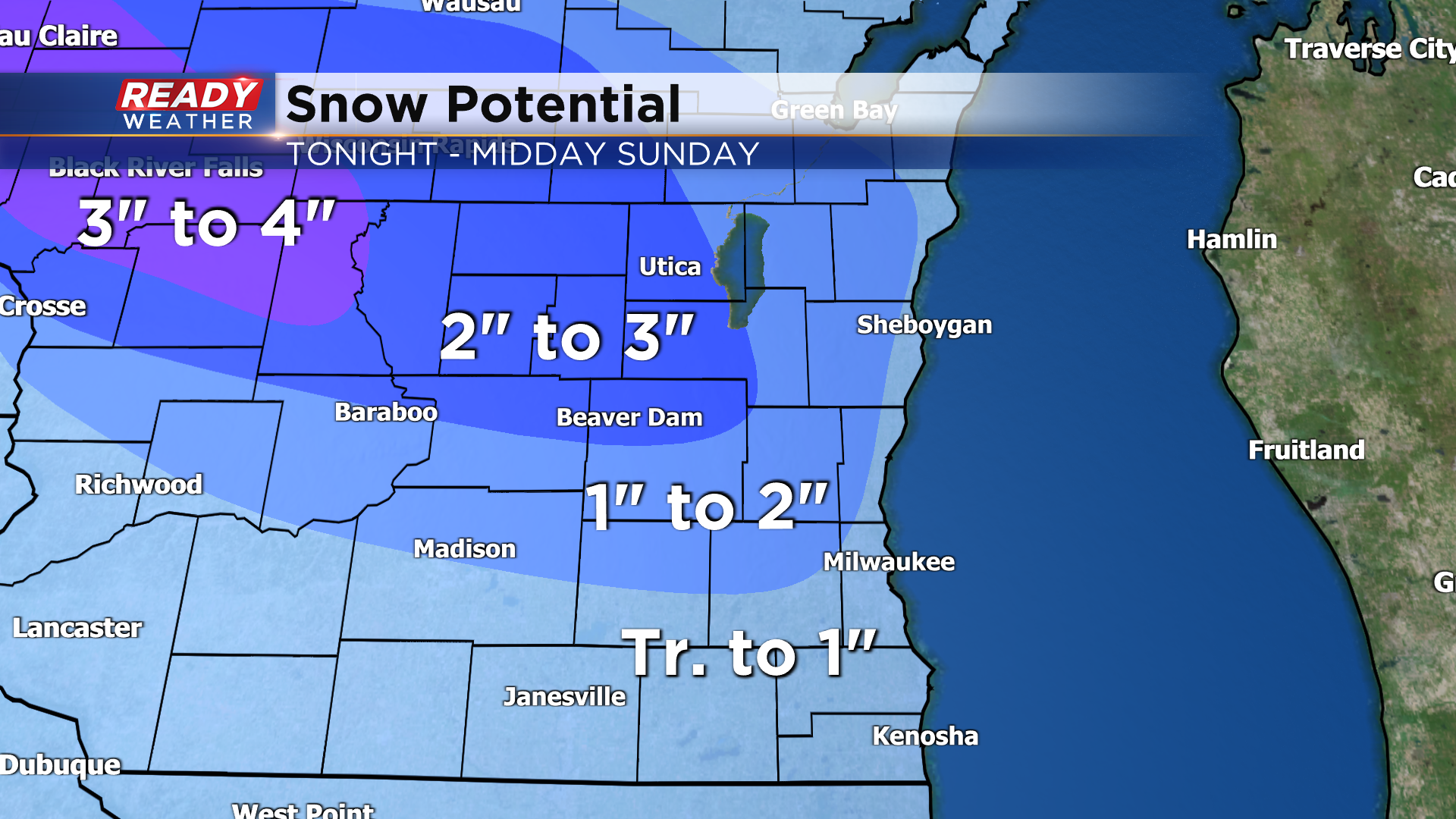 Being the first accumulating snow of the season, there will likely be issues on the roads late tonight through Sunday morning. Visibility will be the worst during the morning hours on Sunday. 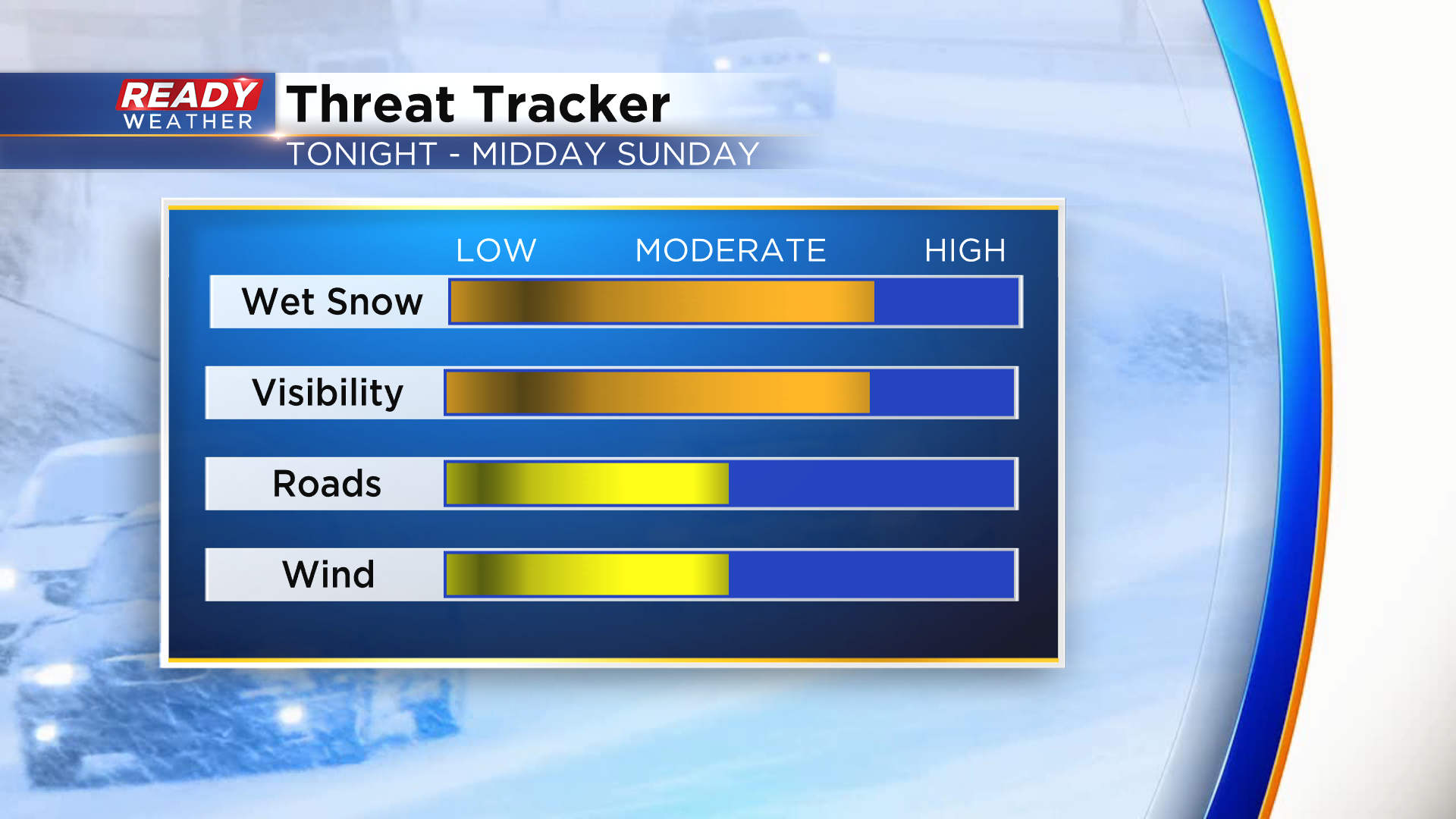 Give yourself extra time to travel Sunday morning, take it slower, and leave plenty of room for those in front of you. Download the CBS 58 Ready Weather App to keep track of the wintry weather.

MILWAUKEE (CBS 58)--We don't normally see our first inch of snow until early December.  But it looks like Mother Nature will move up the date this year at least for some of us.  An Alberta Clipper system will give us snow late Saturday night through much of Sunday morning. leaving us with a few slushy inches of snow, especially away from the lake and north of I-94.  Elsewhere a third to a half inch of snow could fall. Keep in mind more of a wintry mix will lower the amounts. Watch for slick spots, especially on bridges and overpasses.

Once the system clears, it'll stay quiet for most of the week.  Another front could give us a few showers by Wednesday.  It'll be milder then with readings in the 50s for highs but then another cool down will follow. 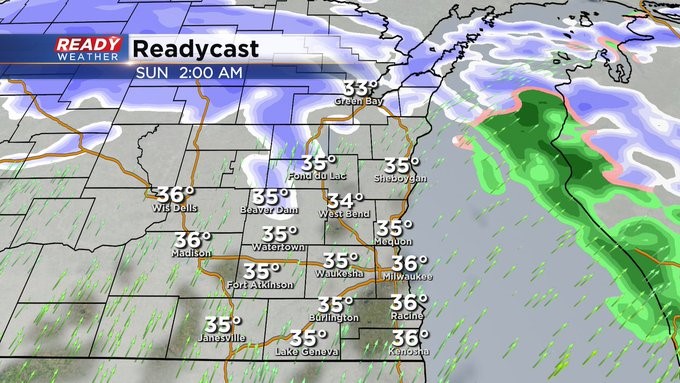 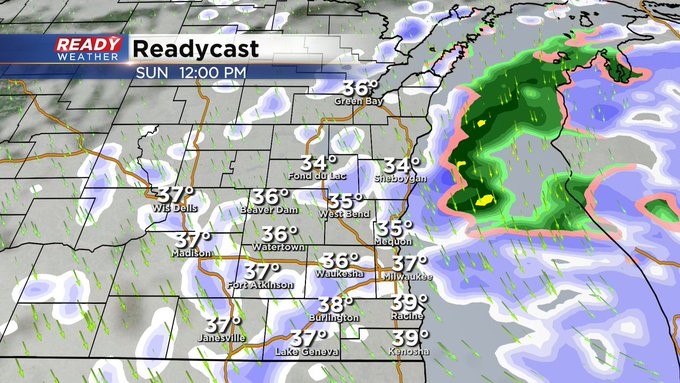 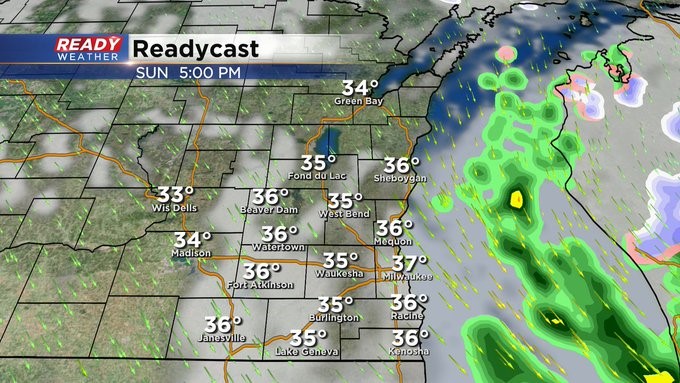 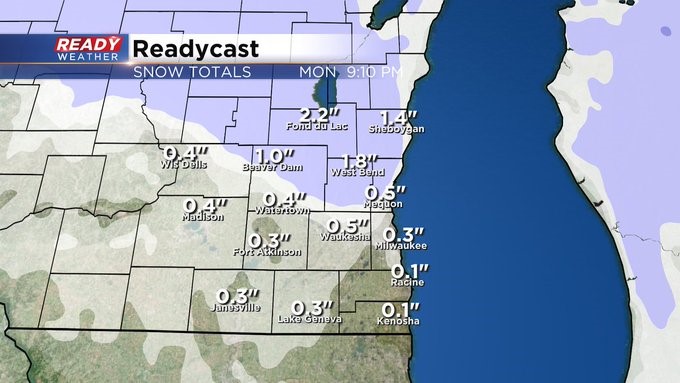 Stay tuned to CBS 58 for the latest developments with this system throughout Saturday.