According to Sheriff Earnell Lucas, the deputy attempted to stop a vehicle without registration near 68th and W. Adler around 2 a.m.  As the deputy called for backup, the driver and passenger of the vehicle fled the scene on foot.

A short time later, the driver was taken into custody near the ramp of I-94 and 68th St.

The West Allis Police Department assisted in the search for the second subject. According to the sheriff, officers witnessed the passenger climbing out of a garbage bin, and he fled into the neighborhood.

After the passenger fled for a second time, an emergency alert was issued ordering people to stay in place.

The alert described the suspect as a Black male with a skinny build, possibly wearing a black t-shirt and no coat. It said he was armed and dangerous. 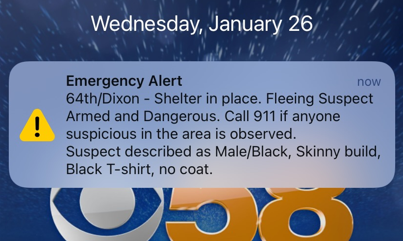 Deputies eventually encountered a man hiding behind cars in the area of 60th and Main, blocks away from the initial traffic stop. That subject shot himself, and died from his gunshot wound.

Initially, deputies were unsure if the subject was the suspect they were looking for. MCSO has since released a statement that states the initial investigation shows that the man who died from a self-inflicted gunshot wound was the suspect.

The shelter in place order was lifted around 11 a.m.

UPDATE: SHELTER-IN-PLACE NOTICE LIFTED
The shelter-in-place notice impacting the area of S. 64th St. and W. Dixon St. is no longer in effect. Further details are forthcoming regarding the incident in which a deputy sheriff was wounded in the line of duty.

The deputy shot is a 26-year-old man who has been with the MCSO for 18 months.

He was shot in the arm and torso, and at this time his injuries do not appear to be life-threatening.

Just two weeks ago, an off-duty Milwaukee police detective was shot trying to stop an armed robbery in the Third Ward.

"I just think this is something that has to stop," Andrew Wagner said. He is the president of the Milwaukee Police Association.

Wagner is still processing the incident. He says officers and deputies take risks every day and they run into people who have no regard for others.

"We know most of the community out there is supportive and protective of us, but there's some really bad apples out there right now that feel like they can get away with crimes, and they don't have to answer for those crimes, and they're trying to get away however possible and unfortunately, that's by shooting police officers," Wagner said.

He says their police officers are already overburdened. Shootings involving one of their own add an extra layer of stress.

He's optimistic and he says officers and deputies will continue to do their best to serve and protect.

"Hopefully this shows the community that we are trying to do our best that we do out there. We face a lot of unknowns. I know that the officer and the deputy were all supplied with bulletproof vests and that may have played a role in today saving his life."

The MCSO is still asking residents who witnessed any suspicious activity, or anyone with information regarding the incident, to contact the Milwaukee Police Department.

The Milwaukee Police Department is handling the investigation, as is protocol with shootings involving an officer.

Contributions to this story also made by: Winnie Dortch
Share this article: