9 PM Update: Snow ending for many locations but lingers within the advisory.

9 PM Update: Snow ending for many locations but lingers within the advisory. 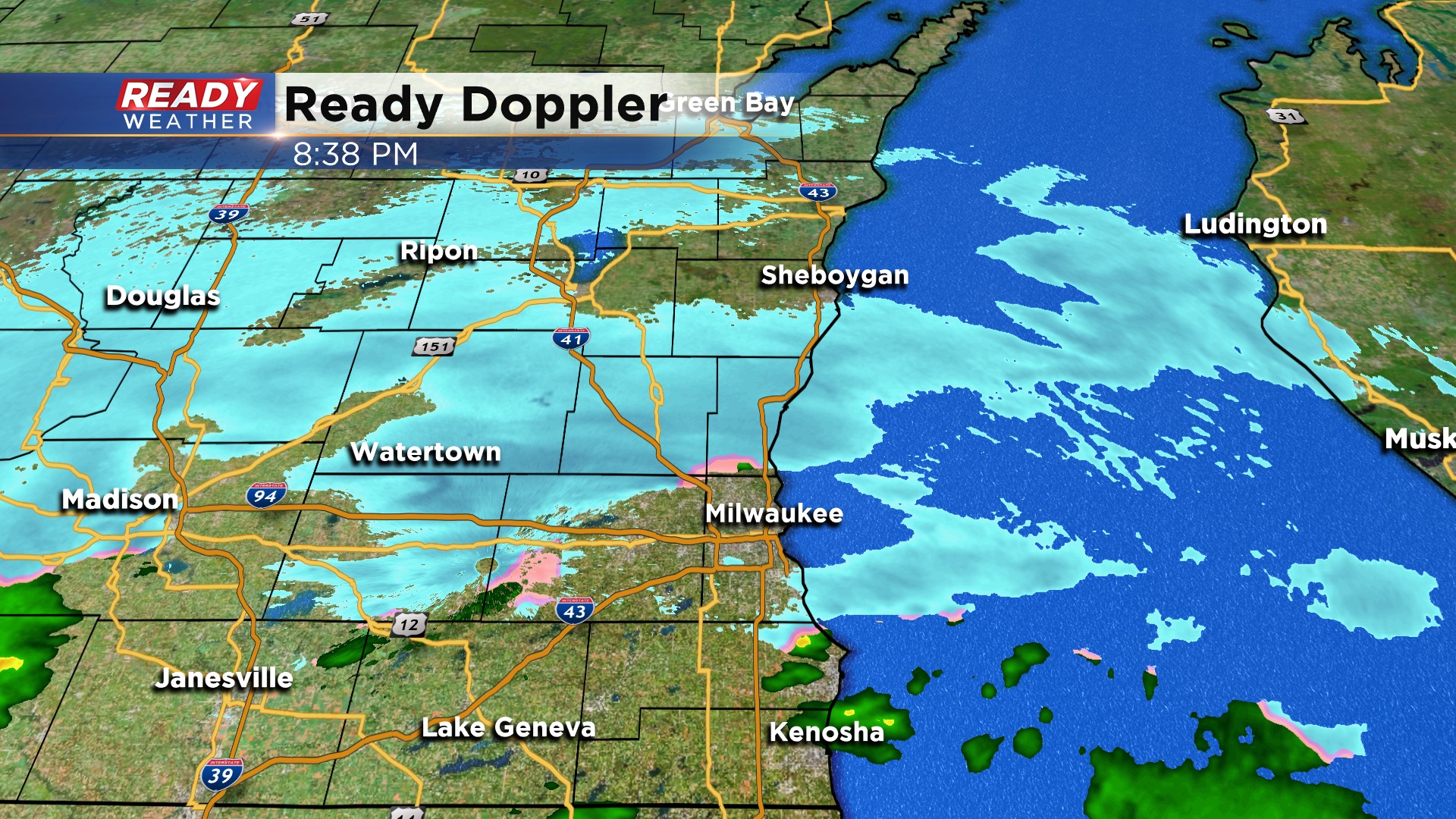 Most of the snow has wrapped up along and south of I-94.  Some drizzle remains as dry air moves in from the southwest.  Light to moderate snow continues to fall across the advisory counties.  Roads are slushy tonight. 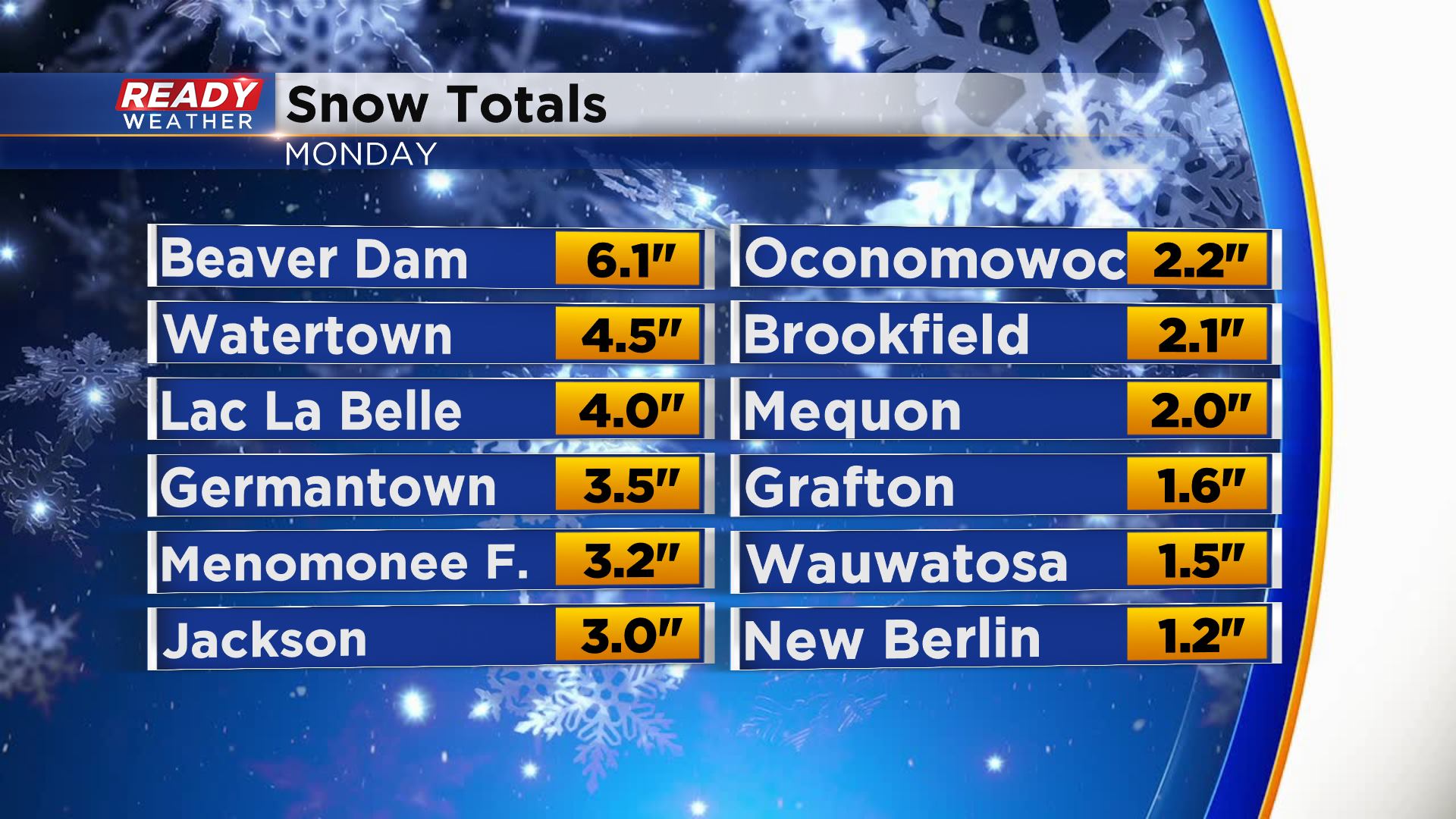 Snow will continue to wrap up over the next couple of hours and move out after midnight.  An additional inch is possible within the advisory. 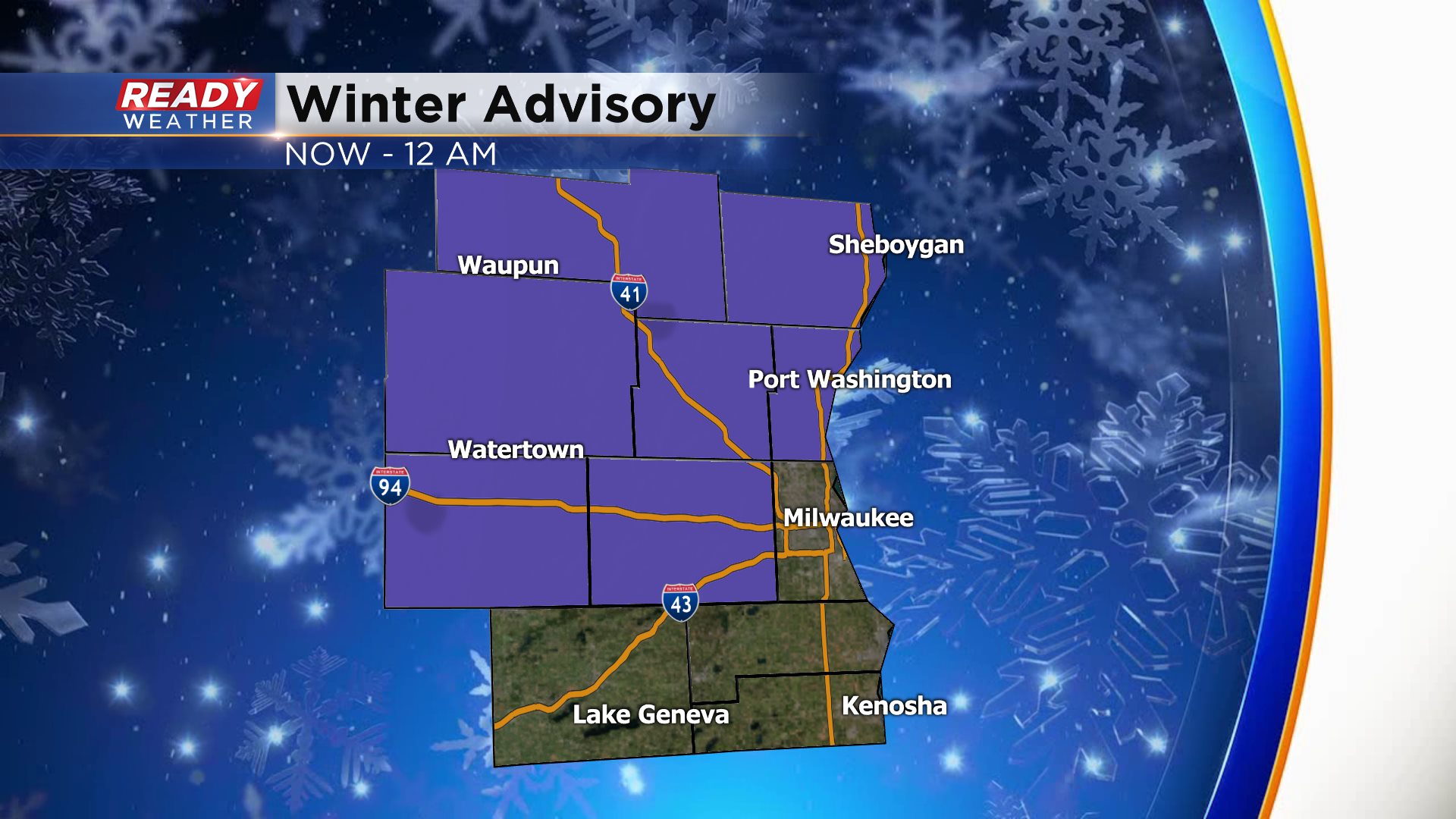 Heavy snow has created more travel issues west of the metro area for the commute.  Jefferson, Dodge, Washington, Waukesha, and Ozaukee counties have been added.  Many counties in the advisory have already picked up 2" to 4".  An additional 1" to 3" is possible within the advisory before it ends around Midnight.

Areas south of 94 will start to mix over the next several hours as warmer air moves in from the southwest.  Counties outside of the advisory will see less than an inch of additional accumulation.

Once the precipitation wraps up some light freezing drizzle is possible.

We are not expecting precipitation for the morning commute. 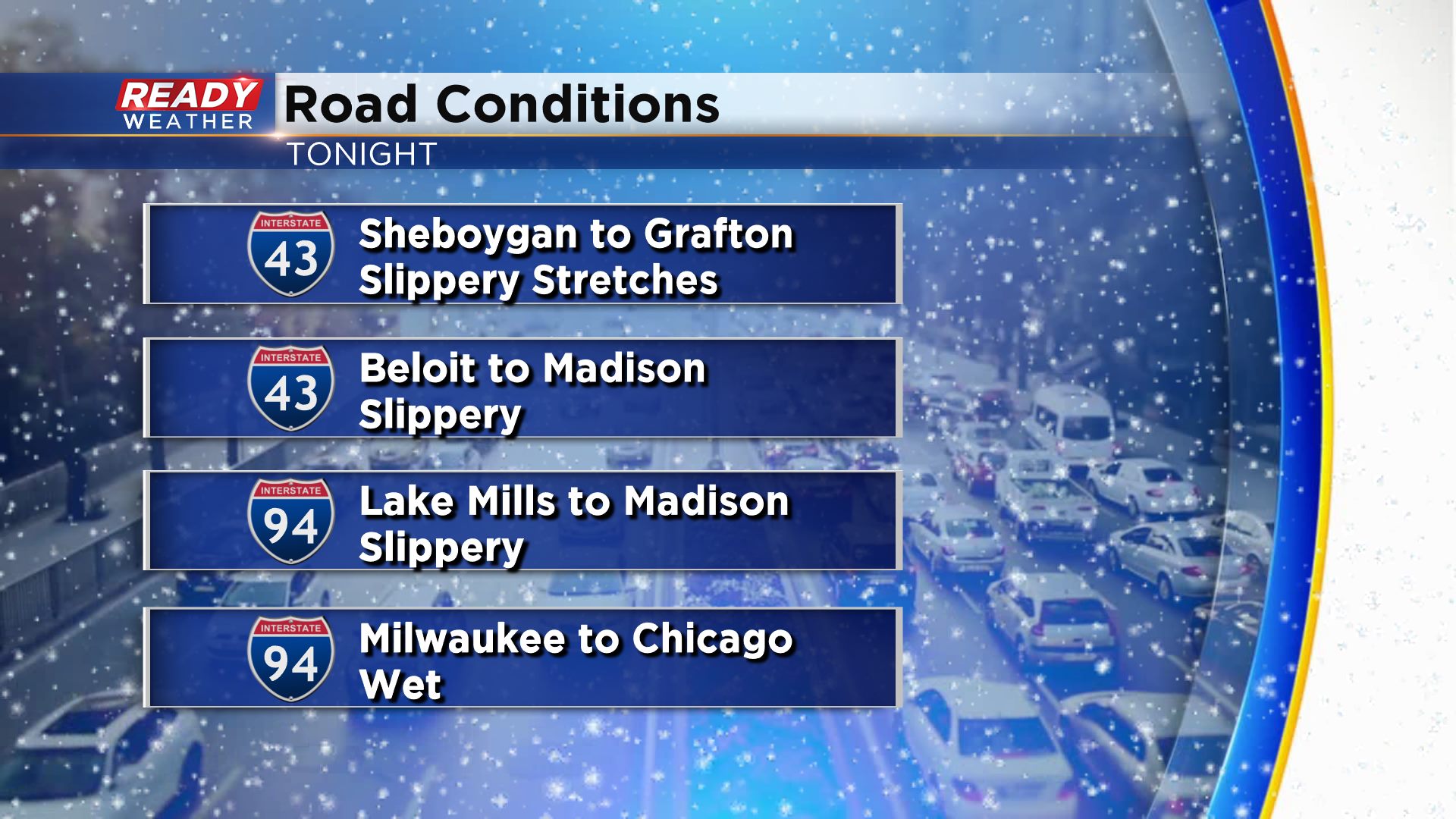 Thankfully surface temperatures have remained in the lower 30s or main roads would be snow covered.  Heavy snow to the west has created some travel issues with plenty of slippery stretches around Madison.  We do expect the snow to continue this evening before turning back to some rain. 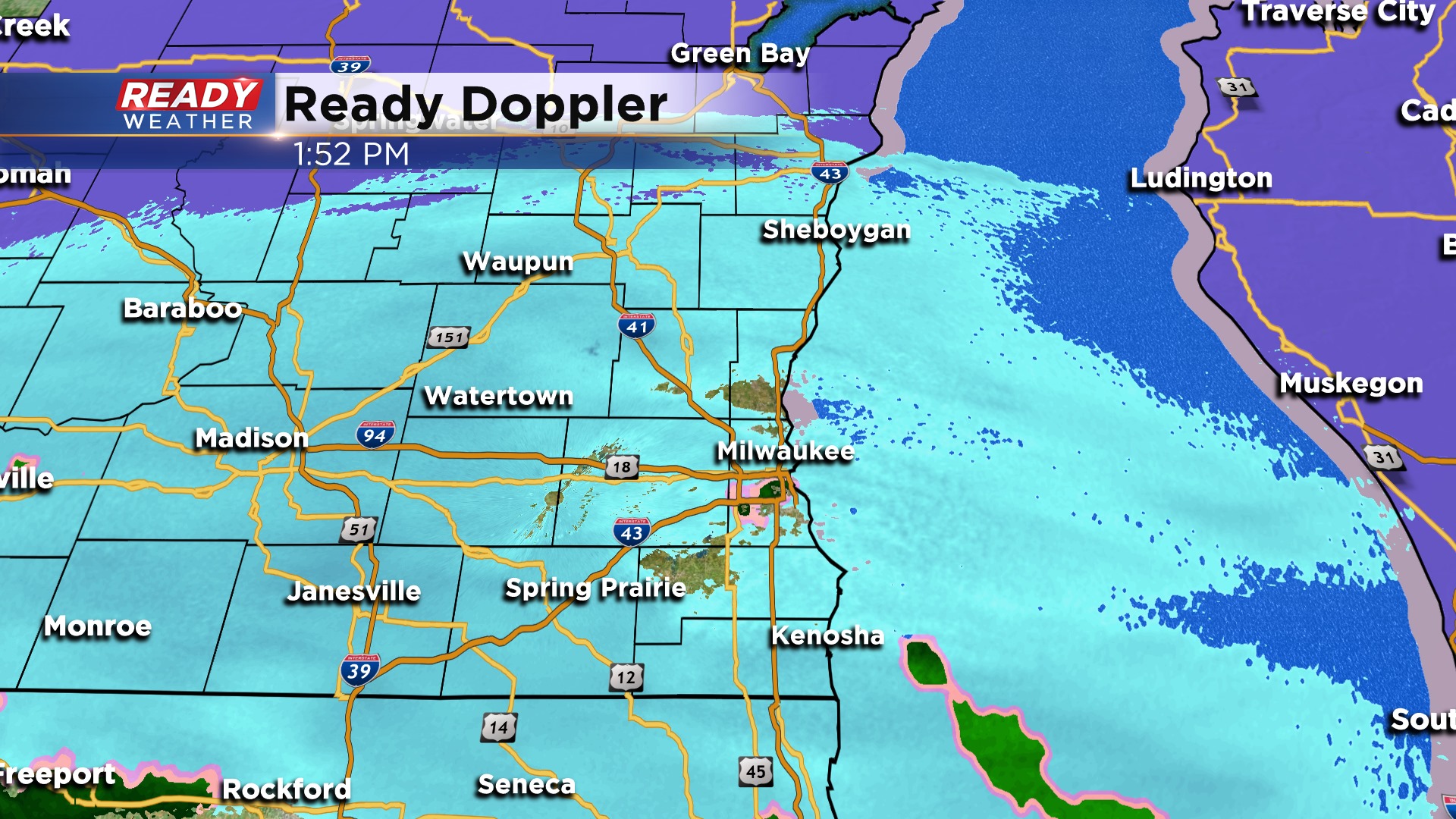 Snow is starting to fill in across the area.  Places west of Milwaukee have already picked up around an inch.  Snow will likely stick around through the evening commute and then transition back to rain for most of the area.  The exception will be Sheboygan and Fond du lac counties.

Those spots will likely see mostly snow until it moves out after midnight.  Several inches are expected there.

Some areas have seen a little snow late this morning and through the noon hour. Snow reports into the National Weather Service office include a half inch of snowfall in Watertown and at Sullivan. Here's the latest image on Ready Doppler: 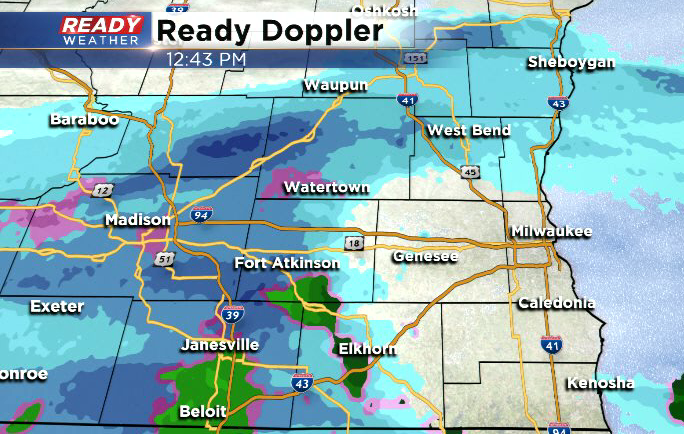 Milwaukee remains quiet at this time as the initial band of snow has pushed north, but do anticipate snow and or a wintry mix in progress for that evening commute. With temps near or above freezing main roads should be ok, with secondary roads a touch slippery. This area of low pressure is bringing a breezy south wind with temps well into the 30s. Typically warmer spots like Kenosha and even Milwaukee could push to near 40 late day. 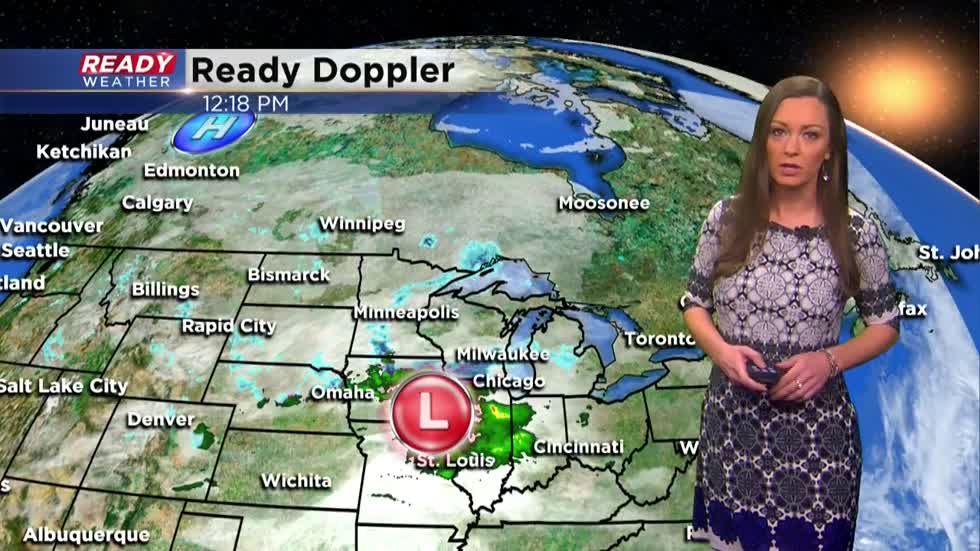 However, once this passes, canadian high pressure settles in and provides another blast of winter air by midweek.

Snow has started falling in our far western communities across the western parts of Jefferson and Walworth Counties. The snow will slowly spread across the area during the afternoon eventually making a slow transition to rain from south to north. By the evening commute expect mostly a rain/snow mix in Milwaukee and by this evening only Fond du Lac and Sheboygan Counties will just see snow. The forecast remains on track with 1-4" north of Milwaukee and less than 1" of snow and mix south. 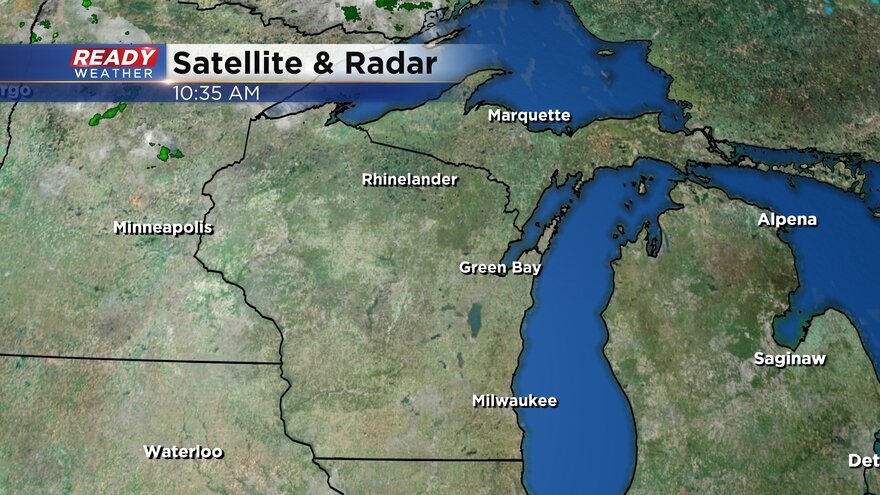 Another round of wintry weather is on the way for southeast Wisconsin and this one will be pretty messy. After a dry and cloudy start to Monday light snow will start to move in around noon. 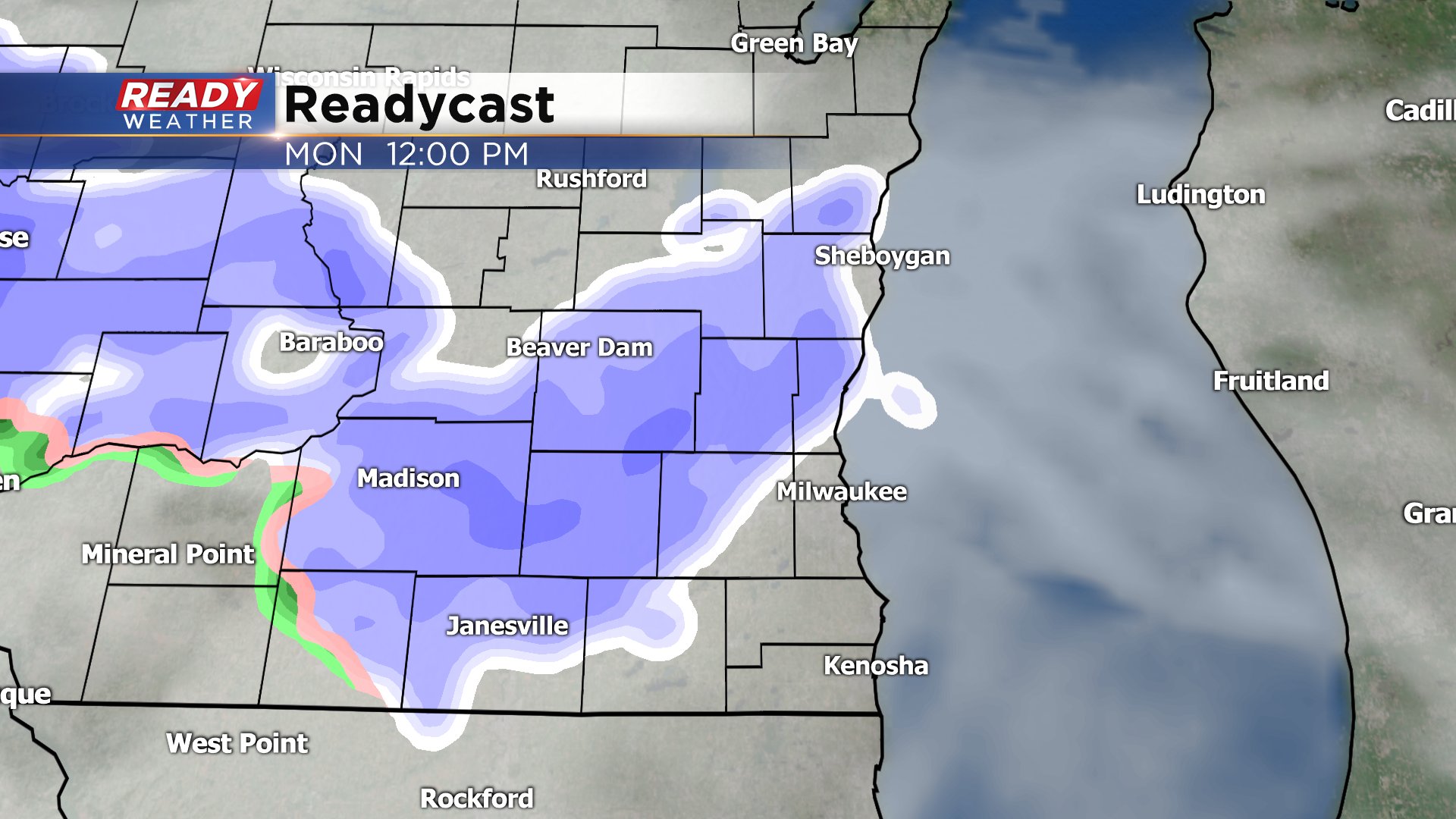 Precipitation starts as all snow for everyone before switching over to a rain snow mix for the evening commute. By 4 p.m. expect a rain/snow mix in Waukesha and Milwaukee with mainly snow north of there and mainly rain south. 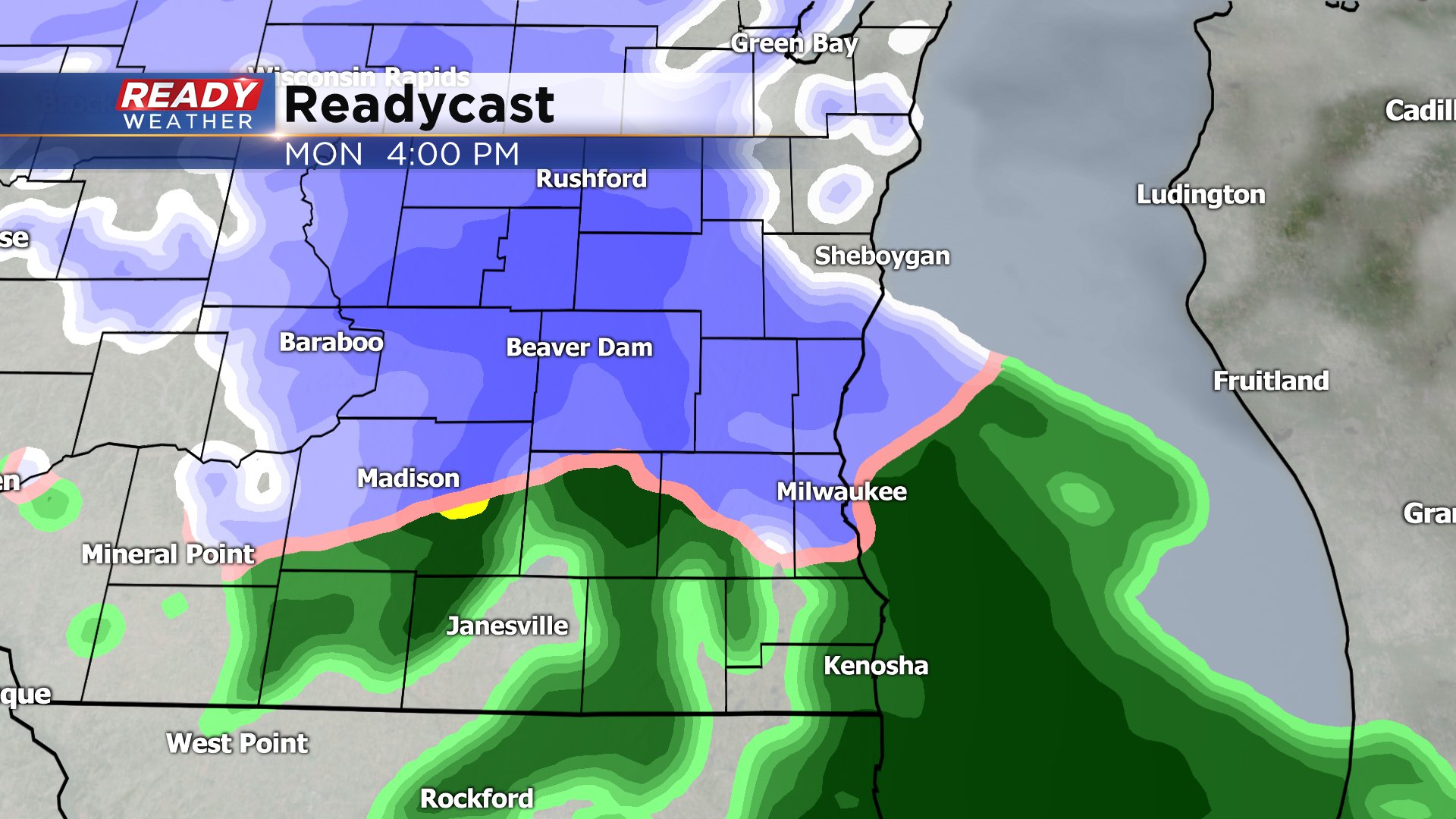 The rain/snow line continues to push north through the evening with most of southeast Wisconsin seeing rain during the evening. Only Fond du Lac and Sheboygan Counties stay under all snow during the entirety of the event. 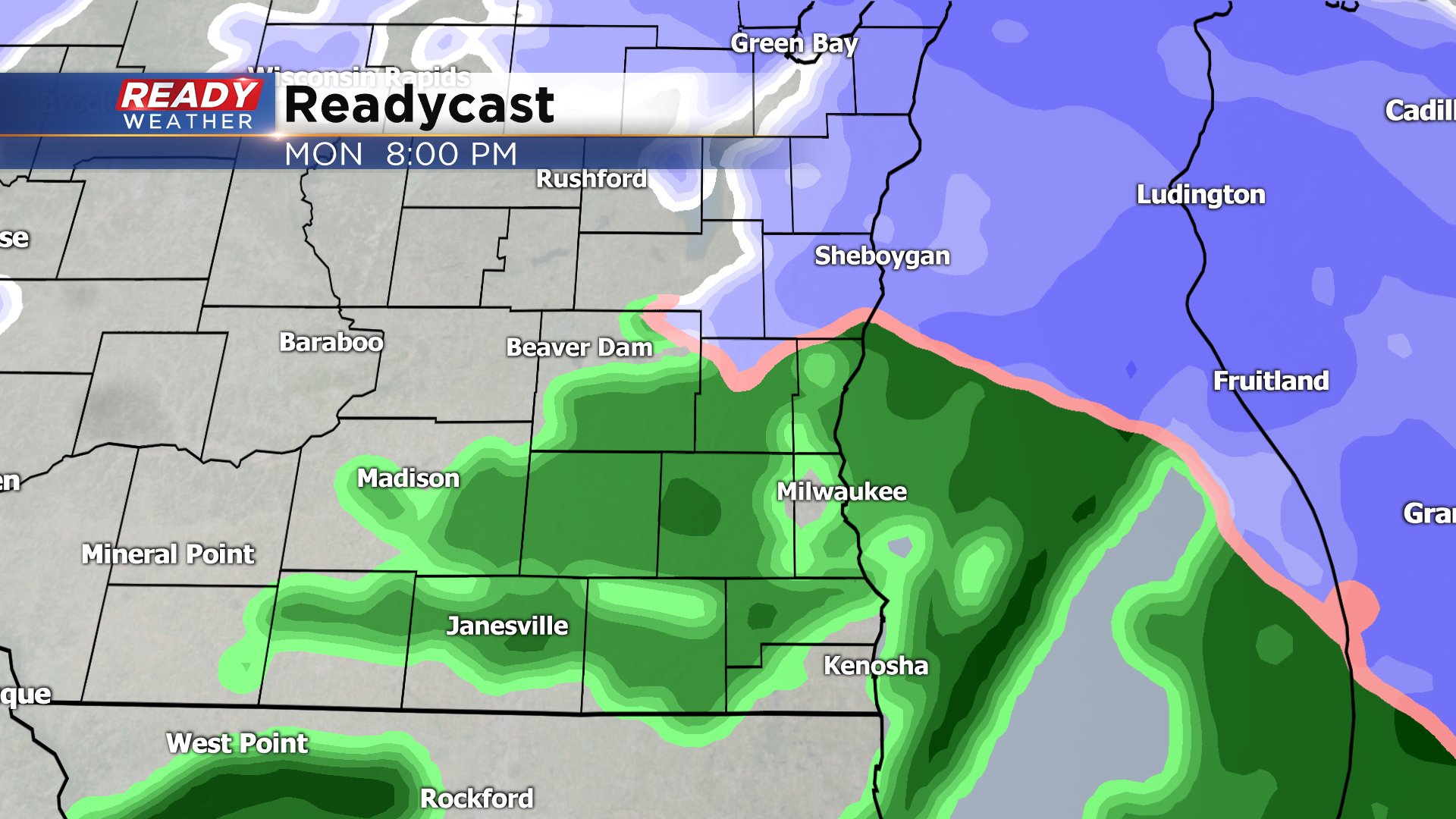 Because it stays all snow in those northern communities they will likely see the highest totals there. A winter weather advisory has been issued for Fond du Lac and Sheboygan Counties from noon until midnight. 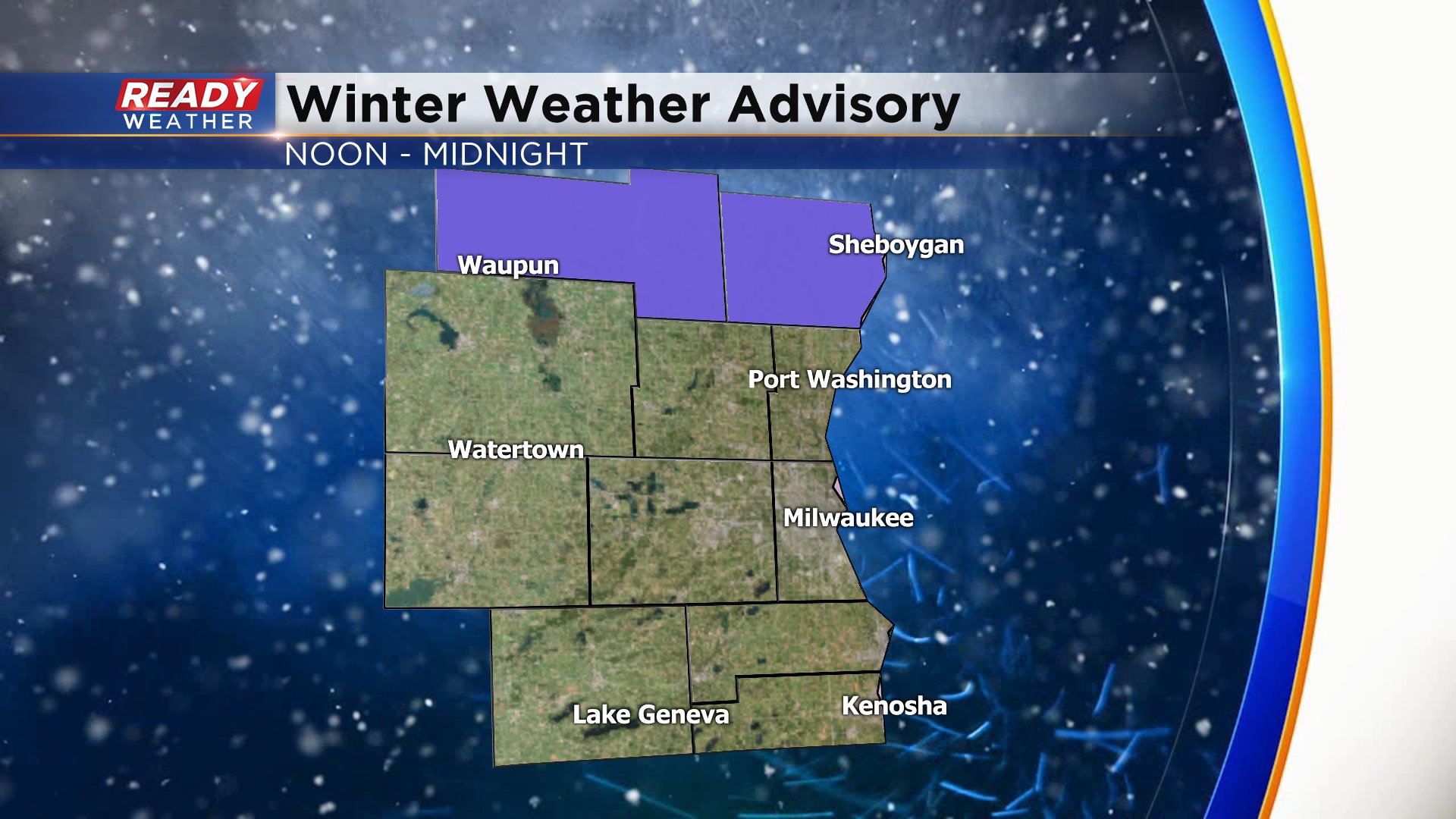 Those counties under the advisory can expect 2-4" of snow with 1-2" south of there and less than 1" in Milwaukee and areas south where it stays mainly rain. 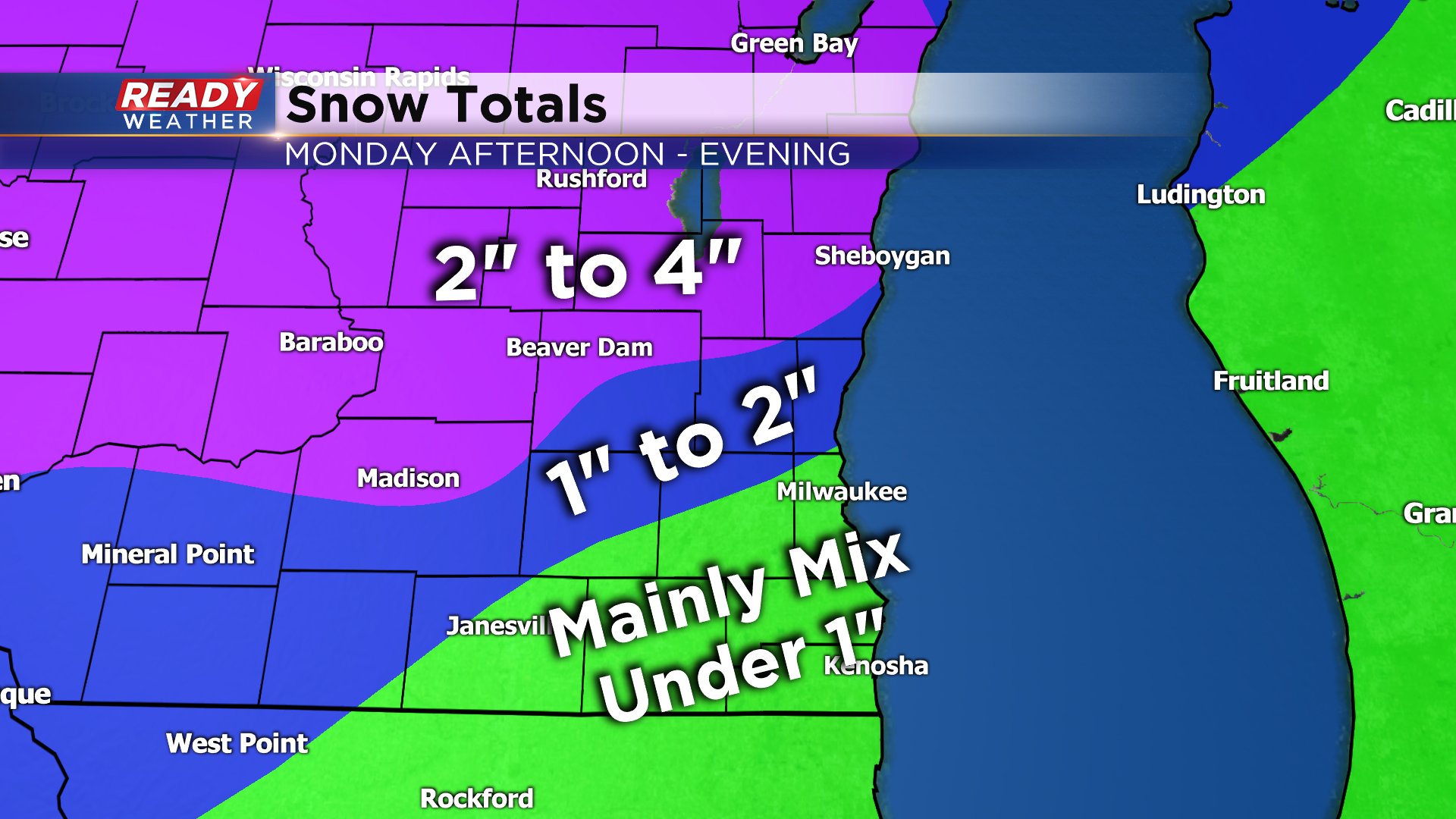 Roads could get a little snowy and slushy, especially in northern communities for the evening commute. Despite this being a wintry mix, no icing is expected as temperatures mainly stay above freezing. The wind could get a little breezy later this evening but blowing snow is not expected to be an issue. 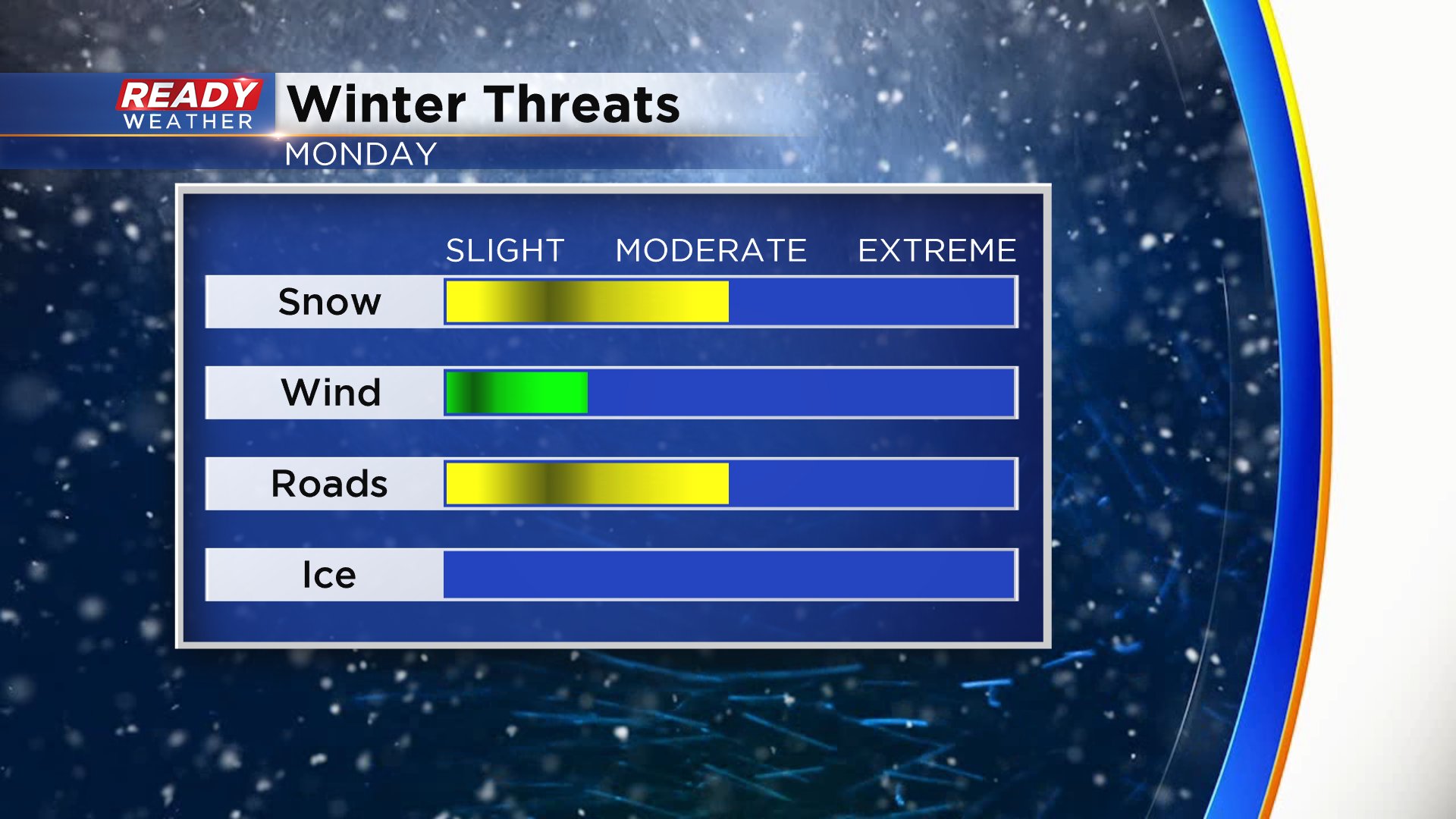 Download the CBS 58 Ready Weather app to track the snow, rain and mix as it moves in.