RACINE, Wis. (CBS 58) -- Law enforcement officials are investigating an incident after a Racine County man openly committed voter fraud by requesting absentee ballots be sent to him in the name of other voters in order to highlight alleged vulnerabilities in the state's election system, an act widely condemned by local and state leaders as illegal and an attempt to undermine democracy.

Harry Wait is a member of an organization called H.O.T. Government -- which stands for Honest, Open and Transparent. In an interview at his organization's booth at the Racine County Fair, Wait told CBS 58 he was alerted of an alleged vulnerability in the state's absentee voting system by a supporter of his group.

The supporter had one of their friends request their own absentee ballot be sent to their friend's address through the state's MyVote system, using only the supporter's name and date of birth. When the supporter carried out the action, they went to Wait and his group.

"We set up two computers and we went on and actually tested what she did," Wait explained to CBS 58.

After Wait tested the supporter's claims of vulnerabilities with the system, he did the same process of requesting ballots be sent to him in the name of other Wisconsin voters, including Assembly Speaker Robin Vos and Racine Mayor Cory Mason.

Wait then wrote to several officials of his actions in an email sent on the morning of Wednesday, July 27.

"These efforts verified that a very large-scale absentee ballot harvesting scheme with nefarious intentions is easily accomplished due to a lack of a secure website along with the maladministration and malfeasance of [Wisconsin Elections Commission] officials," Wait wrote in the email.

Among the officials Wait wrote to was Racine County Sheriff Christopher Schmaling.

Wait said he received a phone call from Sheriff Schmaling after sending his email to officials.

"He said 'I'm so grateful for what you did,' and so I said, 'does that mean you're not going to arrest me?' and he said either 'absolutely not' or 'hell no,'" Wait recalled.

Friday afternoon, on July 29, Wait sent CBS 58 an image apparently showing he received the absentee ballots for other voters, including Mayor Mason. 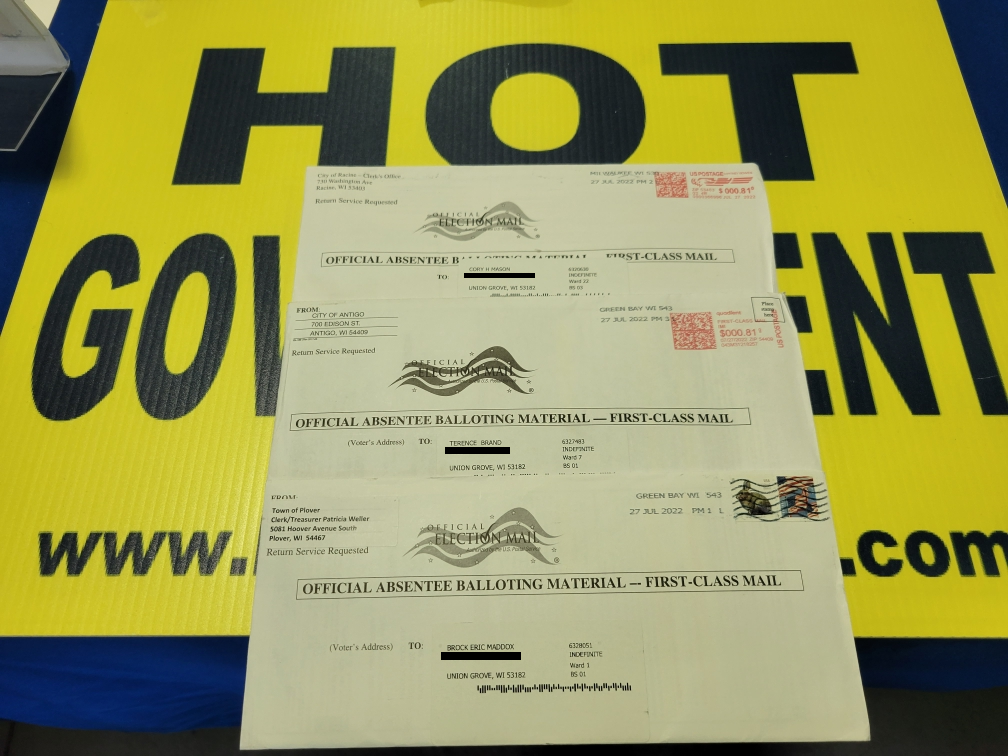 It's a misdemeanor to falsely request an absentee ballot, and obtaining that ballot on another voter's behalf is a felony under Wisconsin law, but it's something Wait is not shying away from because he said he hopes it leads to changes and more restrictions for requesting absentee ballots.

"I'm openly admitting that I'm actually the one who hit the button, just to actually show the world that we need to do something," Wait told CBS 58. "We've had too many years to do it and if I got to sit in jail for what I did, so be it."

"Attempting to vote an absentee ballot in the name of another person has long been, and continues to be, a crime," WEC Administrator Meagan Wolfe told reporters on July 28.

In an earlier statement, Wolfe said, "Intentionally using someone else’s identity to subvert the system does not demonstrate a flaw with MyVote, but rather a flaw with that person’s conduct."

Those sentiments were echoed by one of Wait's targets, Racine Mayor Cory Mason, who spoke with CBS 58 on Friday.

"It's about him trying to create a conspiracy where there isn't one to try to make it harder for people to participate in our democracy and that's really shameful," Mason said.

"You can be worried that there's not enough security at your local bank, you can't go rob the bank to make your point, right? So just so he believes that the system isn't secure the way that he would like, doesn't mean he can defraud voters to make his point," Mason said.

The Racine mayor said he is not concerned about his vote being affected, but rather he is more worried about the impact for other absentee voters.

"I hope there are enough real patriots out there who still believe in democracy who will stand up and say this is unacceptable, you're undermining our democracy."

During an emergency meeting Thursday, the WEC voted to send postcards to voters whose information may have been compromised by Wait and others. Commissioners also unanimously agreed to inform municipal and county clerks of the situation and encouraged them to flag potential cases of fraud to local district attorneys.

The issue was made public by the Racine County Sheriff's Office which called for a statewide investigation into the matter.

The office defended not arresting Wait after his confession in a statement Friday.

"Criminal arrests, where police physically place a citizen in handcuffs, are made after thorough investigations and the formulation of probable cause. Criminal arrests are not based upon late-night emails and requests to be arrested," the statement said.

Racine County Sheriff Christopher Schmaling has previously accused WEC officials of violating the law over allegations of voter abuse in nursing homes, but no district attorney ever prosecuted the claims of fraud.

"I am disheartened by the apparent vulnerabilities in MyVote Wisconsin that are ripe for fraud, and everyone – no matter their political leanings – should join in requesting a thorough, statewide, investigation into this significant election integrity issue," Sheriff Schmaling said in a statement Friday.

"[The Wisconsin Department of Justice] is aware of reports of ballots being requested in Racine County for registered voters without their permission," DOJ Director of Communications Gillian Drummond told CBS 58 in an email Friday afternoon. "DOJ has been in contact with DA [Patricia] Hanson and will be investigating this matter."

CBS 58 reached out to Wait for reaction to the DOJ and Racine County DA launching investigations.

Wait said in a text message, "I will face the court of public opinion."