MADISON, Wis. (CBS 58) -- High profile endorsements in recent days are beginning to elevate the Republican primary race for governor, another indicator of what's anticipated to be a close and competitive election.

Wisconsin has become the third state where former Vice President Mike Pence has endorsed the opposite candidate of his former boss Donald Trump. Last week, Pence announced he will back former Lt. Governor Rebecca Kleefisch, which followed an endorsement by U.S. Sen. Ted Cruz (R-TX).

Kleefisch has aligned herself as the established candidate and also secured endorsements from more than 50 GOP state lawmakers, including her former running mate, then-Gov. Scott Walker.

Michels is running as an outsider and has largely self-funded his campaign with his massive wealth as the co-owner of Michels construction company.

But how much weight does an endorsement carry?

Polling suggests Pence faces an uphill battle of attracting primary voters as Trump continues to have strong support, but the real test will come Aug. 9 when voters cast their ballots in the battleground state.

Barry Burden, political science professor at UW-Madison and director of the Elections Research Center, predicts endorsements could make a difference because Kleefisch and Michels are both running on similar policy issues such as abortion, electric integrity and rising crime.

"For voters who are not paying a lot of attention or can't find the subtle difference between candidates – knowing Trump is behind one of them could be a tipping point," said Burden.

A recent poll conducted by CBS News found 57% of Republican voters are more likely to vote for a candidate endorsed by Trump, 10% are less likely and 33% surveyed said it wouldn't matter much. 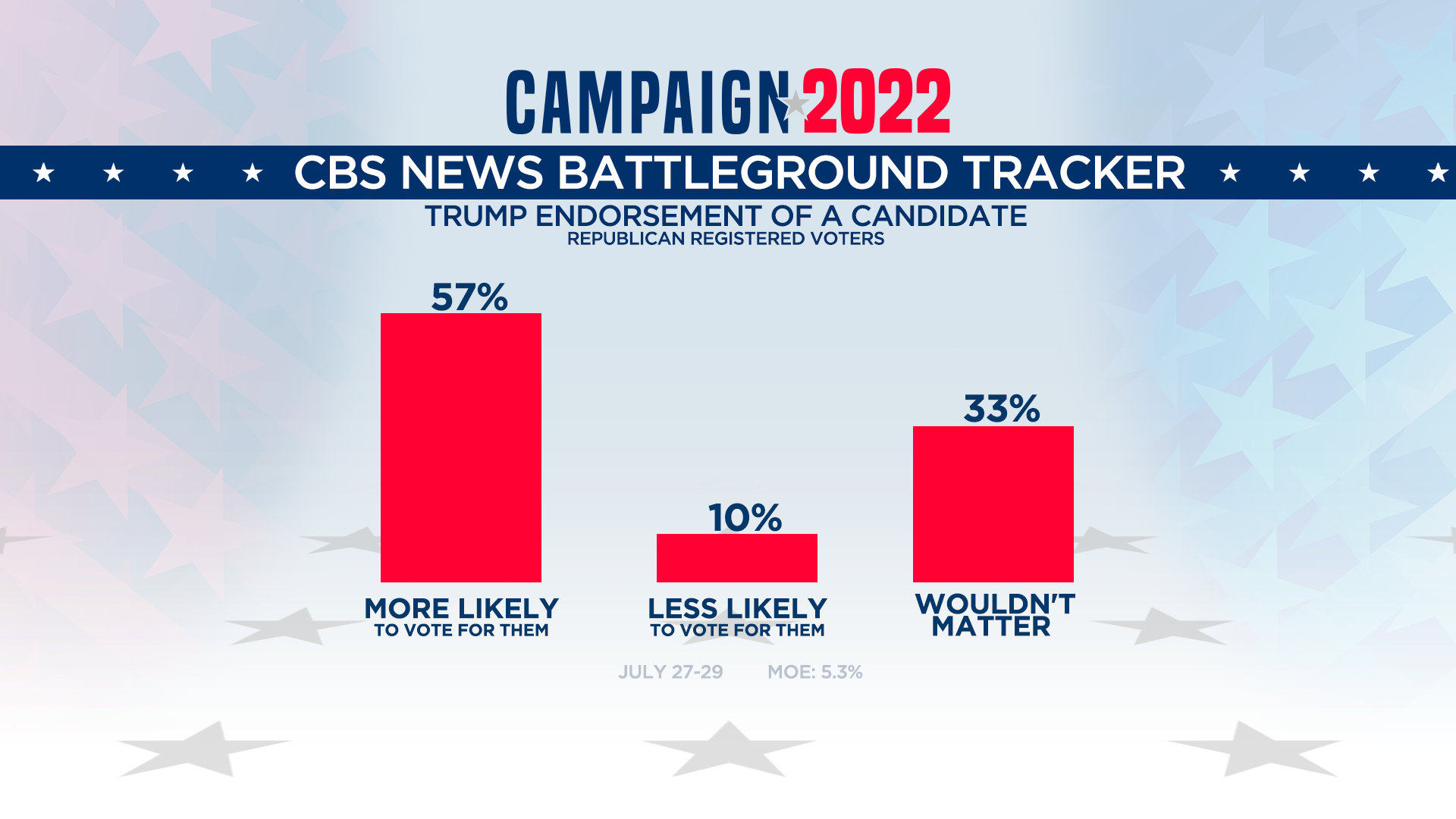 In Arizona and Georgia, Pence endorsed opposing Republican primary candidates to Trump. Pence has only had one victory in Georgia where his preferred candidate, Gov. Brian Kemp, defeated Trump's pick, former Sen. David Perdue, by more than 50 percentage points.

Trump to Rally in Waukesha

On Friday, Trump will host a rally in Waukesha for his endorsed candidate, but recently Michels has distanced himself from the former president's impossible request to decertify the election and refused to say whether he would support Trump's presidential run in 2024.

Earlier this month, Michels said decertifying the election is "not a priority" when asked during a WTMJ televised debate. On Monday, Michels didn't commit to backing Trump in 2024 during a town hall hosted by WISN.

"I'm focused on this election right now," Michels said. "I have made no commitments to any candidates in 2024. What I am focused on is beating Tony Evers."

Kleefisch also declined to say whether she would back Trump during the presidential election season, but has consistently said there is "no pathway" to decertifying the 2020 election in Wisconsin. Legal and constitutional experts have said decertification is impossible.

Trump handed out another endorsement in Wisconsin on Tuesday.

“Wisconsin’s 63rd Assembly District has a rising patriotic candidate named Adam Steen, who is running against the RINO Speaker of the Assembly, Robin Vos,” Trump said in a statement. “Although Vos claims to be a Republican, he is constantly fighting America First efforts and policies. Our great slogan, Make America Great Again, is not exactly high on his list!”

It comes after Trump issued several statements on his social media platform bullying Vos for refusing to take steps to decertify the 2020 election.

“Robin Vos consistently blocked efforts at conducting a full cyber forensic audit of the 2020 Election….Adam Steen, on the other hand, is a motivated Patriot. He has had the courage to stand up strongly against “Speaker” Vos….Adam Steen has my Complete and Total Endorsement!”