First accumulating snow of the season arrives Tuesday. Several inches likely away from the lakefront.

NOW: First accumulating snow of the season arrives Tuesday. Several inches likely away from the lakefront.

The National Weather Service is not issuing a winter weather advisory at this time.  The first snow of the season is expected for the entire area on Tuesday.  This evening will remain quiet; however, after 4 am we do expect snow to develop across southeastern Wisconsin.

The Tuesday morning commute will be impacted by snow.  This snow will be a wet slushy snow, and coudl cause issues on the roads, especially away from the lakefront.

Clouds unfortunately filled back in across southern WI this afternoon and mostly cloudy skies will continue through Monday as a couple areas of low pressure approach Wisconsin. Temps rise into the mid to upper 30s Monday despite the cloud cover with mainly dry conditions. 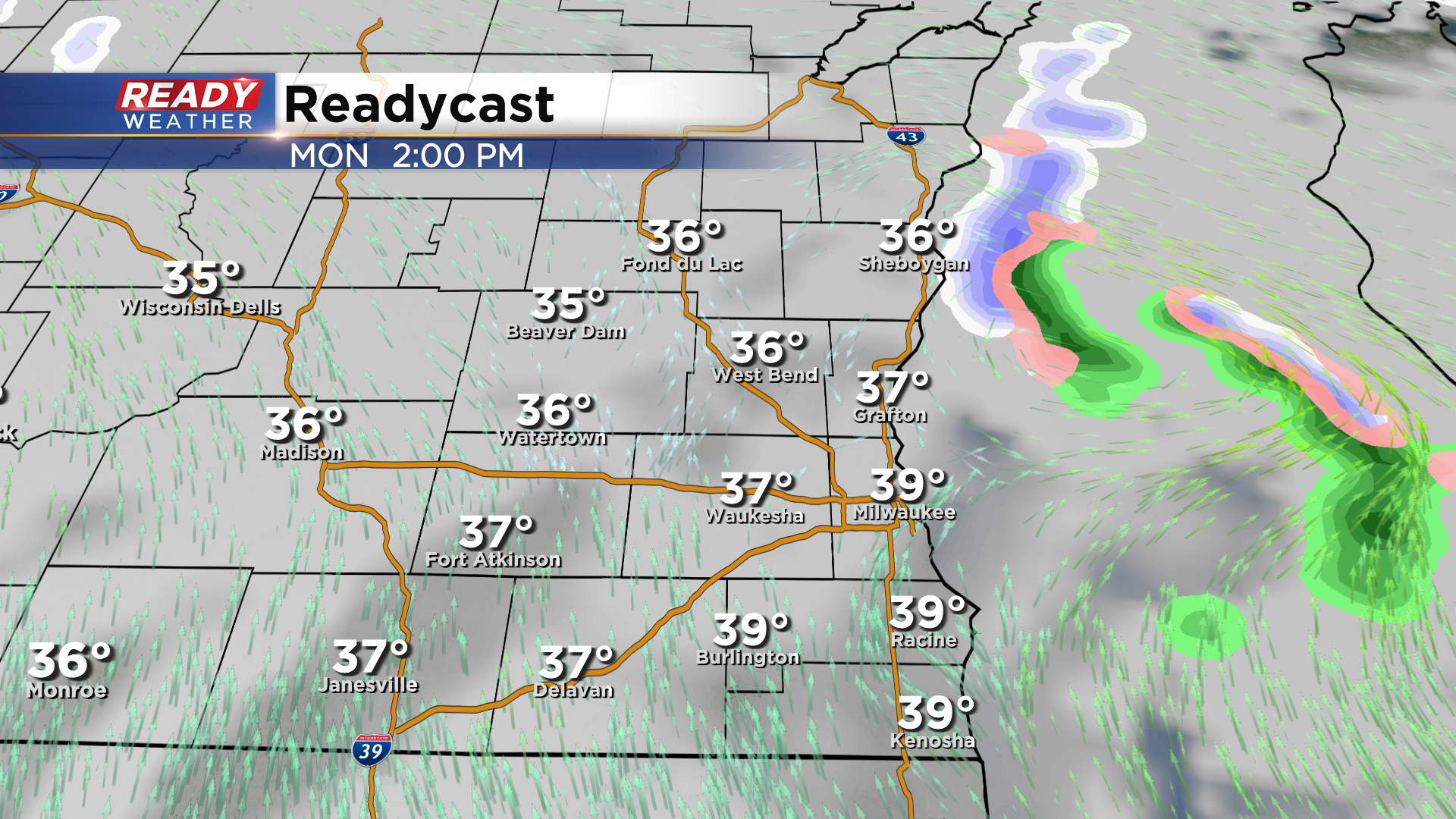 Chances for precipitation return as early as Monday night for lakeside counties as winds turn to the southeast, bringing in a mix of rain and wet snow. 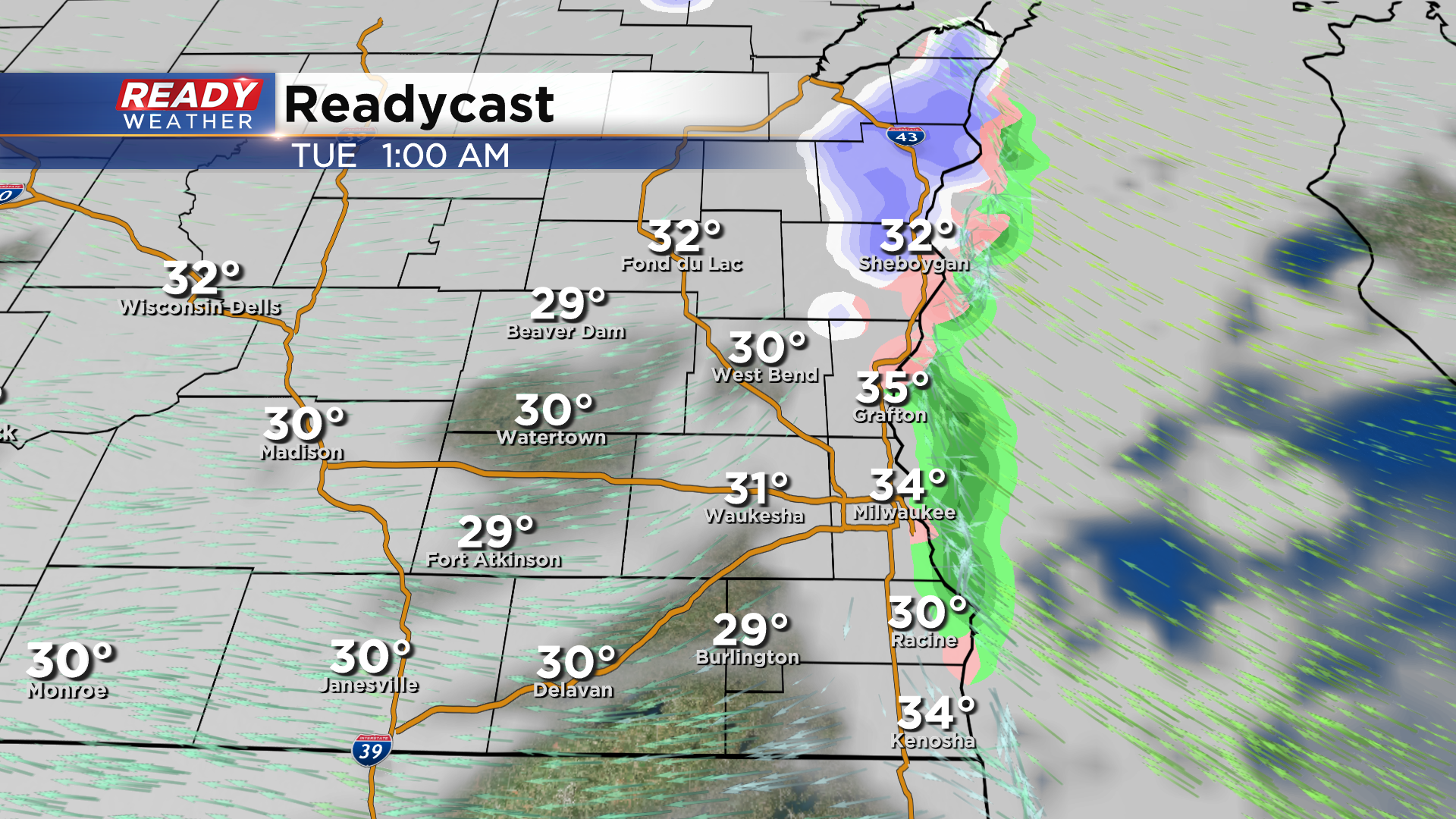 The wet snow becomes widespread Tuesday morning and continues throughout the day. Some rain is expected to mix in lakeside from late morning through mid afternoon as the southeast wind brings in warmer temperatures off the lake. Temps during the day Tuesday will be between 34-38° (warmest lakeside), which will make this a wet, slushy snow. It'll also help limit accumulation to primarily grassy and elevated surfaces for much of the day. 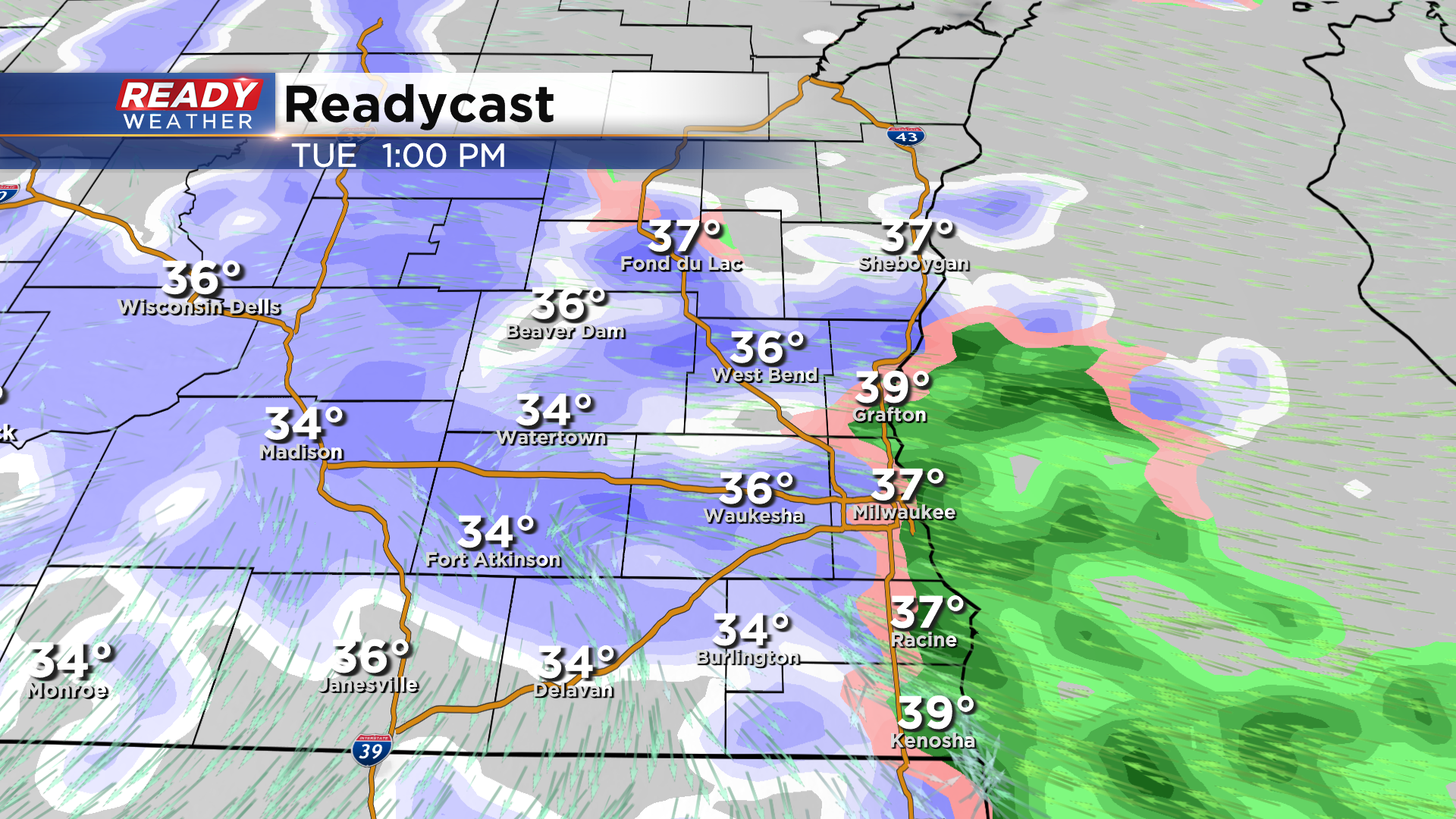 By Tuesday night, the widespread snow will become more patchy. Temperatures will also slip back into the lower 30s, which could create slippery spots overnight, especially on untreated inland roads. 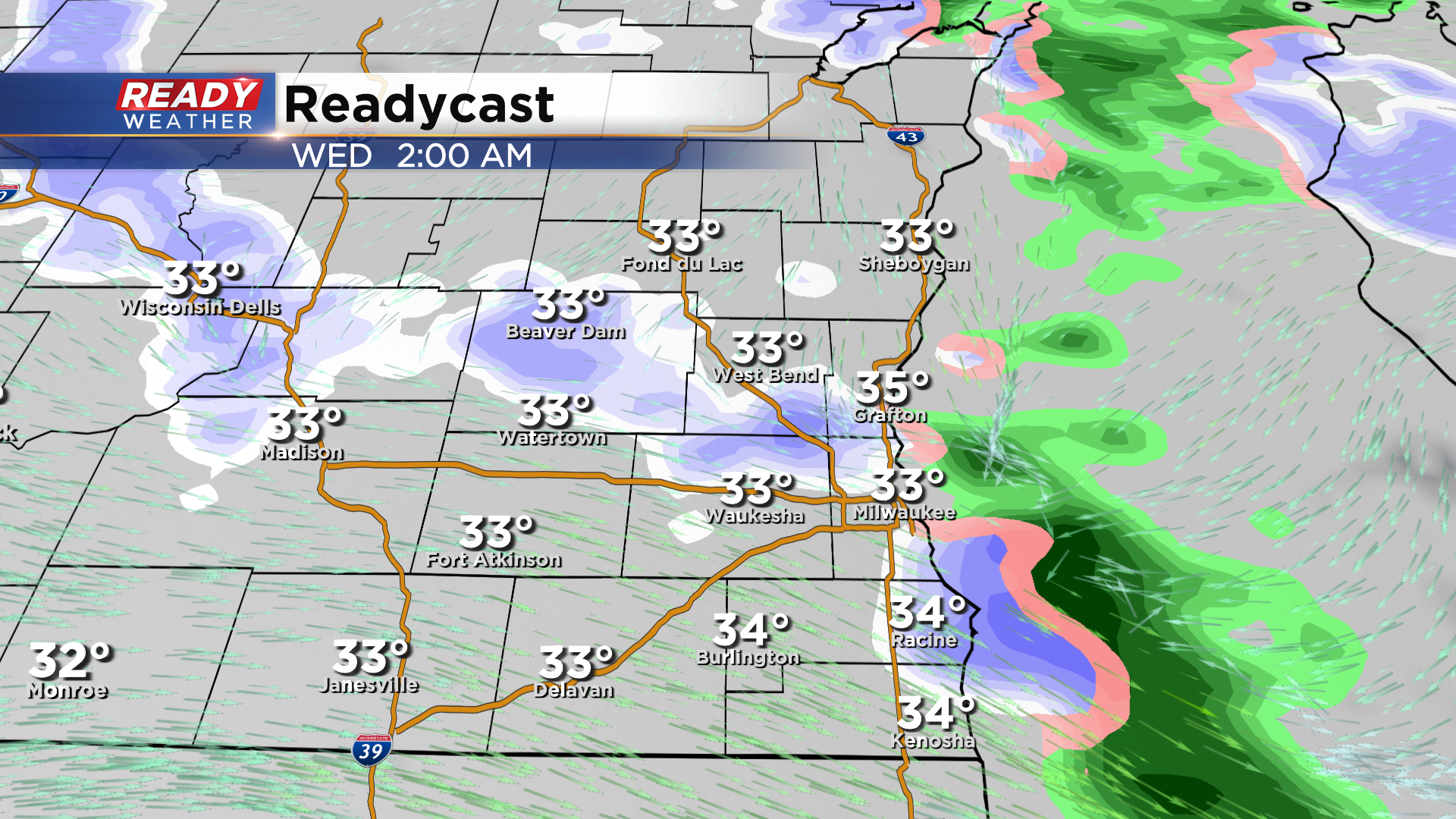 Additional wet snow showers are expected on Wednesday, but with even warmer temperatures there won't be much more in the way of accumulation. From Tuesday through Wednesday, most of southeast Wisconsin will likely pick up 1-2" of wet, slushy snow, mainly on the grass. Areas right along the lakefront from MKE to Kenosha will be closer to 1", while areas near the Kettle Moraine NW of Milwaukee could pick up 3". 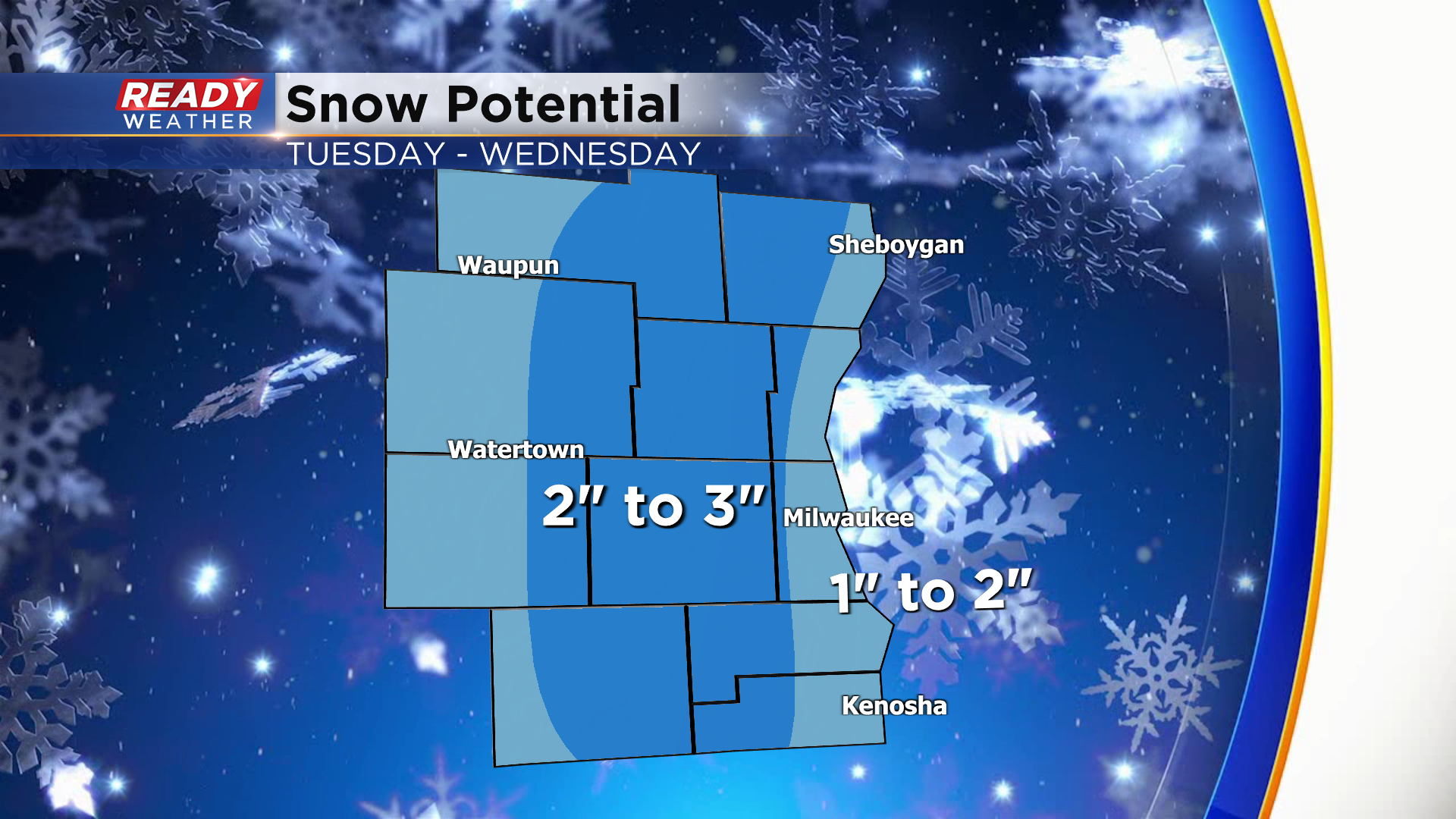 Since we haven't had a ton of freezing weather lately, the ground is still above freezing. That combined with air temps between 34-38° during the day Tuesday will lead to primarily wet roads on Tuesday with patches of slush. There's more of a concern for slippery spots later Tuesday night into early Wednesday morning due to refreeze. 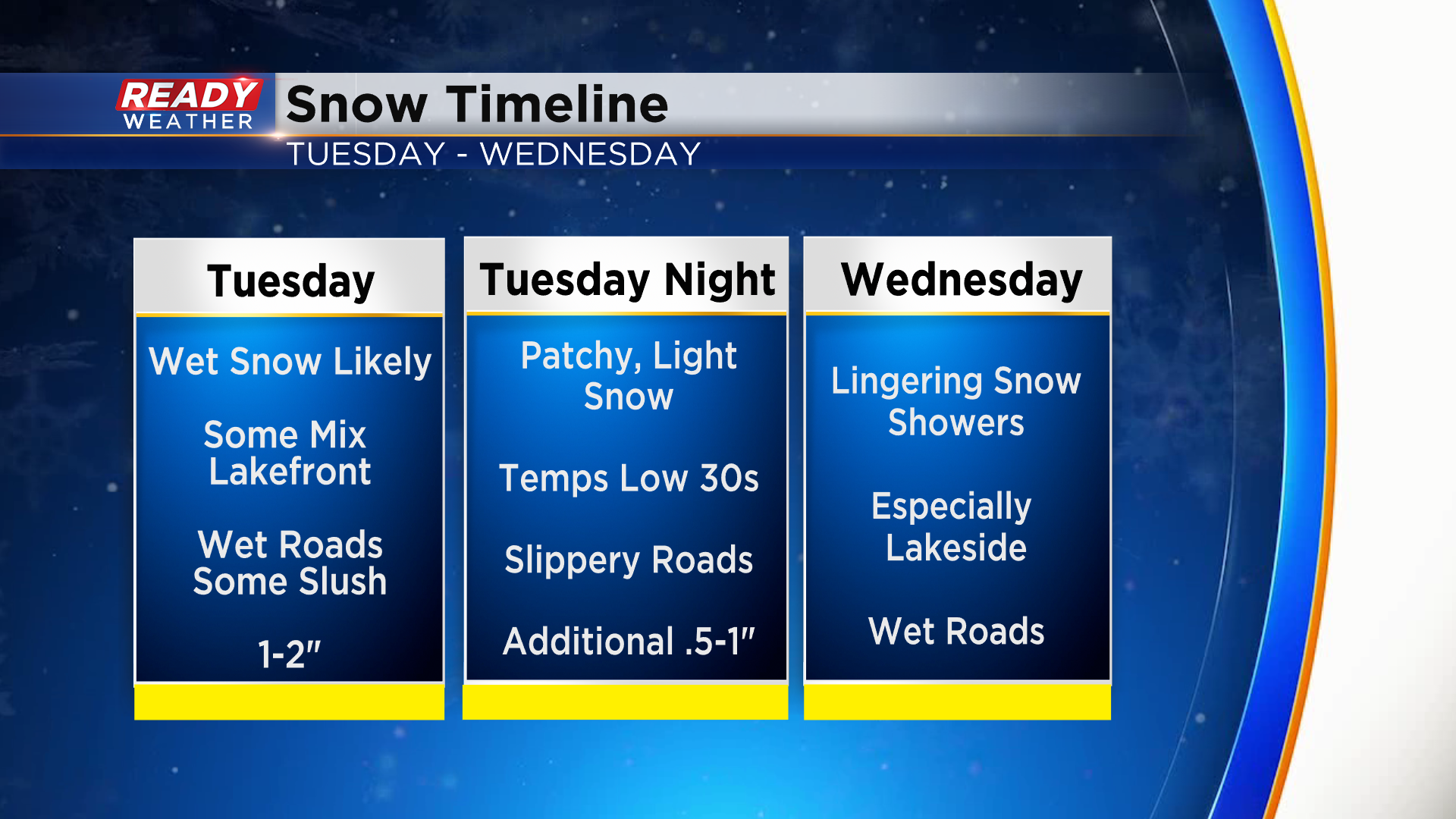 Any snow from this system wraps up Wednesday evening, but more snow showers are possible Thursday. Temps won't warm out of the 20s by the end of the week behind these two systems. Download the CBS 58 Ready Weather App to see the full 7 day forecast.