MILWAUKEE (CBS 58) -- There are a lot of stories out there about people helping other people. But recently, a team of special people came together to help a very sick animal. Doctors and veterinarians teamed up at the Milwaukee County Zoo for a life-saving surgery on a young bonobo named Qasai.

Qasai is four and a half years old, which means he’s usually very active. Recently, keepers at the zoo picked up on some unusual behavior.

“Our bonobo keepers noticed Qasai was spending a lot more time on his mom,” said Patricia Kahn, curator of primates and small mammals.

Initially, they thought his symptoms could have been from an ear infection or a toothache.

“He was pulling at the side of his mouth and tapping the side of his face, and he even had a little bit of a head tilt,” said senior staff veterinarian Dr. Pamela Govett.

Dr. Govett and Kahn are two members of the team that eventually diagnosed Qasai with lesions on his brain and a potentially deadly abscess.

“Those are abscesses in his cerebellum,” Dr. Govett said, pointing to a scan of Qasai’s brain.

“I'm told I have a good head for seeing this, so it's like way back here and underneath,” Dr. Wade Mueller said with a laugh on a zoom call, pointing to the back of his head, where the doctors had to operate.

Dr. Mueller is a professor of neurosurgery at the Medical College of Wisconsin, and a neurosurgeon at Froedtert. Bonobos aren’t his usual patients, but this was a special case.

“They're very precious little creatures because they're quite endangered,” he said. “And so, the decision was made to try and do something about it.” 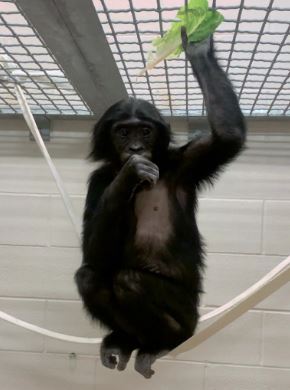 Dr. Govett explained that bonobos aren’t really too different from humans, though.

“Bonobos are related to chimps. They actually share 99.6% DNA with them and they share 98.7% of their DNA with us, so they're very similar to us,” she said.

The team of specialists represents the zoo, Froedtert, the University of Wisconsin Madison Veterinary Anesthesiology Department, Lakeshore Veterinary Specialists, Children’s Wisconsin and more. Many donated their time and expertise to remove the lesions and treat the abscesses.

“It was amazing. Just from start to finish, I really enjoyed learning,” Dr. Govett said of the experience.

Team members who are used to treating humans agreed.

“It was a once in a lifetime experience that I'll never forget,” said Staci Gaulke, neurosurgery service coordinator at Froedtert.

Gaulke said it truly was a team effort.

“It was crowded. There was a lot going on. Everybody had their role,” Gaulke said. “But everybody worked really, really well together. They have an excellent staff. Everyone was really friendly.”

It took about five and a half hours for the team to finish Qasai’s sugery. He also spent five days in a medically induced coma to help with the healing process.

“Oh, he's doing wonderfully! He is just doing so wonderfully,” Dr. Govett said of his recovery.

Khan and her team of keepers helped provide Qasai with around the clock care. Khan said it was good to see his personality come back as he started feeling better.

“He's a very precocious young little male, so, you know, he'd start giving a little attitude, be very playful again, so that was a good sign he was recovering,” she said.

Qasai is still in the animal hospital. Dr. Mueller said his recovery will take months, not days, and he will need a long course of antibiotics. An MRI on April 25 showed the abscesses will need to be surgically drained and flushed again. Qasai will then be placed on different antibiotics to clear up the infection. After the infection is gone, he will be reunited with his family, who are among the 19 bonobos at the zoo.

For now, the zoo staff has brought another bonobo to the hospital to keep him company, a 7-year-old named Nadine.

“After we were sure that his incision had healed and that he was stable, we brought up a friend, Nadine, for him,” Dr. Govett said. “They have been swinging together and cuddling at night together.”

The vet staff isn’t sure what caused the abscesses to begin with, but thanks to the caring staff and some very helpful humans, he should make a full recovery.

“This is the first case I'm aware of in which we have diagnosed it early, and thanks to the outpouring of love and support from the medical community, we came together and saved Qasai's life,” Dr. Govett said. “He’s very lucky.”

If you’d like to nominate someone for Natalie’s Everyday Heroes, send Natalie a message at [email protected]