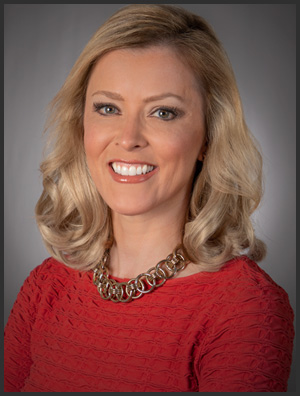 Natalie Shepherd anchors the CBS 58 News at 5, 9, and 10 p.m. with Bill Walsh. She is excited to return home to the Midwest after spending time in Tampa and Louisiana.

Natalie grew up in a small town outside of Detroit, Michigan. She graduated from Kalamazoo College with a degree in English Literature, but didn’t know a career in journalism was in her future. After spending a short time working for an advertising agency in Chicago, Natalie decided to apply to Northwestern University’s graduate program, and the rest is history. She started her reporting career at WILX-TV in Lansing, Michigan, where she covered state politics and Michigan State University. From there, it was on to WWMT-TV, where Natalie worked as the Battle Creek bureau chief. During her time there, Natalie was honored with a regional Emmy award for her story on a local football star, paralyzed in a motorcycle accident, and his struggle to walk again.

It wasn’t long before Natalie moved on to a warmer climate at WFLA-TV, in Tampa, Florida. While in Tampa, Natalie covered everything from tropical storms, to the Republican National Convention, Super Bowl XLIII, and the Tampa Bay Rays’ World Series run in 2008. It was also in Tampa that Natalie made the move to investigative journalism, working with WFLA’s 8 On Your Side Investigative team. She was also named anchor of the Midday newscast.

When she’s not at work, Natalie enjoys cooking, reading, and checking out new restaurants. She’s also a certified barre instructor who loves to work out.

Moving to Milwaukee is an exciting adventure for Natalie, her husband, Robert, and their two cats, Amos and Fifi. Send Natalie an email at nshepherd@cbs58.com, or connect with her on Facebook and Twitter, @NewsNatalie.