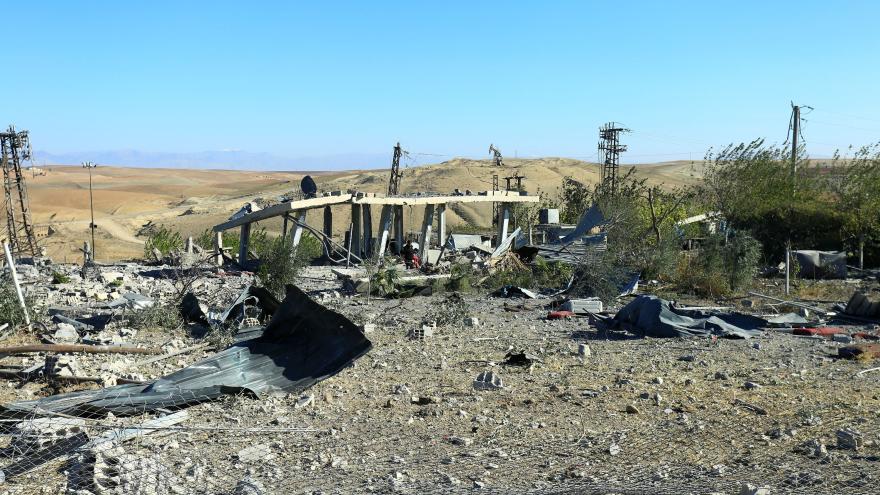 (CNN) -- Eleven people have been killed in Syria, including one journalist, after Turkish warplanes carried out an "air operation" in the country and neighboring Iraq late Saturday, according to an official from the US-backed Syrian Democratic Forces (SDF). There have not been any casualties reported from the Iraqi side.

The campaign follows a deadly explosion in the heart of Istanbul a week ago, which Turkish officials said Kurdish separatists were responsible for, a claim denied by Kurdish groups. That attack killed at least six people and injured at least 81 others.

Shami said the strikes impacted north and eastern Syria, destroying a hospital in Kobani and a power station in Derik, as well as destroying grain silos in Dahir al-Arab.

An eyewitness told CNN warplanes conducted airstrikes near Tal Rifaat city, in the northern countryside of Aleppo, which is controlled by the YPG.

"Terrorists' shelters, bunkers, caves, tunnels, and warehouses were successfully destroyed. We followed them closely. The so-called headquarters of the terrorist organization were also hit and destroyed," Hulusi Akar said in an address from the capital Ankara, Anadolu reported.

Both Turkey and the United States consider the PKK a terrorist organization. The two countries disagree on the status of the military wing of the YPG, which has been a US ally in the fight against ISIS in Syria, but Turkey considers it the Syrian extension of the PKK.

A woman has been detained under suspicion of carrying out the deadly blast in Istanbul last Sunday. She has been identified as a Syrian national who was trained by Kurdish militants, according to Turkish authorities.

Officials from the SDF, the YPG and the People's Defense Forces (HPG), which is the armed wing of the PKK, have all denied involvement in the attack.

Meanwhile Bulgarian prosecutors have brought charges against five people for supporting terrorist acts in connection with the blast.

Charges have been brought against the five individuals for two crimes, Bulgarian Supervising Prosecutor Anglel Kanev told reporters Saturday. "One [is being in] an organized crime group for trafficking and human trafficking. The other is, according to article 108A in the criminal code, generally speaking, aiding to a certain extent at a certain moment, terrorist activities."

All of the suspects are foreign nationals, and one has dual Bulgarian citizenship, Kanev said.