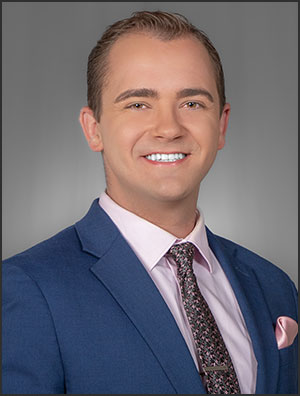 Emerson Lehmann joined CBS 58 in November 2021. He anchors the Sunday edition of the CBS 58 Weekend Morning News and works as a general assignment reporter throughout the week. Emerson also contributes stories to CBS 58 Sunday Mornings.

A Kewaskum native, he is grateful to be working so close to his hometown at Your Hometown Station.

Emerson came to Milwaukee from Wausau, Wisconsin, where he began his career as a weekend anchor at reporter at WSAW-TV. He held that role for a year-and-a-half before being promoted to weekday morning anchor. During his time in Wausau, Emerson was honored by the Wisconsin Broadcaster's Association with a first-place award in the Best Live On-Scene Reporting category.

He is a 2019 graduate of Ball State University in Muncie, Indiana. At Ball State, Emerson majored in Telecommunications - News and Journalism and minored in creative writing.

Emerson is a huge motorsports fan, having grown up racing snowmobiles, go-karts and Legend cars here in Wisconsin. He's a big fan of the Milwaukee Brewers and Bucks, and an avid pickleball player.

If you see Emerson out and about be sure to say "Hey!"