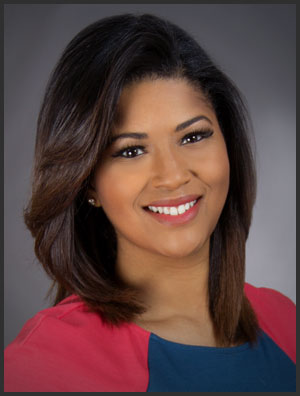 Amanda Porterfield is an award winning journalist who has covered four states throughout her 15 year career. Porterfield started 2005 – beginning in Indiana as an intern at WNDU while completing her bachelor’s degree at Saint Mary’s College in Notre Dame, IN. From there, she moved up to production assistant and eventually started reporting for the weekend newscasts. Then it was at the ABC affiliate in Chattanooga, TN between 2008-2012 where Porterfield did it all. Alone, she uncovered, gathered video and interviews, wrote and presented stories on a variety of shifts. Porterfield also learned other newsroom roles such as producing, editing and running the assignment desk.

Using a variety of skills Porterfield excelled as an anchor and reporter at Champaign’s flagship station WCIA from 2012 until 2016, where she also managed the weekend newscasts and crews.

However, another of Amanda Porterfield’s passions is investigative journalism, and expanding on stories that highlight social issues in the community. The Illinois Broadcaster’s Association awarded Porterfield with “Best Hard News Story” for her coverage of a woman addicted to heroin and her attempt to get help. The NAACP honored Porterfield with the “Social Justice” award for her unbiased reporting about social justice issues and honoring a culture of diversity in the community. She also worked closely with the Champaign County Sheriff’s Office on creating more opportunities for those with mental and behavioral issues.

Here in Milwaukee, a place where she spent time growing up and much of her family still calls home, she has been able to professionally come full circle. Amanda Porterfield went to elementary school at Emmanuel Phillip on 16th and Olive, and spent her young years growing up in Milwaukee’s Rufus King Neighborhood before moving to Chicago. Now Porterfield is CBS 58’s Noon and 4pm Anchor.

She started here in 2016 as the weekend anchor and lead night side reporter where getting exclusive interviews and stories became a trademark. Porterfield has helped CBS 58 receive several awards including those for reporting coverage during the Sherman Park Unrest. She has also helped the station receive a Chicago/Midwest Emmy nomination for anchoring and producing an hour long prime time special called, “Milwaukee at a Crossroads” which took an in depth look at how gun violence affected Milwaukee families who’ve lost children. She has been named one of Wisconsin’s Most Influential Black Leaders by Madison365. Porterfield is also a founding member of Milwaukee Crime Stoppers, and currently serves on the board. You can find her weekly “Crime of the Week” segments every Thursday during the 4, 5, 9 and 10pm newscasts.

A.P, as people in the newsroom and around the city all her is grateful to be able to work on stories that matter to all people in Wisconsin alongside the dedicated news team here at CBS 58. But, if you see her hanging out at the park with her son, eating at a local restaurant or walking her dog Dusty, don’t hesitate to say hello!

You can also find Amanda Porterfield on Facebook and on Twitter by following @CBS58AMANDA. We encourage you to email Amanda Porterfield’s work account with news tips and questions and emcee requests at [email protected].